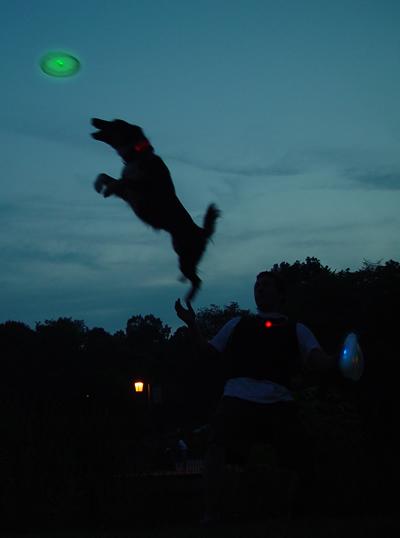 Pawsitive Vybe, a dog training school in Western Michigan, has joined forces with Playhard, Inc. in creating a new discdog show. The innovative lights-out show will feature Pawsitive Vybe's professional performance dogs doing tricks with Playhard's new light-up Flashflight Dog Discuit, a lighted flying disc created especially for dogs. Pawsitive Vybe aims to perform these shows at halftime events, festivals and other event venues.Pawsitive Vybe has completed the initial testing of the Flashflight Dog Discuit at their facility near Rockford, MI. “The disc has performed well in extreme conditions,” said Ron Watson co-owner of Pawsitive Vybe. “If only my hands could handle the environment as well as these discs,” Watson said of the sub-zero temperature tests.Cold temperature, snow and ice did not phase the Flashflight Dog Discuit. The Discuit was also unfazed by the various sets of jaws chomping on the soft but incredibly strong plastic for the first time.“The beefed up rim and new dog-proof light switch are really nice. This disc is ready to go,” remarked Apryl, Lea Watson’s partner and co-owner of Pawsitive Vybe.With preliminary testing finished and successful, Watson and Lea are working on lighting the dogs and themselves for public performance with this super cool new dog toy.Pawsitive Vybe is actively engaged in getting the word out to perspective event venues and event planners about this unique show.When asked about the project, Watson commented, “A big part of our business is teaching people how to play with active dogs. This disc needs to be in every active dog’s toy box – no more excuses about it being too dark or too late. This is going to help a lot of dogs and handlers have a better relationship. Besides, the discs are just so cool. People need to see these things in action, and we’ve got a great group of performance dogs to show them off.”Jeff Scott, vice president of Playhard, Inc., says, “Dogs and owners alike will love the Dog Discuit – from its ability to light up to its stable flight to its durable design, it will provide hours and hours of exercise and entertainment. We’re thrilled to have Pawsitive Vybe creating a new show around this fun disc – it’s sure to be a perfect marriage of first-class entertainment with a first-class product.”Pawsitive Vybe is a dog training school located in Western Michigan. Pawsitive Vybe has a strong and unique positive training philosophy that has developed through the founders' experience in dog sports, performance and positive training. Ron Watson & Apryl Lea have decades of experience in working with dogs as pet owners, professional performers and instructors. Pawsitive Vybe is dedicated to fostering a better understanding of dogs and helping dog and handler work as a team. It's all about the dogs. www.pawsitivevybe.comPawsitive Vybe 11659 Berrigan Ave. Cedar Springs, MI 49319 Training Contact: Ron Watson, Pawsitive Vybe Phone: 616.802.8923 Email: k9disc@mac.com www.pawsitivevybe.com Publicity Contact: Deb Stout, Pawsitive Doggitude Phone: 616.915.6416 Email: pawsitivedogitude@exitstout.com

06-16-2011 | Fashion, Lifestyle, Trends
Pawsitive Vybe
Frisbee Dogs Flock to Eugene, OR
Disc Dogs from all over the Pacific Northwest are converging in Eugene, OR this weekend for a Pawsitive Vybe Disc Dog Camp Hosted by FLYDO, the Flying DiscDogs of Oregon. Dog Frisbee enthusiasts from as far away as Alberta, Canada and Los Angeles, CA are gathering to enjoy 4 days of personalized instruction on the art of throwing discs to Dogs with Ron Watson and Apryl Lea of Pawsitive Vybe.
10-20-2009 | Fashion, Lifestyle, Trends
Pawsitive Vybe
Pawsitive Vybe Embarks on Dog Sport and Positive Dog Training Tour
Ron Watson, co-founder of Pawsitive Vybe, plans to tour the nation helping people to better understand and train their dog. Creator and administrator of K9Athlete.com, a Dog Sport Training community, and an expert in Dog Sports and Positive Dog training, Watson will deliver comprehensive instruction on Dog Frisbee, Positive Dog Training, Bitework and Tugging, Reactive Dog Rehab and Dog Rescue in three basic formats: Seminars (8 hour group instruction), Clinics (4
11-07-2008 | Leisure, Entertainment, Miscel …
Pawsitive Vybe
Disc Dog Community Gets Upgraded - K9Disc.com v3.0 Released
K9disc.com, the original disc dog community forum and online magazine, has gone to v3.0. Beta testing has wrapped up and the site has gotten the frisbeedog community's seal of approval. The site has moved from the Joomla 1.0.x platform to the Joomla 1.5.x platform and has added a fully integrated Agora forum for the benefit of the Frisbee Dog community. Discdog training articles and instructional videos are prominently featured onsite
01-17-2007 | Leisure, Entertainment, Miscel …
Pawsitive Vybe
Building Demolition Moves, But Can't Stop the Pawsitive Vybe
Pawsitive Vybe, a dog training school in Rockford, MI, was forced to cancel its rental agreement with Carriage House, LLC, new owners of 12 E. Bridge St. due to negative impacts upon the business of building demolition and reconstruction of 12 E. Bridge St. "We were really sad to see the old building go. We were just getting settled here and the location was just stellar," said Ron Watson, Co-Owner