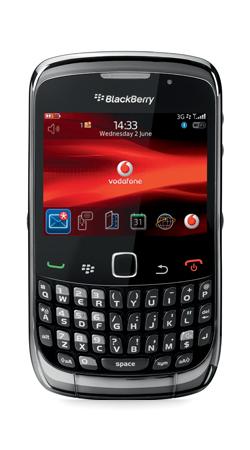 31st January - UK - Blackberry 9300 is a smart phone that comes with superbly loaded advanced features and cool design. This splendid business mobile phone is now available on PrePayMania.co.uk with Payg deal on Vodafone network. BlackBerry 9300 Curve is the cool handset that comes with 2 Mega Pixel Camera and extensive Internet connectivity features including GPRS, EDGE, Wi-Fi (802.11b/g/n), and 3G.Looking at the physical structure, BlackBerry 9300handset measures 109 x 60 x 13.9 mm and weighs 104 grams that is quite comfortable to carry. Talking about this Payg deal with Blackberry 9300, General Manager of PrePayMania, Mr Matthias Gaunt said, “Blackberry is a well-constructed smart phone that comes with dashing features including camera, Internet apps and office tools that makes is hot pick. And now customers can easily buy BlackBerry 9300 Curve within their budget as it has been involved in our Vodafone Payg stock with attractive price tag.”As per the review, this handset comes with 2.4 inches of TFT display and optical trackpad for smoother navigation of menu. The display is capable to resolute 320 x 240 pixels of resolution over 65K colours. The phone integrates massive storage capacity of 256MB and user can expand it up to 32 GB. The Blackberry 9300 comes with built-in BlackBerry OS 5.0 that gives superfast and flawless performance to the user.2 Mega Pixels of Camera offers 1600x1200 pixels and the BlackBerry 9300 Curve also facilitates easy texting and push to email and IMs features. On stock at PrePayMania, this BlackBerry 9300 with payg on Vodafone network offers great deal to the customer and one who wants to restrict their monthly usage of mobile phone, it’s perfect for them.http://www.prepaymania.co.uk/mobilephone/blackberry-9300-black-chrome-vodafone-payg.htmlAbout PrePayMania.co.uk:PrePayMania is a UK-based online portal that offers mobile phones and accessories across all major brands like Nokia, Sony Ericsson, BlackBerry 9300 Curve, Samsung, Motorola, HP, iMate, HTC, Apple, and LG. It repeatedly offers various discounts and beneficial offers to their customers on different mobile phones and mobile phones accessories which leads it to one of the leading online portal in UK. PrePayMania provides free shipping to their customer within UK on any order.Website: http://www.prepaymania.co.uk/mobilephone/blackberry-9300-black-chrome-vodafone-payg.htmlContact Us: PrePayMania.co.uk Matthias Gaunt Unit 20 Imex Tech Park, Trentham Lakes South, Stoke-on-Trent, Staffs, ST4 8LJ, United Kingdom Tel: +44 08456 77 77 55 E-mail: pr@prepaymania.co.uk

01-24-2013 | Media & Telecommunications
prepaymaniauk
HTC ONE X Jelly Bean 4.2.1 OS Updates From O2 in UK
Smart phones have now become a part of our daily lives. They assist us in our professional as well as personal lives and now have also become our social hub due to the apps connecting to various social networking sites. HTC smart phones are very much in demand all over. HTC smart phones have always maintained a path of their own and when it comes to maintain an appeal for the
03-01-2011 | Business, Economy, Finances, B …
prepaymaniauk
PrePayMania offers protective and trendy iPhone 4 Cases
1st March- UK - iPhone 4 cases are becoming the hot favorite among the mobiles users in UK nowadays and it fulfills its aim of protecting the mobile phone. PrePayMania. co. uk has recently launched very impressive and trendy collection of iPhone cases. At the launch of these collections at PrePayMania, it created much hype. It fulfills the needs of the all the genre making it a must buy. At the
02-25-2011 | Business, Economy, Finances, B …
prepaymaniauk
PrePayMania is burning with Vodafone Payg Deals
25th February -UK - PrePayMania is one of the leading online retailers for payg phones, contract phones and sim free phones in UK which has recently updated its stock of Vodafone payg phones. This Vodafone payg deals give a cost-effective solution to those who want to remain in limited budget. The massive stock of Vodafone pay as you go phones at PrePayMania includes mobile phones of most popular brands such
02-11-2011 | Business, Economy, Finances, B …
prepaymaniauk
PrePayMania Introduces PAYG Nokia 6700 On Vodafone Network
11th February – UK - PrePayMania has revealed elegant Nokia 6700 slide mobile phone with Vodafone PAYG with striking Purple colour which is really grasping the attention of stylish users. As per the Nokia 6700 review, the device integrates great social networking features, 3G connectivity and camera as well as all basic functions of calling and messaging. On this disclose, Mr. Matt Gaunt- General Manager of PrePayMania said, “With new

02-25-2011 | Business, Economy, Finances, B …
prepaymaniauk
PrePayMania is burning with Vodafone Payg Deals
25th February -UK - PrePayMania is one of the leading online retailers for payg phones, contract phones and sim free phones in UK which has recently updated its stock of Vodafone payg phones. This Vodafone payg deals give a cost-effective solution to those who want to remain in limited budget. The massive stock of Vodafone pay as you go phones at PrePayMania includes mobile phones of most popular brands such
02-10-2011 | Business, Economy, Finances, B …
prepaymaniauk
PrePayMania Releases BlackBerry 8120 Phone on Orange Payg
10th February - UK -Well-recognized online retailer for mobile phones and mobile phone accessories in UK- PrePayMania.co.uk has recently launched BlackBerry 8120 Pearl that comes with stylish and compact design. PrePayMania brings this device on Orange Pay As You Go plan and offers convenient deal to the customer those don’t want to get trapped with any contract or agreement. Talking about the BlackBerry 8120 mobile phone, General Manager of PrePayMania., Mr
02-08-2011 | Business, Economy, Finances, B …
prepaymaniauk
prepaymania
7th February - UK - HTC Wildfire, the cool and smart Android handset is now on stock at PrePayMania with Pay As You Go deal on Vodafone. Enriched with unparalleled features and decent appearance, HTC Wildfire comes with 528 MHz ARM 11 processor and smart Android OS which make is ultimate. This dominant HTC smart phone is now available on PrePayMania with Vodafone PAYG deal. On the conversation with General
02-04-2011 | Media & Telecommunications
Perpaymania
PrePayMania Brings Inexpensive Mobile Phones on Valentine's Day
PrePayMania, one of the foremost online retailers of mobile phones and accessories in UK is now offering best handsets with pretty cool deals adding the bliss to this Valentine's Day. As the Valentine's Day is not so far, people have started the preparation for the coming fiesta of romance and love. Talking about this great deal, General Manager of PrePayMania.co.uk, Mr Matthias Gaunt said "Valentine's Day is the festival in
11-29-2010 | Business, Economy, Finances, B …
prepaymaniauk
PrePayMania Brings Out HTC Smart Black O2 PAYG on Stock
The smartphones are making waves in the market and good news for cellphone lover is PrePayMania.co.uk has incorporated HTC Smart handset in the O2 Pay as You Go collection. This dashing HTC Smart Pay As You Go is an affordable handset meant for users and appears with easy-to-use features. “HTC Smart handset looks set to be a desirable handset as pretty cool features are incorporated in the smart handset. The excellent
11-29-2010 | Media & Telecommunications
Prepaymania
T-Mobile E100 Released with Great Price by PrePayMania
With the release of T-Mobile E100 on PAYG T-Mobile, PrePayMania.co.uk has added one more flip phone to its collection of flip phones Pay As You Go. It can be described as a trendy flip open handset that is available with great deal at PrePayMania.co.uk on T-Mobile PAYG. T-Mobile E100 is a really trendy and boasting funky style with lots of huge innovations. Presenting the T-Mobile E100 Flip on T-Mobile PAYG, Mr.
Comments about openPR
I can't but agree to the positive statements about your portal: easy to use, clear layout, very good search function, and quick editing!
Jens O'Brien, Borgmeier Media Communication