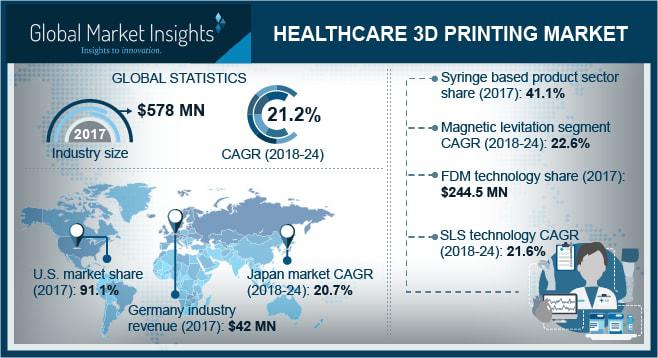 Once thought of as a sci-fi notion, 3D printing has now penetrated myriad sectors, healthcare 3D printing market bearing no exception. Speculated as one of the most disruptive technologies of recent times, 3D printing, with its highly advanced technology, involves the build-up of solid 3D objects from a digital prototype, assembling consecutive material layers on top of one another, that eventually gives rise to the completed object. The technology has been touted by industry gurus as one of the most revolutionary ones in the last few years, given its extensive proliferation in the manufacturing, automotive, construction, chemicals, food & beverage, and medical sectors.A comprehensive detailing of the ground-breaking innovations and organizational efforts that may revolutionize healthcare 3D printing industry:The application of 3D printing in healthcare market heavily leans toward prosthetics, customized implants, & bioprinting. In 2015, a team of doctors at the Bengaluru-based Sakra World Hospital performed India’s supposedly first endoscopic surgery on a 5-month old girl with fused skull bones, with a 3D-printed helmet that exerts pressure on the required parts of the skull. The party behind this marvel had been Osteo3D, a phenomenal upstart in healthcare 3D printing industry, that had designed a personalized helmet for the surgery. Today, this tenderfoot in healthcare 3D printing market designs 3D-printed prototypes for surgeries, dental implants, maxillofacial surgeries, and neurosurgeries, and has contributed its models for more than 350 surgeries so far.Request sample copy of this report @ https://www.gminsights.com/request-sample/detail/1997Recognizing the need for high-grade 3D printing in healthcare industry, the National University of Singapore Centre for Additive Manufacturing plans to develop, enhance, and deploy 3D printing technology in the medical sector, with reference to which the institute has launched a new knowledge center worth USD 18 million. The highlighting factor in this agreement is that four major conglomerates – Osteopore International, Creatz3D, Forefront Additive Manufacturing, and Dou Yee Enterprises have signed MoUs with the center. This is indicative of the robust penetration of 3D printing in healthcare market across various geographies.As recently reported by the Dubai Health Authority, a 60-year old woman from Oman suffering from cerebral aneurysm underwent a complicated surgery that was met with unexpected success, which can be solely credited to the creation of the 3D model of the patient’s brain. The complexity of the patient’s condition prompted the doctors to create a state-of-the-art 3D prototype of her brain dilated arteries that allowed them to understand how to plan the surgery using the safest, low-risk approach. Touted as one of most brilliantly articulated approaches for complex surgeries, 3D printing will transform the perspective of doctors toward operations, which will tantamount to an upswing in healthcare 3D printing market share.Aspect Biosystems, a Canada-based biotech firm has recently declared a partnership with DePuy Synthes Products Inc., with an aim to reinvent the growth curve of 3D bioprinting and by extension, effectuate developments in healthcare 3D printing industry. Facilitated by Johnson & Johnson, this agreement states that Aspect’s massive 3D bioprinting platform will be used to develop a 3D-printed knee meniscus for surgical therapy, that will act as a cushion between the shinbone and the thighbone. Considering the ever-growing pool of elderly patients suffering from osteoporosis, surgical treatment of a torn meniscus via 3D printing will garner positive acclaim worldwide, leading to the widespread commercialization of 3D printing in healthcare market.Make Inquiry about this report @ https://www.gminsights.com/inquiry-before-buying/1997Shrewdly leveraging on the profitability quotient of 3D printing in healthcare industry, Italy-based OXYDO has collaborated with Materialise NV and the Safilo Group to manufacture 3D printed eclectic eyewear brands. Marking the preface of a revolutionary trend in both, healthcare 3D printing industry and eyewear market, OXYDO proudly showcased its eyewear collection recently, depicting frames using less material. OXYDO’s eyewear range combines the classic frame styles with modern silhouettes by means of 3D printing, setting a precedent for other healthcare 3D printing market giants to follow.How the future looks like for healthcare 3D printing industry:Numerous other innovations prevalent across healthcare 3D orienting market include the creation of 3D-printed skin, 3D-printed ears, as recently developed in Scotland for Microtia-affected kids, and even 3D-printed hearts, liver, and other vital organs. While the scenario looks very promising, it does have its share of flaws, given that every patient has a distinguished genetic system.Several questions regarding the credibility and conformity of this technique have been raised by consumers and experts alike. The deployment of 3D printing in healthcare market, for most parts, is still in the experimental stages, while for many other sub-verticals, the technology has already been implemented, and has met with transcendent success. Some of the essential factors that may have a profound consequence on healthcare 3D printing market are the type of materials used for 3D printing, the cost of printers, and the convenience factor of the methodology used for implementing the software.Despite having depicted a commendable success rate in many vital application arenas, healthcare 3D printing market has not yet gone mainstream. However, analysts have forecast global 3D expenditure to surpass USD 28 billion by 2020, a major chunk of which will be procured by the medical sector. All in all, the potential for 3D printing continues to remain colossal, and expert consensus specifically gestures toward the notion that healthcare 3D printing market, slated to cross USD 2.2 billion by 2024, will bring about a conspicuous revolution across the medical fraternity in the many years to come.Global Market Insights, Inc., headquartered in Delaware, U.S., is a global market research and consulting service provider; offering syndicated and custom research reports along with growth consulting services. Our business intelligence and industry research reports offer clients with penetrative insights and actionable market data specially designed and presented to aid strategic decision making. These exhaustive reports are designed via a proprietary research methodology and are available for key industries such as chemicals, advanced materials, technology, renewable energy and biotechnology.Arun Hegde Corporate Sales, USA Global Market Insights, Inc. Phone: 1-302-846-7766 Toll Free: 1-888-689-0688 Email: sales@gminsights.com Blog : http://news-researchers.com/

05-07-2021 | Advertising, Media Consulting, …
Global Market Insights, Inc.
Air Compressor Market with COVID-19 impact by Design, Business, Application and …
The global air compressor market size is expected to reach USD 107.5 billion by 2026, progressing at a CAGR 5.2% over the forecast period, according to a new report by Global Market Insights, Inc. Global air compressor market is expected to surpass the valuation of $107.56 billion through 2026.Increasing global demand for industrial refrigeration chillers is set to drive the global air compressor market growth over the forthcoming timeframe. Increasing prominence
05-07-2021 | Advertising, Media Consulting, …
Global Market Insights, Inc.
Increasing Need for Proper Animal Nutrition to Foster the Demand for Yeast Marke …
Consider the following pointers: • In 2016, nearly 50 zoo animals were declared dead in the Venezuelan capital of Caracas, mainly due to prolonged starvation or improper nutrition in the feed. • Approximately 350 million tons of meat is being consumed worldwide every year. The above-mentioned figures and statistics are a testament to the fact that lack of proper components in the animal feed can have an influential impact on both animals and
05-07-2021 | Business, Economy, Finances, B …
Global Market Insights, Inc.
Vacuum Pumps Market to 202, Future Outlook, COVID-19 Impact Analysis, Forecast 2 …
Vacuum Pumps Market size to Hit $7 Billion by 2026 with CAGR of 7.1% from 2020 to 2026. The vacuum pumps market size is anticipated to surpass USD 7 billion by 2026. The global vacuum pumps market size is anticipated to depict quite an expansion in the years ahead, driven by the robust growth of the electronics and semiconductors sector worldwide. The advent of e-commerce and the rising number research programs
05-07-2021 | Business, Economy, Finances, B …
Global Market Insights, Inc.
Conveying Equipment Market size is anticipated to witness healthy growth through …
The conveying equipment market size is expected to exceed more than US$ 65 Billion by 2026; Growing at a CAGR of more than 3.5% in the given forecast period 2020 to 2026. Ongoing investments by top retail players, alongside e-Commerce industry expansion, are expected to give conveying equipment market share a substantial boost over the projected timeframe. For instance, Alibaba Group Holding Ltd. announced the commercial platform expansion to small U.S. businesses

06-04-2019 | Health & Medicine
Pabst Science Publishers
Health literacy: How to improve health behaviors
Health literacy is defined as "people´s knowledge, motivation and competences to access, understand, appraise and apply information to make judgements and take decisions in everyday life healthcare concerning disease prevention and health promotion to maintain and improve quality of life during the life course." In a new volume Anne-Kathrin Mayer and colleagues shed light on the concept of health literacy from different disciplines: psychology, educational sciences, health sciences and
06-03-2019 | Health & Medicine
World Congress on Mental Health
Mental Health 2019
PULSUS brings in a new spin on conferences by presenting the latest scientific improvements in your field. Listen to motivating keynotes from thought leaders or rub elbows with pioneers across the globe. London is all set for an amazing event as PULSUS proudly presents the “World Congress on Mental Health” scheduled on November 13,14, 2019 at London, UK. PULSUS cordially welcome researchers, academicians, students and business professionals in the field
02-04-2019 | Business, Economy, Finances, B …
GetSavvi Health
GetSavvi Health - For Health Insurance Needs
GetSavvi Health offers health insurance, which includes basic and primary care at affordable prices. The company believes in the fact that South Africans are hard working and each of them deserve access to affordable and high-quality healthcare facilities and that too at affordable prices. The company desires to be a leader in the primary healthcare sector. Primary care is all about basic healthcare facilities through day-to-day benefits, which help in
11-05-2018 | Health & Medicine
LexisConferences
MENTAL HEALTH NURSING, PUBLIC HEALTH AND HEALTH CARE SUMMIT
Psychiatric and Mental Health Nursing 2019 will prove to be a noteworthy event, with this we cherish mental health nursing by embracing the theme, “Fore-fronting nursing care to achieve mental wellness” , and would step forward to provide an opportunity to step in and join our family, as we bring and encourage to join professionals from the following areas of Mental Health, Psychology, Nursing, Physiology, Neurology, Healthcare, Education, Business to
07-24-2017 | Health & Medicine
MarketResearchReports.biz
TrendSights Analysis: Guided Health
"TrendSights Analysis: Guided Health", explores what the Guided Health trend is, why it is important, who is most influenced by it, and how brands and manufacturers can capitalize on it. The research concludes by identifying where the trend is heading next and how long it will last. In the information economy, health-conscious consumers now more confidently embrace an abundance of new information tools, enabling more health-driven choices. Consumers are seeking conveniences
06-16-2017 | Health & Medicine
Pharmaceutical By CMI
Pet Health Products Market
A pet or companion animal is an animal kept primarily for one's company, protection, or entertainment. Popular pets are regularly noted for their attractive appearances and their loyal or playful personalities. While dogs and cats are the most preferred pet animals, people also keep house rabbits, fancy rats, guinea pigs, parrots, chickens, and aquatic pets. The trend of pet adoption and keeping is gaining rapid traction across the globe. The
Comments about openPR
OpenPR is clearly structured and remains true to its principle of confining itself to the essential parts. OpenPR has proven to be a very good and reliable partner to our media agency: Within the shortest time the releases are online and go down well with the media representatives. The success of OpenPR is reflected in the steadily increasing number of press releases. It is good that OpenPR exists!
Ursula Koslik, Director Marketing & PR, F+W Hamburg