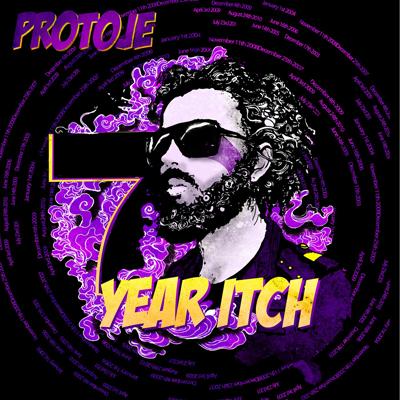 Los Angeles – January 25th 2011‐ Reggae revolutionary Protoje releases his long‐awaited debut album, “Seven Year Itch” on Don Corleon Records, January 25, 2011. The album comes after the success of several already released singles (all on the album), including hit “J.A.” and lead single, “Rasta Love” featuring Ky‐Mani Marley. “Seven Year Itch” arrives to an anxious crowd who has come to know Protoje from his intimate performances in Jamaica’s live music scene, to his phenomenal performances on the prestigious stages of Caribbean Fashion Week and Reggae Sumfest. Protoje has passed on opportunities to put his voice to many mainstream riddims, instead remaining focused on the art itself, perfecting his performance and writing the songs on “Seven Year Itch.” The resulting album is sure to both inspire and enlighten Reggae admirers who long for the raw style revolutionized by artists in the 1960s, but with enough modern vibe to relate to a brand new century.Protoje explains, "This album documents my journey since I started doing music and if it listened as a whole work it will give a clearer understanding you know, all the songs are connected in one way or another. I just ask for people to share this music once they like it, spread music spread love." Protoje was born in the 1980’s but wishes he had been born in the 1960’s. Like the Reggae artists who began their revolutionary movement at that time, Protoje aims to free the people of their societal shackles through art, and reinforce the hope that dwells in the hearts of young Jamaicans and people all over the World. One of the most recognizable Reggae artists of that era, Bob Marley’s mantra was to “free the people with music.” As Protoje follows suit, he wants to not only free the people with contribution of music, but also through the art of other visionary artists, be it literary, visual, or another form.“Seven Year Itch” captures those feelings and motivations with catchy songs that cry for peace and prosperity for all, such as “After I’m Gone” featuring Jah9, and “In The Streets,” a simple yet powerful song about a man’s desire to see his children play safely in the streets. The first single off the album, “Arguments,” speaks of trivial quarrels between lovers, and the upbeat “Overtime” explores the joy and merriment that the love of another can bring. Look out in coming weeks for the official music video for the lead single, “Rasta Love,” and additional tour dates following a string of European shows in February.To preview the album, click here:http://itunes.apple.com/us/album/seven-year-itch/id412959410 www.protoje.com www.doncorleonrecordsonline.com For more information please contact: Heather Noonan / BFM Digital at pr (at) bfmdigital (dot) com or 818‐762‐0191.About BFM Digital, Inc. BFM Digital is a global digital music company committed to serving the independent music community and delivering quality music, spoken word and video content to leading online retailers worldwide. Representing a diverse catalog of indie labels, artists and publishers, BFM distributes to all of the major music services including iTunes, Amazon, Rhapsody, eMusic, Napster, Walmart, Nokia and many more. With an unparalleled commitment to personalized service, BFM works closely with their content providers from around the world to ensure maximum exposure of their catalog by customizing marketing efforts and building strong relationships with BFM's digital store partners.12650 Riverside Dr. Ste. 203 Valley Village, CA 91607