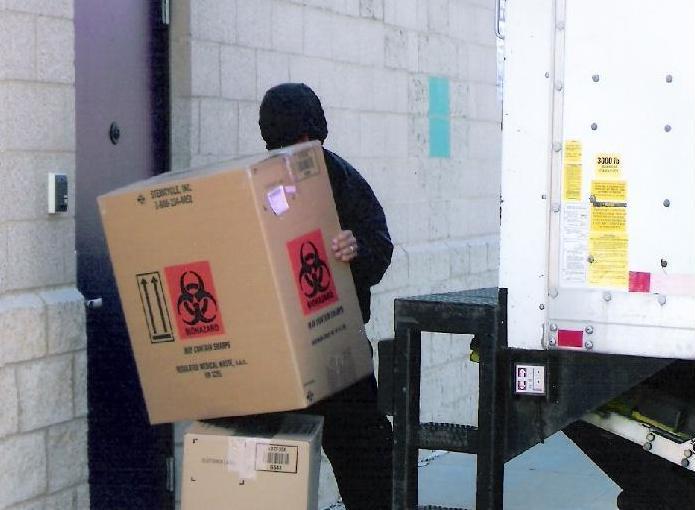 PHILADELPHIA – Repent America (RA) has launched a nationwide effort called the Campaign to Stop Stericycle (CSS), which aims to expose America's leading medical waste disposal company for their collection, transportation and incineration of aborted children and the instruments used to kill them. Included in the launch of the campaign is the official announcement of StopStericycle.com, a website dedicated to revealing the overwhelming evidence of Stericycle's collaboration with the abortion industry. While this month marks 38 years since the unlawful Supreme Court decision in Roe v. Wade, which has resulted in the violent deaths of fifty million children and counting, CSS is marking the end of our nation's deadly silence toward those that facilitate the abortion industry as it hurls a stone at this medical "waste" Goliath.

Stericycle, whose profits total over a billion dollars in annual income, generates a portion of their sales revenue from services provided to abortion mills. One of Stericycle's largest clients is Planned Parenthood, which maintains a national account with the medical "waste" service. In recent years, Stericycle has acquired countless medical waste companies until it has become the premiere "waste" collection service to abortion mills nationwide. Consequently, the war on abortion has consolidated to the point where stopping this one giant could deliver a gigantic blow to the abortion industry.

Stericycle's collaboration with the abortion industry by collecting and incinerating murdered children is eerily reminiscent of the corporate collaboration of the Holocaust of the 1940's. During the Holocaust, the Nazi regime depended heavily on businesses to accomplish their evil schemes. Sadly, instead of condemning the mass murder of the Jewish people, a number of large corporations chose to aid the Nazi government in their plans by providing services and materials. In the end, those businesses were brought to justice as court tribunals proclaimed that those who aided and abetted murderers were equally as guilty as those who committed the acts themselves. Likewise, Stericycle must be called to account for their willful involvement in the furtherance of the abortion holocaust.

"It is sick beyond words that businesses like Stericycle are profiting from collecting murdered children and incinerating their bodies with the trash. What's more is the abominable child killing that has been tolerated in our nation for 38 years," campaign director Michael Marcavage stated. "While many have focused their efforts on overturning Roe v. Wade by putting their trust in corrupt judicial systems and politicians, they have neglected the necessity of pursuing those that enable abortion mills to operate in the first place," he added. "Without Stericycle and companies like it, the abortion industry would collapse," Marcavage concluded.

The evidence of Stericycle's collaboration with the abortion industry displayed on Stop Stericycle.com includes candid documents signed by abortion mills that confirm their use of Stericycle and their disposal of human "tissue," photographs of Stericycle removing large boxes and bins from abortion mills nationwide and explosive recorded telephone discussions with Stericycle representatives, who graphically explain the protocol for the packaging of "tissues...and human parts." Additionally, the site provides information about Stericycle's corporate leaders, as well as the top shareholders and mutual fund investors that are profiting from the blood money that Stericycle receives from its service to the abortion industry.

StopStericycle.com also outlines the truck companies that are currently leasing vehicles to Stericycle, which is the medical waste giant's primary means of collecting and transporting aborted children to their incineration plants, such as Stericycle's Haw River location. CSS has been urging these companies to stop allowing their trucks to be used for such purposes, and has already seen progress as Penske Truck Leasing has now prohibited Stericycle from using their trucks to service to abortion mills. In fact, Penske Truck Leasing President and CEO Brian Hard vowed in an e-mail to the campaign, "We have been, and you have my word that we will continue to be, proactive in stopping Stericycle from using our trucks to service abortion clinics." CSS is urging several other truck leasing companies to do the same, including Ryder System, Inc.

"It is high time for businesses to follow Penske's lead and remove themselves from supplying the means for Stericycle to service the abortion industry. Those that willingly help Stericycle in this manner will be met with much public resistance," Marcavage firmly stated. "We will not sit idly by waiting upon the reversal of Roe v. Wade, which is not the law and never has been. We are committed to aggressively pursuing and exposing Stericycle, it's officers, suppliers and investors until this Goliath stops furthering the abortion holocaust in our nation," he concluded.

"Open thy mouth for the [voiceless] in the cause of all such as are appointed to destruction." - Proverbs 31:8

The Campaign to Stop Stericycle, a project of Repent America, is a nationwide effort to expose and reprove Stericycle, the nation’s leading medical waste disposal service, for their collection, transportation, and incineration of aborted children.

10-01-2018 | Fashion, Lifestyle, Trends
CSS Coatings
CSS Coatings Provides Customized Solutions to Clients Belonging To Different Ind …
The company offers reliable installations for epoxy, metallic and MMA flooring Kentucky, USA – September 28, 2018: CSS Coatings has grown to become one of the top industrial flooring solution providers. Their services, which include an array of flooring solutions under one roof, have captured the attention of many businesses in the U.S. They provide a variety of flooring options including but not limited to 3D flooring, MMA flooring, metallic epoxy
04-04-2018 | Fashion, Lifestyle, Trends
CSS Coatings
CSS Coatings Provides Wide Range of 3D Epoxy Flooring Options
CSS Coatings adds some personality and depth to the floors of its clients in Kentucky, Texas, Indiana, and Ohio Kentucky, USA – April 4, 2018: Spearheaded by company president Mr. Jeremiah Mitchell, CSS Coatings is a major player in the floor coating industry. The company has a broad service area as it offers metallic epoxy flooring solutions to its clients in Kentucky, Indiana, Georgia, Texas, Ohio, and North Carolina. The company is
05-17-2017 | IT, New Media & Software
MarketResearchReports.biz
Global Customer Self-Service (CSS) Software Industry 2017, Trends And Forecast R …
"The Report Global Customer Self-Service (CSS) Software Industry 2017, Trends and Forecast Report provides information on pricing, market analysis, shares, forecast, and company profiles for key industry participants. - MarketResearchReports.biz" About Customer Self-Service (CSS) Software market Customer Self-Service (CSS) Software Report by Material, Application, and Geography Global Forecast to 2021 is a professional and in-depth research report on the world's major regional market conditions, focusing on the main regions (North America, Europe
05-21-2008 | IT, New Media & Software
Cybernet-SlashSupport (CSS)
CSS (Cybernet-Slashsupport) Strikes Partnership With South African Firm
Chennai based Offshore Technology Operations Management (TOM) company CSS (Cybernet-SlashSupport), has announced that it has signed a partnership with mySolutions, a Pretoria, South Africa headquartered IT solutions company for its expansion into the technology services and support market in Africa. CSS, which provides IT services including Tech Support, Remote IMS and Software Testing & Development, employs around 5000 employees at its offshore facilities in Chennai and Coimbatore. The company also has
02-20-2008 | IT, New Media & Software
PSI AG
ERP Standard PSIpenta Receives Own Financial Package - PSIPENTA and CSS agree to …
Berlin, 20 February 2008 – The ERP-manufacturer PSIPENTA Software Systems GmbH, a wholly-owned subsidiary of Berlin’s PSI AG, is expanding its product portfolio. In cooperation with Fulda’s CSS GmbH, one of the leading providers of solutions for finances and human resources, a new application for accounting, especially-tuned for the ERP suite PSIpenta will result. The new module with the name PSIpenta finance uses the powerful eGECKO platform of the widely used
11-20-2006 | IT, New Media & Software
WebAsyst
WebAsyst Announces New CSS Interface
(WebAsyst LLC, Wilmington, DE, USA) WebAsyst LLC announces a major upgrade that affects all applications of WebAsyst Suite, its family of web-based collaborative software products (http://www.webasyst.net). The company developers have redesigned the WebAsyst user interface, which is now 100% CSS-based. The underlying mechanism of the updated interface is CSS (Cascading Style Sheets). This allows WebAsyst users to separate presentation from structure and behavior, and makes user interface elements less code-dependent. This
Comments about openPR
Your portal is fast, simple, and easy to use. Others may have more functions but they also demand more editing time, you have to preformat the text in order to achieve a good result etc. I think openPR is really fantastic!
Andreas Knepper, wallmedien AG