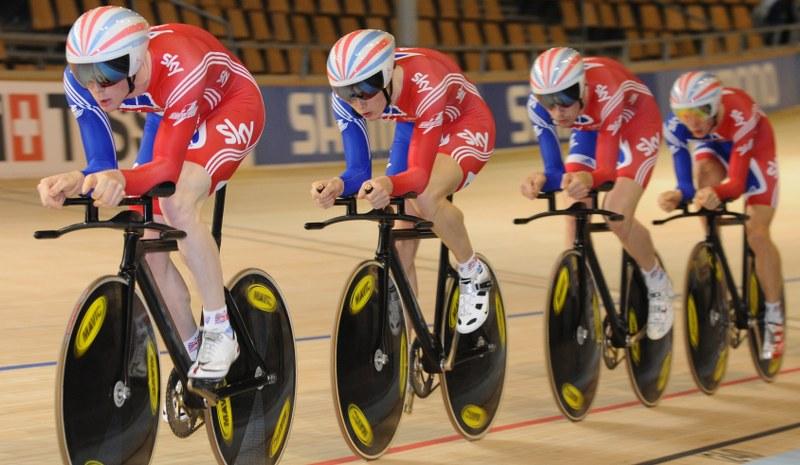 Winning is all about having the ‘edge’, according to Nigel Mitchell, Head of Nutrition at British Cycling. In recent years the team has pedalled to the top of the sport and they want to keep it that way. Over the past 18 months British Cycling has been working with Manchester-based sports nutrition specialist CNP Professional, developing diets and products designed to fuel the Great Britain Cycling Team’s continuing success. Now British Cycling has appointed CNP as its official supplier. Mitchell describes working with CNP as “a really successful partnership”. The first products they have developed are two energy supplements, Pro-Energy Max Gel and its caffeine-free sibling Pro Energy Gel, both of which are formulated to deliver not just an initial kick but a sustained boost to riders’ energy levels. The gels are just the start. “We are already planning exciting future projects that we believe will help give us a competitive edge,” says Mitchell. One of the key areas that cyclists need to understand more is protein, according to Kerry Kayes, founder of CNP. “Protein supplements can have a huge impact in the sport,” he explains. “They protect, rebuild and repair muscles during and after intensive exercise. This helps prevent long term injury and means cyclists recover more quickly, can train harder and thus improve performance.” Mitchell agrees. “In the past, cycling focussed on energy. But when you exercise, there are changes in the body: muscle is broken and rebuilt. Supplements can be a very useful and convenient way of supplying the protein the athlete requires. In order to minimise exercise stress, the supplements need to contain quality protein.” Quality was a key reason for selecting CNP. The company’s premier proteins are ‘undenatured’ which means they are made using a low temperature processing method that preserves their integrity, so they are more easily absorbed into the body. Most manufacturers use ‘denatured’ proteins, made with a heat processing method. "Undenatured protein supplements cost more to produce but, because they work better, they give our athletes an advantage,” says Mitchell.As official supplier to British Cycling, CNP is already providing a range of protein supplements to the team including Pro Energy, a time-released energy bar, Pro Flapjack, for energy and muscle repair and Pro Peptide, an advanced protein supplement. Two of Mitchell’s favourites are Pro Recover, a post-race recovery supplement, and Pro MR, an advanced meal replacement, which he describes enthusiastically as “five products in one.” He explains: “For example, as well as a variety of proteins, Pro MR’s ingredients include probiotics. They help promote and preserve a healthy gut which is vital in cycling.” CNP Professional is one of the UK's leading sports nutrition specialist companies. For more information visit www.cnpprofessional.co.uk, or call +44 (0) 161 368 0942 for sports nutrition advice and +44 (0) 161 368 3850 for sales.CNP Professional is a sports nutrition specialist and one of the UK’s main protein supplement suppliers. It is also a leading brand in the bodybuilding sector. Now CNP is leading the way in researching the potential benefits of protein supplements to improve athletic performance in sports as varied as cycling, boxing, football, running and rugby. Kerry Kayes, the founder of CNP Professional, is a former national bodybuilding champion. He has been involved in sports nutrition for many years and his dietary expertise has established him as ‘the man in the know’ to a wide variety of sportspeople worldwide such as the Ericsson Round the World Yacht Team, boxer Ricky Hatton, dart’s champion Phil ‘The Power’ Taylor, international strongman Glen Ross and Sean Long of Hull FC.CNP Professional Unit 11 Hyde Point Dunkirk Lane Hyde Cheshire SK14 4NL Press enquiries: Toni Turner or Alison Haynes at The Publicity Works Tel: +44 (0) 1263 761000 Email: cnp@publicityworks.biz For more news about CNP Professional visit the press office at www.publicityworks.biz Paul Riley, Marketing Manager, CNP Professional: +44 (0)161 368 3850

02-25-2011 | Sports
CNP Professional
Cyclo-Cross: CNP Sports Supplements Inspire Victory.
Helen Wyman, six times British champion Cyclo-Cross winner, is having an excellent winter season. She has just clocked up her sixth win. On a particularly heavy course in Heerlen, Holland, Helen moved away from the chasing riders with ease over the 5 laps and finished more than a minute ahead of World Cup Winner Sanne van Paassen. As this is one of the last races of the season, Helen is pleased
02-10-2011 | Sports
CNP Professional
Craig Bellamy’s Gym Slips CNP Professional Protein Supplements Onto Menu
Given his tough reputation it’s probably no surprise that footballer Craig Bellamy is a martial arts fan. Now he’s opened Cardiff Combat, an MMA (mixed martial arts) gym in Allensbank Crescent, to give local youngsters and professionals a boost. To help his members get the very best advice and training, Bellamy has been pulling in a few favours from his footballing connections and recently persuaded sports nutrition
01-19-2011 | Sports
CNP Professional
CNP supplements protect the young rugby players at Hartpury College
Hartpury College’s Rugby Academy began in September 2000 in partnership with local Guinness Premiership side Gloucester Rugby. Hartpury College takes promising young players of 16 to 18+ years of age and equips them with the skills and knowledge needed to take them into the professional and semi-professional world of rugby. Through a carefully designed strength and conditioning programme it nurtures talent, building the players’ confidence and strength. It’s a demanding
11-15-2010 | Sports
CNP Professional
Protein Supplements from CNP Help British Cycling to Best Road Results for 43 Ye …
When British Cycling achieved its best Road World Championships results for 43 years at Melbourne in October 2010, it showed how far the GB Cycling Team has progressed. Sports nutrition plays a key role in giving the Brits a cycling ‘edge’, but recently they have been benefitting from a new strategy: using protein supplements to get the best out of their bodies. Nigel Mitchell, Head of Nutrition at

04-20-2022 | Fashion, Lifestyle, Trends
AA meetings
Pico Buds Pro Reviews: Truth About Pico buds pro.
Pico buds pro has been trending in Argentina, US, Israel and other countries. Indeed the idea is great. With it, you will access the sound no matter where you are. Fits very comfortably with discreet design. It is an exceptional hearing aid at an amazing price. a lot of people have shown genuine interest in buying them, truly the idea is Unique. Generally, most hearing aids reviews have attracted positive
02-21-2022 | Fashion, Lifestyle, Trends
EasyTrim Pro
EasyTrim Pro Review 2022: Is EasyTrim Pro Worth It?
Hair clipping at home may often be a source of frustration. We have selected the most effective multi-purpose trimmer for you. Take a look at the EasyTrim Pro Review. Before making a purchase, have a look at some of the incredible features and prices. Before releasing any new product, we at Review Ecstasy do extensive market research. Let's get right into the subject of this particular hair trimmer right away. What is
11-07-2021 | Energy & Environment
Boltz Pro
Boltz Pro Review: Where to Buy Boltz Pro Charger
Visit Official Website Here >> https://bit.ly/3H2mhqu Boltz Pro Charger Recently launched, this adaptable phone charger is powerful and can charge all your devices simultaneously with its 4 charging ports. The QC 3.0 technology is four times faster, so you can go from 0% to 70% in just 35 minutes. Our hands are more connected to our smartphones than ever as the world changes. Our smartphones are always with us. Our smartphones allow
10-20-2021 | Health & Medicine
Revitaa Pro Review
Revitaa Pro Reviews - revitaa pro weight loss consumer report
Visit Official Website Here >> https://bit.ly/3pjg3fN Worldwide obesity tripled from 1975 to 2016, as per WHO published report. In today’s era of rapid urbanization, and globalization, the mode of eating, working, transport, and physical activity changes drastically. Today, there is a difference between the calories consumed versus the calories spent. In the current working scenario, there is an increasing trend of physical inactivity. People of different age groups are gaining tremendous
07-24-2021 | Fashion, Lifestyle, Trends
Boltz Pro Charger
Boltz Pro Review: Boltz Pro Charger, Is It Legit?
Boltz Pro Review: The need to use mobile devices is becoming increasingly prevalent. They make it easier to communicate, provide access to resources, and help people navigate, among other things. It is critical to ensure that a device is fully charged for such applications. A common issue with the average adaptive charge is that even after the device has been fully loaded, it will continue loading. In particular, it can be
01-13-2021 | Health & Medicine
TotalTrim Pro
TotalTrim Pro Review-Does TotalTrim Pro Work-Complete Info
TotalTrim Pro is a cordless hair clipper grooming kit that offers get entry to to professional grooming movies as well, teaching users a way to emerge as their very own barber with numerous tutorials. The clippers offer clip-on manual combs and anti-rust blades to give the precision that purchasers want to have for their precise appearance whether cutting, trimming or styling. With FREE Access to Professional Barber Master Classes, the
Comments about openPR
OpenPR is clearly structured and remains true to its principle of confining itself to the essential parts. OpenPR has proven to be a very good and reliable partner to our media agency: Within the shortest time the releases are online and go down well with the media representatives. The success of OpenPR is reflected in the steadily increasing number of press releases. It is good that OpenPR exists!
Ursula Koslik, Director Marketing & PR, F+W Hamburg