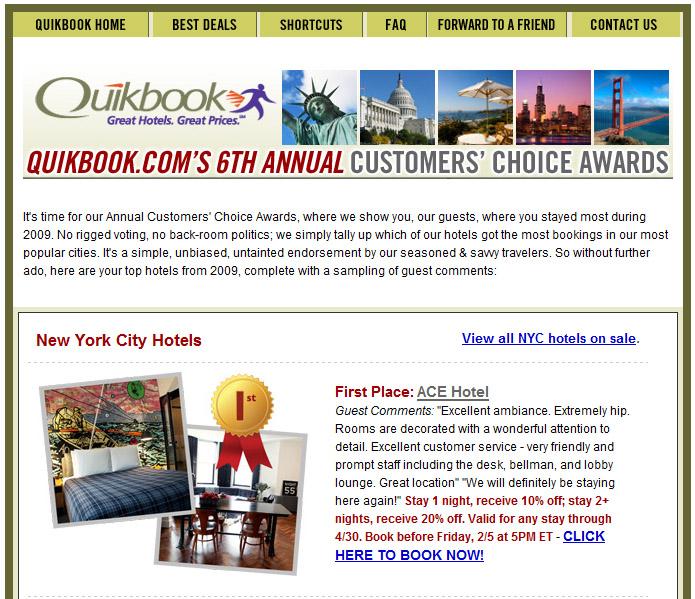 Quikbook.com, the well-established hotel booking service, releases booking preferences on hotels where their travelers stayed most during the calendar year 2010. As the year came to an end, Quikbook.com reviewed the total reservations numbers in the past year and will disclose the top three most popular hotels for each of the six major destination cities. The official 7th Annual Customers’ Choice Awards, including guest comments and special offers, is scheduled to be published through Quikbook.com’s Weekly Deal Alert on Tuesday, January 25th. Guests can receive the Awards email by signing up prior to the 25th. Quikbook.com selected their six most booked cities, including New York City, Chicago, Los Angeles, Washington DC, San Francisco, and Miami. Along with the top three most booked hotels, Quikbook.com shared guest comments that reinforce the reasoning behind guests’ hotel preference.New York City topped the Quikbook.com list as their most booked city for the 7th year in a row, with Smyth – A Thompson Hotel being the top hotel that their guests booked the most. The complete list of top booked follows:New York City Hotels 1/ Smyth – A Thompson Hotel 2/ Affinia Shelburne 3/ The Time HotelChicago Hotels 1/ Dana Hotel and Spa 2/ Affinia Chicago 3/ Whitehall HotelLos Angeles / Santa Monica Hotels 1/ Sofitel Los Angeles 2/ Loews Santa Monica 3/ Thompson Beverly HillsWashington D.C. Hotels 1/ Donovan House 2/ Liaison Capitol Hill 3/ The ChurchillSan Francisco Hotels 1/ Clift, A Morgan’s Original 2/ The Huntington Hotel & Nob Hill Spa 3/ Sir Francis Drake, A Kimpton HotelMiami Hotels 1/ Gansevoort 2/ Angler’s Boutique 3/ The NationalFor the NYC market, Affinia Shelburne returns as a long-time favorite with travelers. Smyth and The Time Hotels are new but not surprising entrants to the Choice Awards as they have been continually offering enticing deals for the New York travelers in 2010. Many guests comment that their hotel choices are usually influenced by current promotions, hotel amenities, and hotel location.While Clift Hotel remains the first choice for San Francisco travelers just as in the previous year, all of the other favorite hotels in the “sunny” cities LA, San Francisco, and Miami, have been replaced by hotels that continuously provide great service to their guests and offer competitive prices. This set of hotels stands out for Quikbook.com customers for their luxury hotel features and attention to detail.Chicago’s favorites include Dana Hotel – a boutique style hotel on Michigan Ave, the sleek and modern Affinia Chicago, and a recently restored Whitehall Hotel.Washington D.C. travellers chose Donovan House and Liaison Capitol Hill, just as in the previous year. The Churchill Hotel is a new favorite for D.C. goers – mainly for its prime location in the heart of Washington D.C. and recent renovation.What Travelers Want Most in a Hotel in 2011?Hotel Deals & DiscountsPrice is a major factor when selecting a hotel and will remain the #1 consideration for travelers in 2011. Quikbook.com negotiates directly with hotels, which in turn allows consumers to get the very best deals on their stays. These deals are not available anywhere else online. The best way to stay informed of all current deals and hotel sales is Quikbook.com’s E-mail newsletter that arrives every week with exclusive sale announcements.PerksConsumers love to get free stuff and special treatment and the hotel industry is no different. Free high speed wireless internet is becoming an increasingly desired amenity. Another sought after convenience is free access to a fitness center and complimentary breakfast.First established in 1988 as a toll free call center, Quikbook.com offers a select list of hotels across the US, often at rates lower than anywhere else. For over 20 years, Quikbook.com has solely specialized in booking hotel rooms at the lowest rates for consumers. Voted the #1 travel Website for booking hotels by SmartMoney magazine, Quikbook.com boasts an inventory of more than 1,200 upscale and boutique properties in more than 75 cities and resort destinations throughout North America. The website is free to consumers and charges no membership fees, no fees to change or cancel existing pay-at-checkout reservations, and does not tack on booking fees or surcharges. For further information visit www.quikbook.com.Quikbook.com 381 Park Avenue South New York, NY 10016, USABrian Hendricks 212-779-7666 x3045 brian@quikbook.com

09-23-2011 | Tourism, Cars, Traffic
Quikbook
Sneak A Peek at the New Quikbook.com: Established Online Travel Agency Reveals a …
Quikbook.com has unveiled their new website look and introduced an improved boutique hotel search engine with advanced filtering features. The company has been in continuous operation since 1988 and this is the first major website redesign since 2003. Quikbook’s customer base has remained loyal for many years and enjoyed hotel discounts at many of the top boutique hotels in cities across the United States. Quikbook.com’s staff specializes in dealing with
05-10-2011 | Tourism, Cars, Traffic
Quikbook
Yotel New York Teams Up With Quikbook.com Online Travel Agency To Offer a 2-Nigh …
Quikbook.com, the hotel booking company best-known for their hand-picked selection of unique and boutique hotels is teaming up with YOTEL to offer one lucky Quikbook.com fan a free 2-night stay at the soon-to-open YOTEL NYC hotel. Yotel is a brand new revolutionary hotel that is set to open its doors in NYC this summer. The hotel group which draws on influences of airline travel and luxury yachts, features 669 stylish rooms,
05-04-2011 | Tourism, Cars, Traffic
Quikbook
Hotel Reservations Service Quikbook.com Announces Stay-in-May Promotion for Trav …
Quikbook.com, an online travel agency specializing in hand-picked boutique and independent hotels across the USA, is offering a $15 Amazon.com gift code to anyone who completes reservations with an arrival and/or departure date in the month of May, 2011, on Quikbook.com. The promotion is not valid if the booking is cancelled. However, there is no limit to the number of $15 Amazon.com gift codes a single user may
12-22-2010 | Tourism, Cars, Traffic
Quikbook
Hotel Deals Provider Quikbook.com Leaks Insider Tips for Scoring Last Minute Win …
New York, N.Y. – Quikbook.com, the online hotel discounter did an exhaustive analysis to help travelers negotiate their way through the season’s high hotel rates and locate the best last minute hotel deals. The information is now being made public in hopes of aiding savvy travelers in their last minute destination hotel search. When last minute travel is handled with knowledge of seasonal hotel price trends, some of the best

05-25-2018 | Business, Economy, Finances, B …
ReportsWeb
Boutique Hotel Market
ReportsWeb.com has announced the addition of the “Boutique Hotel Market”, Reports offering you more creative solutions that combine our deep geographic experience, intimate sector knowledge and clear insights into how to create value in your business. The report provides a basic overview of the Boutique Hotel industry including definitions, classifications, applications and industry chain structure. And development policies and plans are discussed as well as manufacturing processes and cost structures. Then, the
02-17-2017 | Tourism, Cars, Traffic
Stroblhof
Hotel in St. Leonhard
Meran hotels – The Stroblhof Active Family Spa Resort The four star Stroblhof Active Family Spa Resort is one of the best hotels in Meran. The hotel is based in the heart of Val Passiria, just 20 minutes away from the beautiful town of Meran. Meran will impress you as an idyllic alpine village. The Stroblhof is surrounded by a spectacular mountain scenery, so our guests enjoy a breathtaking view from
12-21-2011 | Tourism, Cars, Traffic
Falkensteiner Hotels & Residences
Falkensteiner Hotel & Spa Iadera in the Hotel Champions League
Vienna/Petr?ane/4th of December 2011- The five star Falkensteiner Hotel & Spa Iadera, which is situated in its own resort of Punta Skala near Zadar and opened on 1 July 2011, impressed decision-makers at The Leading Hotels of the World so much that it was accepted as a member of the world's most exclusive marketing platform for luxury hotels the first time it applied. The architecture of the house, which bears
12-10-2011 | Tourism, Cars, Traffic
Howard Johnson International Airport Hotel
Popular Phoenix Hotel - Howard Johnson International Airport Hotel
Our focus has been on customer care and we pride ourselves in the fact that we have testimonials from satisfied customers to support our claim. Our staff is courteous, friendly and ready to attend to your needs 24x7 with a very personalized service. Stay with us once and decide yourself whether our claims are authentic or not. Laced with all contemporary facilities, Howard Johnson International Airport Phoenix comes with features that
10-18-2011 | Tourism, Cars, Traffic
http://www.coorgexpress.com
Features of Coorg Hotel
Coorg is one of the hill stations that are located in the Western Ghats in small district named Karnataka. The place also known as the Scotland of India offers a lot of things for the visitors from all parts of the world. Whoever visits this place never prevents from saying that it is an untouched part of beauty and heaven on this planet Earth. Richly adorned with natural beauty, its
03-17-2011 | Business, Economy, Finances, B …
Hanoi Spark Hotel
Hanoi Welcomes New Budget Hotel “Hanoi Spark Hotel”
Roving reporter and travel writer Alejandra Simiz reports from down town Hanoi, Vietnam. On my most recent assignment I decided to take a few days off in Hanoi as it had been several years since I was last here and wanted to see what impact tourism in general had made on the Vietnamese culture. Hanoi, Vietnam, March 17, 2011 -- To my surprise, what I did find was that good budget,
Comments about openPR
9 o'clock: discuss press release with client, 10 o'clock: submit release to openPR, within the briefest possible time release is published and displayed in a prominent place on openPR.de. I am thrilled!
Zehra Spindler, Calypso Now! - Communication Agency