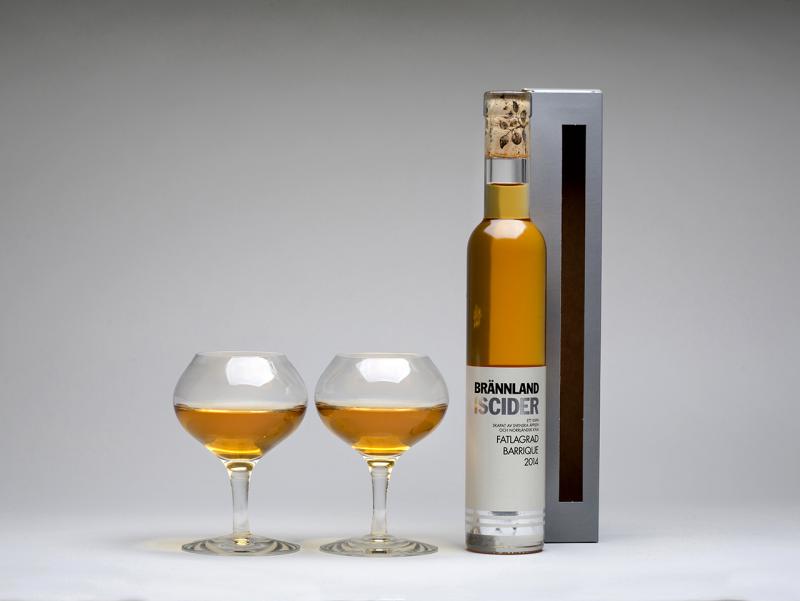 The unique L’Ortolan restaurant in Reading, the only Michelin star in the city, is hosting Brännland cidermaker and entrepreneur Andreas Sundgren Graniti. Invited guests to a unique gourmet experience like no other. A six course fine dining menu will be served at the historic tables of L’Ortolan and accompanying Brännland artisan ciders on Friday March 1st.

L’Ortolan is named after the small French song bird, once a delicacy, and now illegal to eat, a forbidden and past treat. With a long history of Michelin stars and legendary chefs, since 2015 it has fallen to Tom Clark to set the standards and maintain the coveted Michelin star.

Brännland Cider produce a range of ciders in the north of Sweden close to the university town of Umea 600 kilometers north of Stockholm. Focussed on IsCider, their production comes from 100% Swedish dessert apples and has won many international awards.

‘People thought that we were mad to try and create cider 650 kilometers north of Stockholm, but after several years of trying, in 2012 we successfully created ciders which are now prized by chefs and sommeliers across Europe and in the United States. We are delighted to be partnering with L’Ortolan to bring together two carefully crafted items – the menu and Brännland Ciders.’

Brännland Fine Ciders partner fine dining particularly well, because of the strong natural acidity from the apples. As much as this differentiates them from wines, they are produced in almost exactly the same way as wines and, once tasted, demonstrate that they deserve the same respect as fine wines.

‘L’Ortolan has a long history of food and menu innovation, creating dishes that entice and match drinks in surprising yet delicious ways. We look forward to bringing this innovative cidermakers dinner and Andreas’ fascinating story to L’Ortolan’s customers. You might say that from time to time, at L’Ortolan, we like to upset the apple cart!’

Tom Clarke’s innovative 6 course menu includes some of the finest produce including Orkney scallops, goose liver parfait, Wiltshire loin of pork from West End Farm awarded Pig Producer of the Year concluding with Chef’s pre-dessert and a sumptuous apple parfait with an eastern twist. These dishes have been carefully chosen to perfectly pair with the delicious and natural Brännland Ciders which will accompany each course include Just Cider, a drier aperitif style, the Pernilla Perle a richer, naturally, lightly sparkling style, the IsCider, the only naturally cold produced IsCider in Europe, and the exquisite, limited edition Barrique.

The full tasting menu including cider pairing is priced at £129 per person.

What is A Cider-makers Dinner?
It is an informal occasion that pairs food and ciders attended by the cidermaker. Each course, like a wine-makers dinner, is paired with a different cider. This is a special event where the guests have the insight direct from the maker of the ciders, whose responsibilities are every bit as intricate as a wine-makers. In honour of their attendance the restaurant carefully constructs a menu to pair with the accompanying range.

About L’Ortolan
L’Ortolan’s historic building has had a rich culinary history dating back to 1984 with legends such as Nico Ladenis, John Burton Race being in residence. Peter Newman came to L’Ortolan in 2001, and it has held Reading’s only Michelin star for 16 of those 17 years. Since 2015 Head Chef Tom Clarke has led the kitchen team, maintaining and developing the menu and culinary expertise bagging a clutch of industry respected awards. L’Ortolan is known for its French accent menus, impeccable restaurant management by Marco Nardi and outstanding wine selection by sommelier Lucian Obreja.

The Brännland Cider Story
Brännland Cider started in 2010 with the dream of making great cider using apples grown in the cold climate of northern Sweden. After two years of trial, error, discovery and progress, we came to the conclusion that our fruit and climate were best suited for making Ice Cider or as it’s called in its country of origin, Cidre De Glace. A few years into Brännland Ciders existence we produce several varieties of cider for the domestic and international market.

03-25-2011 | IT, New Media & Software
BOTTLE PR
Social Media and PR Consultancy BOTTLE PR Expands Team After Successful YouTube …
BOTTLE PR has appointed social media consultant Claire Dunford after a bumper year which saw the Oxfordshire-based PR agency grow by over 40%. The latest new appointment to Bottle PR, Social Media Consultant Claire Dunford, was selected as a result of BOTTLE PR’s ‘Social Media Challenge’, an initiative run via the BOTTLE PR blog and Twitter profile that invited potential consultants to pitch their skills and interest in social communications to
Comments about openPR
I can't but agree to the positive statements about your portal: easy to use, clear layout, very good search function, and quick editing!
Jens O'Brien, Borgmeier Media Communication