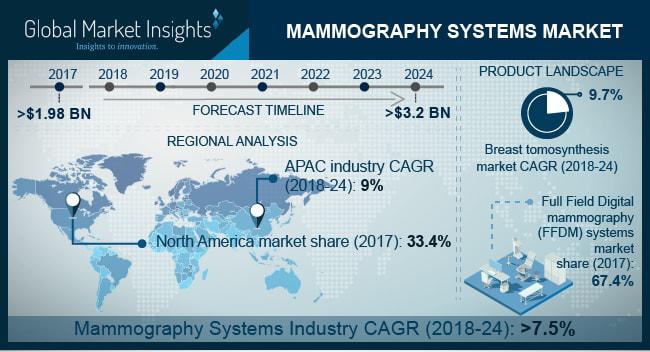 Growing awareness among the population of developed as well as urban areas of developing countries will support in impelling the mammography systems market growth. Decrease in mortality rates due to early detection will result in increased adoption of breast screening tests. Additionally, government funding to organizations across urban areas has enabled free or minimal cost breast screening tests for women within 50-69 years of age. This will lead to increased number of women seeking to mammography systems, thus resulting in a lucrative market growth of mammography systems.

Make Inquiry about this report @ https://www.gminsights.com/inquiry-before-buying/2637

Rising incidence rates of breast cancer in Indian women contributes to a significant growth rate of mammography systems market in India. Breast cancer is the most common form of cancer in India, having high patient number in urban areas. A gradual increase in awareness and improved government spending on healthcare facilities in Indian population will lead to greater acceptance and adoption of mammography systems in this region contributing to a considerable regional growth throughout the forecast period.