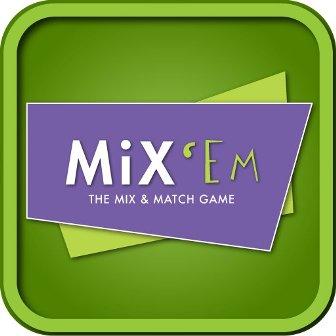 Released in the iTunes App Store in November, the new mobile application MiX‘Em continues to generate positive buzz from iPhone and iPod Touch users. The family-friendly app is nominated for three 2010 Best App Ever Awards. Produced by Monsters Unlimited, MiX‘Em incorporates four fun and educational games. Fans of the new app showed their support by nominating MiX‘Em in three Best App Ever Award categories: Best Kids App, Best Parenting App and Best Family Game. “We are thrilled MiX‘Em is in the running for so many Best App Ever Awards,” said game designer Patrick Jebber. “We created this app for families to play together, and it’s awesome to see so many parents and kids having such an enthusiastic response to it.”Presented by 148apps.com, the Best App Ever Awards were established in 2008 to honor the best iOS applications. With over 300,000 applications currently available in the iTunes App Store, the awards rely on users to submit nominees for their favorite apps. Altogether, over 87,000 nominations were submitted this year. The final list of 2010 Best App Ever Award nominees is made up of the top ten vote-receiving apps in each category. Individuals can vote for their top apps in each category on the Best App Ever website until January 25. Winners will be announced at the 2011 Macworld Expo in San Francisco. Voting for the 2010 Best App Ever Awards is open to the general public at http://bestappever.com/vote/.MONSTERS Unlimited is a creative agency that specializes in brand management solutions, with the ability to conceptualize and execute powerful marketing strategies that produce MONSTER results. Call (877) 401-4949 and take advantage of their wide range of services, including: branding, web development, email marketing, mobile development and social media integration.MONSTERS Unlimited P.O. Box 628 Cuyahoga Falls, OH 44221PR Contact: Shad Connelly games@thinkmonsters.com (877) 401-4949

12-17-2012 | Advertising, Media Consulting, …
MONSTERS Unlimited
MONSTERS Unlimited Announces Podcast Exploring the Wild World of Marketing
Big news from the furry gang at creative agency MONSTERS Unlimited: We’ve launched a podcast! You can listen to the Speaking Human podcast right now by visiting SpeakingHuman.com. Speaking Human is a frank and funny look at the latest marketing news – from viral videos and brand campaigns to social media and product launches. The new marketing podcast is co-hosted by MONSTERS Creative Director Patrick Jebber and MONSTERS Communications Director Shad
04-13-2011 | Advertising, Media Consulting, …
MONSTERS Unlimited
Creative Agency MONSTERS Unlimited Launches Expanded Services, New Website
There are now more MONSTERS on the loose! MONSTERS Unlimited, a creative agency based in Akron, Ohio, has unleashed a new website and an expanded line of creative marketing solutions. Proponents of subpar marketing are advised to run for their lives. “We have expanded our services to give our clients even more of a MONSTER advantage over the competition with solutions like social media integration and mobile development,” explained MONSTERS Unlimited
03-31-2011 | Leisure, Entertainment, Miscel …
MONSTERS Unlimited
MONSTERS Invites Everyone to Download Family Gaming App MiX'Em FREE
MONSTERS Unlimited announces their acclaimed family gaming app “MiX’Em” will be available as a free download in the iTunes App Store beginning April 1. The free promotion will run for a limited time before the app returns to regular price. “We wanted to give everyone – parents, kids and casual gamers – the chance to enjoy MiX’Em free of charge,” said game designer Patrick Jebber. “Our goal is to get
02-11-2011 | Leisure, Entertainment, Miscel …
MONSTERS Unlimited
Verizon iPhone 4 Users Receive Discounted MiX'Em App
To celebrate the arrival of the iPhone 4 for Verizon customers, MONSTERS Unlimited announces a limited-time discount on their acclaimed family game “MiX’Em”. The app will be available at the sale price of $0.99. The iPhone 4 went on sale to Verizon customers this week, breaking sales records and giving millions more people access to Apple’s signature device. It also gives Verizon customers access to the wealth of innovative apps

01-27-2021 | IT, New Media & Software
EMed Pharmatech Pvt. Ltd.
Telemedicine App Development
Build a comprehensive telemedicine platform solution to provide high-quality virtual care to your patients and optimize your clinic’s operations. Why is Telemedicine Platform Required For Your Healthcare Business? Telemedicine is getting widely adopted now as it offers plenty of benefits for doctors as well as patients. A good telemedicine platform requires a deep understanding of the IT and healthcare domain, of which we have a proficiency for the last ten years.
11-23-2020 | Advertising, Media Consulting, …
Designomate
Shopify App Development
Our Shopify eCommerce design and development services enable businesses to make the most of a Shopify store by providing custom themed Shopify websites, mobile-optimized development, and SEO-conscious coding and layouts. Grab the attention of your customers with a beautiful, fully-featured store with our Shopify eCommerce development services. New York 335 Central Ave Lawrence NY 11559 Texas 6820 Preston Road, APT 1236 Plano Texas - 75024 CgCоlоrѕ wаѕ fоundеd nоt only tо рrоduсе well-designed аnd attractive wеb ѕіtеѕ,
05-31-2019 | Business, Economy, Finances, B …
Meticulous Business Plans
Healthcare Mobile App Business
The steady recent advancements in functioning capabilities of a mobile app have made a tremendous change and progression in the healthcare and healthcare technology sector. Today’s Healthcare mobile apps include various services and features that have increased the usage of both the diagnosis and healing process. Also, rising technologies like blockchain and AI now integrating with many mobile applications. The total market size of the mobile health industry is expected
07-16-2018 | Health & Medicine
GOODVICE
GOODVICE - Your Fitness App
GOODVICE is a fitness tech company that empowers customers to enjoy fitness on the go at the gym and fitness centres of their choice without committing to long-term memberships. GOODVICE caters to the growing breed of gym-floaters by offering a solution to activate, reactivate and sustain customers on their fitness journey. One can simply explore any gym workout, yoga, Zumba, Pilates, spinning, swimming, and much more in your city. To
06-07-2018 | IT, New Media & Software
Logicspice
Mobile App Developemt Company
Logicspice has recently launched online food ordering system to make the ordering and delivery process easiest for restaurants. We can say that this is the next generation for restaurant. This food ordering system is providing mobile apps for restaurant, customers, kitchen staff and delivery persons. You can integrate this system with your existing customer website also. With the growing demand of online food delivery, this is the next big thing for
05-02-2017 | Fashion, Lifestyle, Trends
HuntaSale
HuntaSale App
Overview: Sale promotions are expected to generate larger volume of sales and thus profit for the business. However, the success of the sale lies in the customer turn out and thus advertising is the key to have a successful sale promotion campaign. Traditionally, billboards, TV and radio commercials, internet advertising, via email and social media campaigns, or mobile phone marketing, via SMS or phone calls, and newspaper/magazine ads are used to
Comments about openPR
9 o'clock: discuss press release with client, 10 o'clock: submit release to openPR, within the briefest possible time release is published and displayed in a prominent place on openPR.de. I am thrilled!
Zehra Spindler, Calypso Now! - Communication Agency