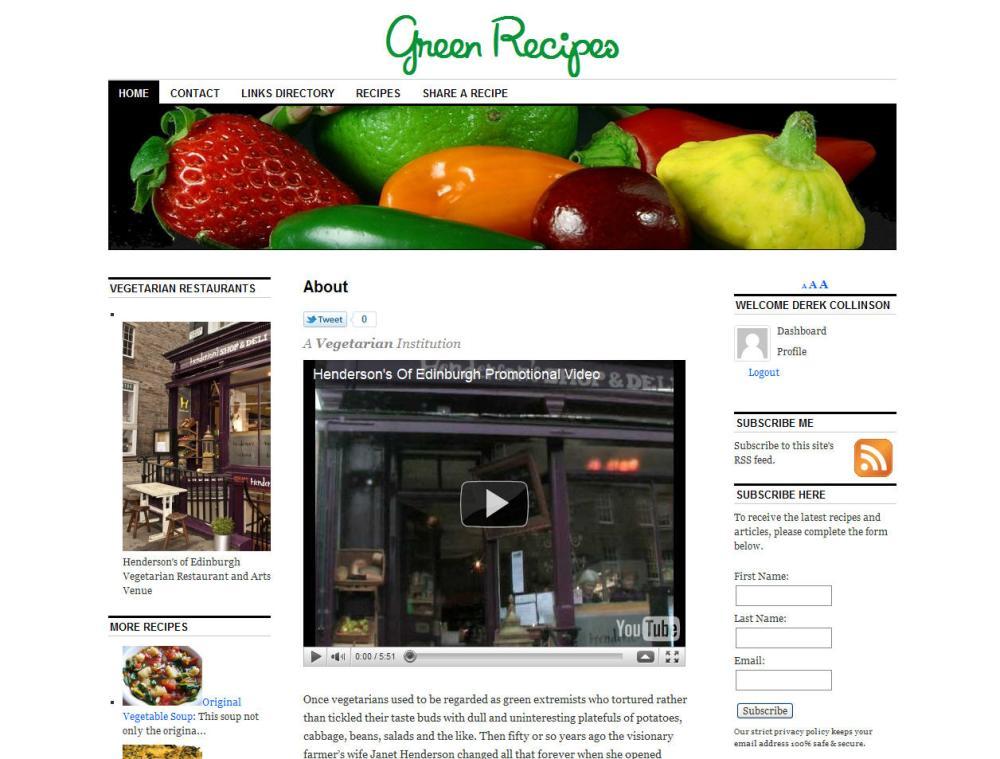 Recipes from the first vegetarian restaurant in Scotland - Henderson’s of Edinburgh are the focus of Derek Collinson’s new vegetarian recipe blog - www.greenrecipes.biz launched today. Janet Henderson was the inspiration behind Henderson’s almost fifty years ago when she persuaded her husband, ex rugby internationalist James “Mac’ Henderson, to turn his farm into an organic dairy farm. Soon afterwards Henderson’s Salad table as it was known then was born. Henderson’s is well known to vegetarians from all over the world who visit Edinburgh every year for events such as the Edinburgh Military Tattoo and The Edinburgh Festival. Indeed the restaurant is so popular that a queue often forms outside in Hanover Street - such is the popularity of the vegetarian and vegan fare offered. I was born in Edinburgh and spent a few years enjoying the various eateries there of which there are many but my lasting memory is of the superb vegetarian dishes I enjoyed at Henderson’s - particularly their glorious cherry pie with whipped cream! Of course to this day the founder’s philosophy ‘serving only wholesome natural food in a burgeoning variety of attractive forms and always at reasonable prices” is religiously followed and has in no small way lead to the restaurant’s present standing as one of the most highly regarded in the world! When I lived in Edinburgh many of my non vegetarian friends ate there and I daresay the quality and variety of dishes and the convivial atmosphere lead to many embracing vegetarianism. I was delighted when Henderson’s kindly gave me permission to feature their recipes in www.greenrecipes.biz. They are taken from their two recipe books - “Henderson’s Wholefood Cookbook” and “Henderson’s Book of Salads.” Visitors to the website can choose any recipe they like, print if off then comment on their end result and rate it. Whilst in Edinburgh they can also compare their result with the same dish served in Henderson’s Restaurant! Visitors to www.greenrecipes.biz are invited to register (this is free and takes a few seconds) and share a recipe that they particularly like with fellow vegetarians and have it rated and commented on.Vegetarian and vegan recipes featuring the best recipes from Henderson's of Edinburgh and food and cooking tipsGreen Recipes Derek Collinson 6 Top Row, Sledmere DRIFFIELD, East Riding of Yorkshire Y025 3XL United Kingdom Phone: 0113 815 2092 editor@greenrecipes.biz http://ww.greenrecipes.biz

News-ID: 157345 • Views: 1499
Comments about openPR
OpenPR ist the nicest and most clearly laid out PR platform I have seen to this day. The press releases are displayed very nicely and clearly and without any unnecessary frills. The updates are fast and the finished release looks appealing and is clearly legible. Even with 16 years of experience one discovers new things from time to time. Congratulations!
Gabriele Ketterl, Director Marketing & PR, Menads