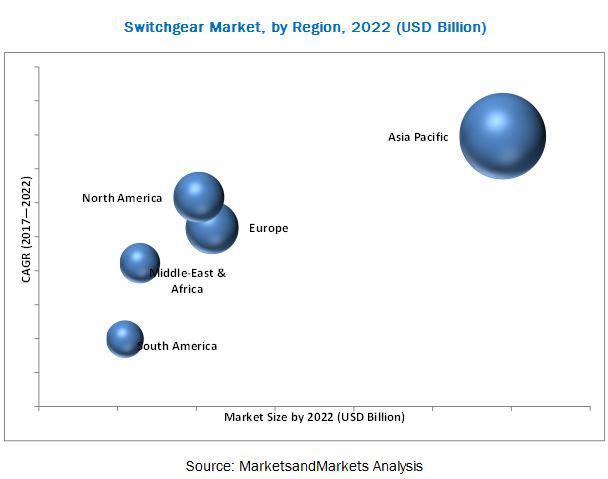 According to recent research "Switchgear Market by Voltage (< 1 KV, 1–36 KV, 36–72.5 KV, > 72.5 KV), End-User (Transmission & Distribution Utilities and Manufacturing & Process Industries), Equipment (Gas Insulated, Air Insulated, and Circuit Breakers) - Global Forecast to 2022", the global switchgear market is expected to grow from an estimated USD 88.71 Billion in 2017 to USD 125.10 Billion by 2022, at a CAGR of 7.12%, from 2017 to 2022. The market in Asia Pacific was the largest in 2016 and is projected to hold the largest share by 2022, followed by the markets in Europe and North America. The growth of the switchgear market is driven by increasing access to electricity in developing countries, increase in the number of renewable power generation projects, and growth of the construction and developmental activities.Browse 68 Market Data Tables and 51 Figures spread through 144 Pages and in-depth TOC on"Switchgear Market" https://www.marketsandmarkets.com/Market-Reports/switchgear-market-1162268.html The gas insulated switchgear is expected to hold the largest share of the switchgear market, by equipment, during the forecast period.The gas insulated switchgear sub-segment of the equipment segment led the switchgear market in 2016 and is projected to dominate the market during the forecast period. Rising energy demand and extension/replacement of old switchgear at sub-stations can drive the gas insulated switchgear equipment in the switchgear market. However, the circuit breaker sub-segment accounted for the second largest share in 2016 in the switchgear market, based on the equipment segment.The transmission and distribution utilities segment is expected to hold the largest share of the switchgear market, by end-user, during the forecast period.The transmission and distribution utilities sub-segment of the end-user segment led the switchgear market in 2016 and is projected to dominate the market during the forecast period. The transmission and distribution utilities segment is also expected to grow at the fastest rate during the forecast period.The growth of the transmission and distribution utilities segment is primarily driven by increasing investments in sub-station automation, modernization of electric grid, and smart utilities which includes smart grids and smart meters. This would enhance the protection by decreasing energy losses, due to poor operational efficiency of traditional equipment. This would ultimately create new revenue pockets for the switchgear market during the forecast period.Speak To Analyst @ https://www.marketsandmarkets.com/speaktoanalystNew.asp?id=1162268 North America: The leading market for switchgearIn this report, the switchgear market has been analyzed with respect to five regions, namely, Asia Pacific, Europe, North America, the Middle-East and Africa, and South America. The market in Asia Pacific led the global switchgear market in 2016. Increasing grid investments especially in developing economies, such as China and India and plans for electrification in remote areas in countries, such as Vietnam, Indonesia, and the Philippines are expected to drive the switchgear market in Asia Pacific. Indonesia aims to achieve 90% electrification rate by 2025 and the countries, such as the Philippines and Malaysia have similar plans. Rise in investments in smart grid technologies including distribution grid automation, smart meters, and demand response systems in countries, such as Japan, South Korea, and Australia would create opportunities for the switchgear market in the Asia Pacific region.The switchgear market is dominated by a few global players. The key players in this market include ABB Ltd. (Switzerland), Siemens AG (Germany), General Electric Company (US), EATON CORPORATION plc (Ireland), and Schneider Electric SE (France).Major strategies adopted by the players in the switchgear market over the period 2013–2017(July) included contracts & agreements, new product launches, expansions, and partnerships, of which contracts & agreements was the most adopted. The second most preferred growth strategy was new product launches which included India’s first 765 kV gas insulated substation by Larsen & Toubro Limited (India).Request for special pricing on bundle reports @ https://www.marketsandmarkets.com/RequestBundleReport.asp?id=1162268About MarketsandMarkets™: MarketsandMarkets™ provides quantified B2B research on 30,000 high growth niche opportunities/threats which will impact 70% to 80% of worldwide companies’ revenues. Currently servicing 7500 customers worldwide including 80% of global Fortune 1000 companies as clients. Almost 75,000 top officers across eight industries worldwide approach MarketsandMarkets™ for their painpoints around revenues decisions.Our 850 fulltime analyst and SMEs at MarketsandMarkets™ are tracking global high growth markets following the "Growth Engagement Model – GEM". The GEM aims at proactive collaboration with the clients to identify new opportunities, identify most important customers, write "Attack, avoid and defend" strategies, identify sources of incremental revenues for both the company and its competitors. MarketsandMarkets™ now coming up with 1,500 MicroQuadrants (Positioning top players across leaders, emerging companies, innovators, strategic players) annually in high growth emerging segments. MarketsandMarkets™ is determined to benefit more than 10,000 companies this year for their revenue planning and help them take their innovations/disruptions early to the market by providing them research ahead of the curve.MarketsandMarkets’s flagship competitive intelligence and market research platform, "Knowledgestore" connects over 200,000 markets and entire value chains for deeper understanding of the unmet insights along with market sizing and forecasts of niche marketsContact: Mr. Shelly Singh MarketsandMarkets™ INC. 630 Dundee Road Suite 430 Northbrook, IL 60062 USA : 1-888-600-6441 newsletter@marketsandmarkets.com

03-06-2019 | Energy & Environment
Planet Market Reports
Switchgear
Planet Market Reports has added a report, titled, “Global Switchgear Outlook, For Outdoor Power Market Forecast to 2023.” Planet Market Reports projects that the Switchgear market size will grow from USD 88.49 Billion in 2017 to USD 134.14 Billion by 2023, at an estimated CAGR of 7.18%. The base year considered for the study is 2017, and the market size is projected from 2018 to 2023. Get More Information about this Report
09-20-2018 | Advertising, Media Consulting, …
6Wresearch- Market Intelligence Solutions
Indonesia Switchgear Market (2017-2023)-6Wresearch
Market Forecast By Voltage (Low Voltage (< 1kV), Medium Voltage (1 kV – 24 kV) and High Voltage (> 24 kV)), By Insulation (Medium Voltage (AIS, GIS and Others), High Voltage (AIS, GIS and Others)), By Types (Low Voltage (MCB, MCCB, C&R, ACB, COS and Others), Medium Voltage (ISG, OSG and Others)), By Verticals (Residential, Commercial, Industrial, Power Utilities and Infrastructure & Transportation), By Regions (Java, Sumatra, Kalimantan, Sulawesi, Papua
07-20-2018 | Business, Economy, Finances, B …
Transparency Market Research
Medium Voltage Switchgear Market
Attributable to the nearness of worldwide and provincial merchants, this market is divided. They sellers in the market are contending based particle the cost, item offering and dispatch of new item in the market. The expansive firms in the market are having significant offer because of variables, for example, item plan, quality, turnaround time, administrations offered, highlights of the item, and upkeep of client connections. Major organizations in the worldwide
06-04-2018 | Advertising, Media Consulting, …
6Wresearch- Market Intelligence Solutions
Myanmar Switchgear Market (2018-2024)-6Wresearch
Increasing Access to Electrification along with Strengthening Power Sector Would Drive the Myanmar Switchgear Market – 6Wresearch Construction of new housing units, development of several large-scale transportation infrastructure projects as well as strengthening of the power infrastructure in the country are some of the top objectives of the NLD government in Myanmar over the coming years. Initiatives such as the Myanmar National Electrification Plan have been adopted with an aim to
02-23-2018 | Energy & Environment
Global Market Insights, Inc.
Switchgear Market worth over $160bn by 2024
Increasing investment towards infrastructure development subject to rapid commercialization and residential establishments across developing regions will foster the switchgear market size. Refurbishment of aging electrical networks along with growing demand for advanced monitoring and control distribution systems will further embellish the business outlook. In 2017, the Government of Serbia entered into a strategic partnership with the Government of China towards modernization of their existing infrastructure. China switchgear market size is set
01-25-2017 | Advertising, Media Consulting, …
6Wresearch- Market Intelligence Solutions
India Switchgear Market (2017-2022)-6Wresearch
Rising Investments in Power Infrastructure, Government Initiatives and Developing Commercial and Industrial Sectors would boost the Demand for Switchgears in India – 6Wresearch With government’s focus to provide adequate power infrastructure to its citizen, power sector is expected to reflect strong growth in future. Schemes like UDAY, IPDS, DDUGJY and Power for All are the prime pillars which are expected to spur the overall power sector. According to Ministry of Power,
Comments about openPR
9 o'clock: discuss press release with client, 10 o'clock: submit release to openPR, within the briefest possible time release is published and displayed in a prominent place on openPR.de. I am thrilled!
Zehra Spindler, Calypso Now! - Communication Agency