“A Destiny in the Making: From Wall Street to Unicef in Africa” by Boudewijn Mohr is published


Press release from: PR for ADM 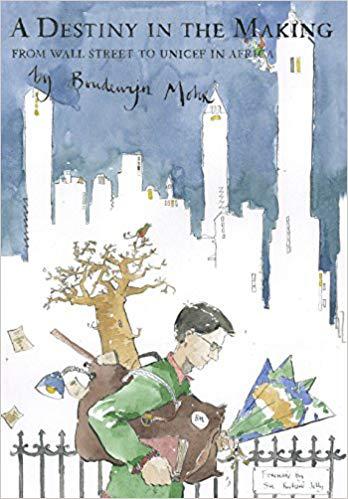 ISBN # 978-1786231482“A Destiny in the Making: From Wall Street to Unicef in Africa” by Boudewijn Mohr is publishedA must-read for business people interested in a humanitarian challenge, newcomers to the United Nations and all others who care about AfricaAbout the Book:When a Wall Street banker takes the side of developing countries in feature articles reviewing the impact of the global sovereign debt crisis of the 1980s, it is time to leave banking. He is attracted to Unicef’s vision and goal of Health for All and its tireless pursuit of structural economic adjustment with a human face. In Africa, Boudewijn Mohr jumps into Unicef’s hands-on work in health, education, water and sanitation and child protection projects. He spearheads the clearing of landmines in Mozambique, and engages with African youth throughout his travels on the continent. He plays football with former child soldiers in Monrovia; tours Nouakchott with street children, witnesses first-hand a diamond mine that exploits child labour near Kenema in the rebel-infested east of Sierra Leone. His stories are both an adventure and the search of fulfilment but at the same time a call to all those who want to do more and are uncertain of what the world holds. About the Author:Prior to joining Unicef in 1985, Boudewijn Mohr was a senior international corporate banker in New York with Chase Manhattan Bank and later Société Générale's branch. Joining Unicef in Geneva, his initial brief was to support the National Committees of Unicef in Europe to diversify their sources of income, more specifically through designing strategies for building partnerships and raising funds with European companies. He subsequently worked for over 25 years with Unicef in Africa, which took him to 36 countries on the continent. Boudewijn Mohr has written extensively for Unicef on the state of children and women in Africa. A national of the Netherlands, he holds a Master’s degree in Law from Leiden University and an MBA from the European Business School INSEAD in Fontainebleau, France.Part of the proceeds from this book are going to the 'Hands-Up Foundation', a British charity working with Syrian doctors and nurses in northern Syria under harsh circumstances.Amazon Reviews:Richard Barber 5.0 out of 5 stars It throws a fascinating light on the workings of a great international organisation“This is an inspiring story of how a promising international career in banking turned into disillusionment, triggering a high-risk switch into a new career within Unicef and a life of compassion, adventure and leadership in Africa. It throws a fascinating light on the workings of a great international organisation, tells of the adaptability of the author and his family to new environments and is a tribute to his and his family’s deeply-felt humanity in their devoted work among some of the poorest peoples of the world.”M. Vianello-Chiodo 5.0 out of 5 stars I like it: freshI like it: fresh, sincere, well-written. Not only interesting, but entertaining and amusing. The story on demining is very moving.Ruth Ansah Ayisi 5.0 out of 5 stars Five StarsAn inspirational and enjoyable read, particularly for anyone working or thinking of working in the humanitarian sector.“A Destiny in the Making: From Wall Street to Unicef in Africa” by Boudewijn Mohr is available in hardback from Amazon at:https://www.amazon.co.uk/Destiny-Making-Street-Unicef-Africa/dp/1786231492and in paperback at:https://www.amazon.co.uk/Destiny-Making-Street-Unicef-Africa/dp/1786231484 This remarkable real-life story is also available in e-book format from:https://www.amazon.co.uk/Destiny-Making-Street-Unicef-Africa-ebook/dp/B07C81F3GW Press/Media Contact Details:Grosvenor House Publishing Tel. 0208 339 6060 e-mail: info@grosvenorhousepublishing.co.ukGrosvenor House Publishing is a professional publishing house in the UK.Grosvenor House Publishing Limited Link House 140 The Broadway Tolworth Surrey, England KT6 7HT

You can edit or delete your press release “A Destiny in the Making: From Wall Street to Unicef in Africa” by Boudewijn Mohr is published here

10-30-2017 | Advertising, Media Consulting, …
CECED, Ambedkar University Delhi.
CECED & UNICEF releases IECI study report
UNICEF with CECED, Ambedkar University Delhi and ASER Centre launches India Early Childhood Education Impact Study Report Delhi: UNICEF, in partnership with Centre for Early Childhood Education and Development (CECED), Ambedkar University Delhi and Annual Status of Education Report (ASER) Centre today launched a report on the Indian Early Childhood Education Impact study, a five-year longitudinal research study that followed a cohort of 14,000 four year olds from age 4 to
12-14-2016 | Leisure, Entertainment, Miscel …
FridayMoviez
Priyanka Chopra Is The Global Goodwill Ambassador For UNICEF
Even small kids in the overseas now must be familiar with the name Priyanka Chopra. Our desi beauty is slaying it in the USA by her stellar performance in American TV series 'Quantico season 2.' The actress will also mark her Hollywood debut with the film 'Baywatch' alongside Dwayne Johnson and many others. Now she has set a new milestone by becoming the Global Goodwill Ambassador of UNICEF. Priyanka recently shared
08-01-2014 | Leisure, Entertainment, Miscel …
Quilt around the World GmbH
Where do you come from? - Invitation to a new worldwide patchwork project in aid …
Munich, August 1, 2014: The theme of the new international community project organized by the online magazine „Quilt around the World” is “Where do you come from? – Stories as blocks. Blocks and their (hi)story. From every era and every region, a wealth of cultures and traditions has originated with an endless variety of patterns, ornaments, symbols and graphic structures which can also be (re-)discovered as patchwork and quilting
09-11-2012 | Business, Economy, Finances, B …
UAE Exchange
UAE Exchange donates $100,000 to UNICEF, this Ramadan for the cause of underpriv …
UAE Exchange contributes $ 100,000 to UNICEF during the holy month of Ramadan, in a campaign, which involved its operations in the UAE, Oman, Kuwait, Qatar and Bahrain. The campaign for underprivileged children by UAE Exchange and The United Nations Children's Fund - UNICEF, during the holy month of Ramadan, came to an end with the global money transfer donating USD 100,000 for the cause. This is the second time that
08-08-2011 | Business, Economy, Finances, B …
UAE Exchange
UAE Exchange ties-up with UNICEF for the cause of the children
UAE Exchange and UNICEF announced a new partnership to promote the cause of underprivileged children. In this partnership, the leading global remittance and foreign exchange brand will donate to UNICEF AED 0.10 for each remittance transaction done through UAE Exchange branches in the United Arab Emirates during the holy month of Ramadan. “A child’s smile is priceless and this Ramadan, customers of UAE Exchange have the opportunity to bring more smiles
06-02-2011 | IT, New Media & Software
Smartlogic
'Leveraging Ontology': Unicef Take Smartlogic's Semaphore to DAM 2011, June 8-9 …
Smartlogic's Semaphore for Digital Asset Management. Jessica Peterson from Unicef presents at DAM NY 2011 on June 9th. Smartlogic's Semaphore software is the semantic software referenced in the discussion on Metadata, Taxonomy & Search at the Digital Asset Management (DAM) Conference in New York, June 8-9, 2011, where UNICEF's Jessica Peterson is presenting a talk on 'Leveraging Ontology for a Fully Integrated DAM Infrastructure.' Jess Peterson is the taxonomy specialist for the
Comments about openPR
Your portal is fast, simple, and easy to use. Others may have more functions but they also demand more editing time, you have to preformat the text in order to achieve a good result etc. I think openPR is really fantastic!
Andreas Knepper, wallmedien AG