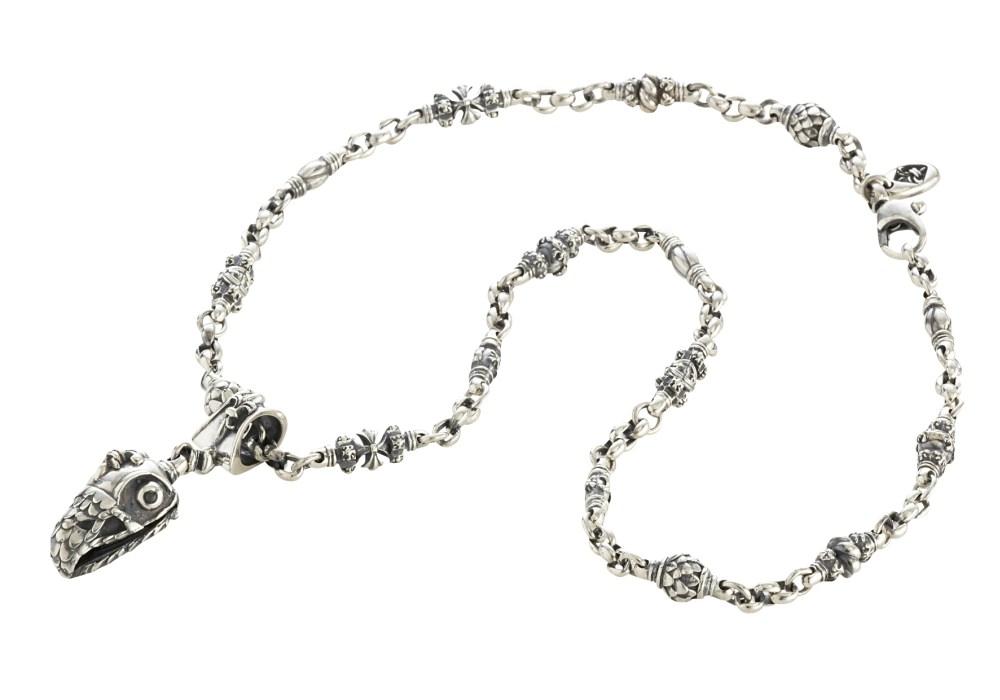 In the upcoming season, ElfCraft, the Hamburg-based cult label for striking solid silver jewelry, focuses on supernaturally beautiful “Fetish chains.” The long silver chains with delicate elements from the world of mythical creatures and elves are unconventional pieces of unisex jewelry, which all bear the symbol of the lily. With their silver pendants in the form of the royal lily, eagle’s head, star and cross, they embody the essence of the uncompromising jewelry label: dominance, pride, sensuality and magic. With his latest pieces, Wolfgang A. Elfers - the creative mind and founder of ElfCraft – has created sparkling eye catchers for neck and décolleté. Together, the chain links in the form of crown, cross, lily and Maltese cross make an enchanting ensemble of magical elements. Like a talisman, they promise their wearer luck, power, and protection from impending doom. The so-called “Talismans of Power” – finely woven leather necklaces with a large silver ring, each of which has a pendant in form of a cross or lily attached to it, typical of ElfCraft, also act as lucky charms. Overall, ElfCraft is expanding its expertise in the segment of leather accessories for the next season. Laptop bags made from black nappa leather, robust belts with silver clasps, wallets with stingray leather inserts, and fancy dog collars complement the exclusive product range. In the creation of his supernatural jewelry collection, Wolfgang A. Elfers was inspired by his personal vision of a “Garden of Night.” The mysterious night garden, which contains elements one can sense but not see, served the unconventional designer as a model for his wearable wonder worlds, which move in the balance between dream and reality. Since 1996 Elfers has been creating his sought-after pieces of sterling silver, and with his unconventional designs has long established himself in the international fashion scene. ElfCraft is a label with magical attraction for musicians, actors and athletes as well. Many celebrities wear the commanding jewelry with great enthusiasm. Elfers is very pleased about the glamorous following. “ElfCraft is pure Rock´n´Roll and embodies an individualistic style between formative understatement and nonconformist intransigence,” says the Hamburg designer.ElfCraft was founded in Hamburg in 1996. Stars like David and Victoria Beckham, Dieter Bohlen, Depeche Mode, Herbert Grönemeyer, Philip Kirkorov, Ralf Möller, Michael and Cora Schumacher, Tokio Hotel, Kim Wilde, the Scorpions and Zinedine Zidane wear ElfCraft. ElfCraft products are available from exclusive suppliers in Europe, the Arab world, Asia, Australia, North America and South America.Am Rathenaupark 11 22763 Hamburg Germany Phone: +49 (0) 40 1888-4373 Mobil: +49 (0) 163 3709097 Mail to: lena@froschkoenig-pr.de

You can edit or delete your press release Magic meets fetish: ElfCraft presents the 2011 Collection here

News-ID: 154946 • Views: 1675
Comments about openPR
We publish our press releases on openPR.de because we like people who are "open" - just like us.
Frank Obels, CEO, INCONET - Informationssysteme, Communication und Netzwerkberatung GmbH