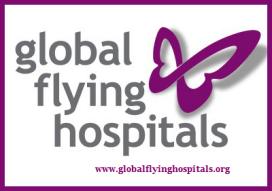 Due to confusion with the names of the two entities, 'Global Flying Hospitals' and 'The Flying Hospital', Global Flying Hospitals is now shedding light to demonstrate that no relationship, connection or cross purpose exists. Global Flying Hospitals (GFH) is a charity organization with its US Region Head Office in Palm Beach Florida, and its Asia Region Head Office in Macau SAR, China. It has a highly focused and globally wide vision of assisting developing countries to become self-sufficient and sustainable with healthcare for their citizens who lack or cannot afford medical care. This vision encompasses the building of a fleet or aircraft comprising four Boeing 747's, refurbished as Teaching Hospitals and each designed for a group of differing medical specialisms, four Hercules C130's ferrying high-tech field medical clinics, medical equipment, emergency modular housing, sanitation, water purification and solar power equipment. Under-girding this 'fleet' is the provision of four Pilatus PC12 single engine turbine craft, for micro-insertion of medical professionals, patient evacuation and rendezvous of supplies or patients with the Boeing's and Hercules. A special MediVac helicopter division is under plans. Global Flying Hospitals is creating a new world paradigm, being a comprehensive new model for humanitarian healthcare, that totally supersedes the old band-aid methods and thinking of the past, caused by a lack of resources and dis-interest by the world towards developing countries. GFH is also a vital player for the achievement of the United Nations 2015 Millennium Goals. Since 9/11, the world has undergone a huge transformation of historic proportions, such as Geo-economic shifts, the rise of China, the financial crisis, the mounting debt of nations, destruction of the ecology, pollution concerns, global warming and repetitious natural disasters. Global Flying Hospitals is the solution to the humanitarian medical challenges of this now uncertain and ailing world. The Flying Hospital The Flying Hospital is a 36 six year old aircraft; a refurbished 1974 Lockheed 1011, that is the product of the organization, “Operation Blessing International”, founded by Pat Robertson, of the 700 Club fame. A company was formed, The Flying Hospital Inc. to operate and manage the aircraft, receive donations and supports etc. It was designed pre 9/11 and was simply meant for launching various medical missions, for one and two week time-slots. Admirable work was conducted and thousands of medical procedures were undertaken, during its initial tour to a number of countries. Grounded since 2001 The aircraft was grounded in 2001 and mothballed in the desert, in Tuscon, where it has sat for these many years and is now nearing obsolescence. Although it is possible to resurrect the aircraft, it is old and not many Lockheed's fly, thereby making parts procurement very difficult and costly. Mr. Bill Horan, President of Operation Blessing states: “I don't see it as impossible that this plane might fly again, but it is very unlikely for a variety of reasons. That being said, we continue to try and find a good home for this plane." Global Flying Hospitals commends the efforts of The Flying Hospital, as it served humanity well. However, there is no relationship, connections or cross purposes in either organization. Only one other such organization exists, that being the excellent charity Orbis, the flying eye hospital and its DC10. Any other such group purporting to be using The Flying Hospital Inc, its website, the actual Lockheed aircraft and even endeavoring to fund-raise by accepting charitable donation; is at this date, a fabrication and illegal. Some facts and statements in the Press Release were gleaned from the Arizona Daily Star online newspaper. info@gobalflyinghospitals.org www.globalflyinghospitals.org*** end ***Global Flying Hospitals (GFH) is a humanitarian charity organization with a highly focused and globally wide vision of assisting developing countries to become self-sufficient and sustainable with healthcare for their citizens who lack or cannot afford medical care.Global Flying Hospitals 4400 PGA Blvd. Suite 600 Palm Beach Gardens, Florida 33410 USA info@globalflyinghospitals.org

01-22-2019 | Health & Medicine
Allied Market Research
Hospital-based EMR Market
Electronic medical record (EMR) is a digital version of a paper chart, which contains a patient's medical history. This system is designed to share information with other healthcare providers such as laboratories and specialists. It helps to reduce operational cost such as transcription services and overtime labor expenses. Get Sample PDF of Report@ https://www.alliedmarketresearch.com/request-toc-and-sample/3219 Increase in demand for advanced health monitoring systems drives the growth of the market. In addition, rise in
11-15-2018 | Health & Medicine
Grand Research Store
Hospital Logistics Robots Market 2018
Hospital logistics robots comprise autonomous guided vehicles (AGVs) and mobile robot platforms. These are used for managing the flow of goods such as laboratory samples, food, pharmaceuticals, environmental waste, and laundry inside hospital premises. Download FREE Sample of this Report @ https://www.grandresearchstore.com/report-sample/global-hospital-logistics-robots-2018-2023-863 This report focuses on the Hospital Logistics Robots in global market, especially in North America, Europe and Asia-Pacific, South America, Middle East and Africa. This report categorizes the market based
11-12-2018 | Health & Medicine
Research Reports Inc
Hospital Privacy Screens
Business NEWS 2018 : Hospital Privacy screens are designed to provide privacy and protection and create more pleasant environment for patients in private clinics, hospitals, nursing homes, and specialty care centers. It is one of the best alternatives to the curtains, which is the source of infection that cannot be cleaned regularly, as its hard surface can be wiped and disinfected regularly, thus eliminating the need to remove, launder, and
01-11-2018 | Business, Economy, Finances, B …
WISE GUY RESEARCH CONSULTANTS PVT LTD
Lotus Eye Care Hospital
Lotus Eye Care Hospital Lotus Eye Care Hospital- Company Profile & Financial Analysis” contains in depth information and data about the company and its operations. You will find information on the business structure, areas of operation, products and services offered by the company. It also comprises SWOT analysis, key ratios, historical financial data and insider’s view on financial stability and industrial ranking with financial forecasts for two- year period. This report is
11-07-2017 | Industry, Real Estate & Constr …
MEHITS
Neuromed hospital grows
Mitsubishi Electric Hydronics & IT Cooling Systems, with its brand Climaveneta, provided air conditioning units to the new clinic belonging to Neuromed Institute in Italy, after having successfully supplied other units to the same hospital in the past years. Five years after laying the first stone, the new clinic of the Neurology Institute was inaugurated on October 27th. The Hospital boasts a high degree of specialization in Neurosurgery, Neurology, and all
07-15-2016 | Health & Medicine
Climaveneta
The Hospital undergoing surgery
Gustavo Frickle Hospital is a new 92,000 sqm building in Viña del mar, Chile. This modern 11-storey structure with 554 rooms, clinical wards and an heliport, will be inaugurated in March 2017. Providing patients and medical personnel with ideal temperature and humidity conditions as well as huge amount of sanitary hot water, achieving these with reduced acoustic emissions and highest efficiency, are the key challenges for the HVAC system of the
Comments about openPR
OpenPR ist the nicest and most clearly laid out PR platform I have seen to this day. The press releases are displayed very nicely and clearly and without any unnecessary frills. The updates are fast and the finished release looks appealing and is clearly legible. Even with 16 years of experience one discovers new things from time to time. Congratulations!
Gabriele Ketterl, Director Marketing & PR, Menads