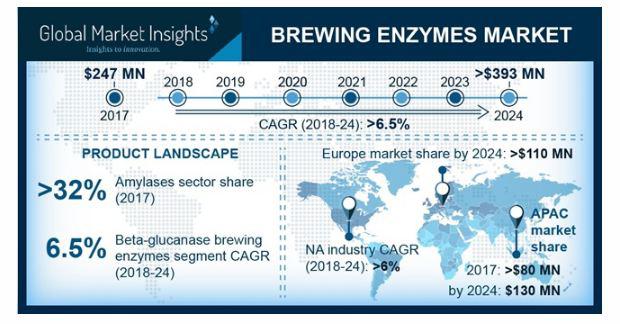 Brewing enzymes market has lately been on an explosive growth path with the rising popularity of beer consumption. While the drinking of beer has held a strong place in the culture of various European and North American nations, the rising levels of disposable incomes in emerging nations and the growth of trade between more established economies has also made a significant contribution to the expansion of the beer industry that has in turn aided brewing enzymes market expansion.Request Sample Copy of this Report @ https://www.gminsights.com/request-sample/detail/2009Company Profiles1. Novozymes 2. DSM 3. AB Enzymes 4. Amano 5. Danisco Foods B.V. 6. DENYKEM LIMITED 7. Lyven 8. Dyadic International, Inc. 9. Z.A. Biotech 10. Megazyme 11. Jiangsu Boli Bioproducts Co., Ltd. 12. Hobio Bioengineering 13. Specialty Enzymes 14. Customized Brewing Solutions 15. Aumgene Biosciences Pvt LtdThe consumption of beer has almost always outweighed the consumption of any other kind of alcohol by a wide margin, a factor that has been positively reflected on the brewing enzymes market as demand for brewing enzymes has not only increased with the increase of beer consumption but has also evolved as the need for faster demand production has soared. The United States, UK, and Germany had led the world in terms of beer consumption till 1960 and accounted for nearly half of worldwide beer consumption by volume. Consequently, brewing enzymes market has registered commendable profitability in North America and is expected to grow at a substantial growth rate over 2018-2024. However, countries in Asia Pacific such as India, China, Japan and Vietnam have also laid a major claim in the beer consumption landscape in the past decade. In the recent times, China surpassed United States as the largest beer market while Russia overtook Germany and Brazil ranked above UK. Not only the population explosion in these countries, but also the changing economic developments in the nations can be attributed to the higher consumption of beer. It is estimated that Asia Pacific will holds a major proportion of the industry share, having held a valuation of around $80 million in 2017. It is of significant importance that beer consumption in China and Russia increased noticeably after the countries converted from communism to capitalism. Also, most of the Asian countries have exhibited the trend of increasing per capita incomes with rapid urbanization and industrial development. With increasing disposable incomes, beer consumption has substantially rise, leading to exponential growth in the brewing enzymes market. The brewing enzymes market has also significantly gained momentum with the changing patterns of beer trade. While previously the beer landscape was dominated by a few leaders like Corona, Guinness and Heineken, the easing of trade facilities in the 21st century has led to massive and fundamental changes in the international beer markets. As countries started to taste beer from other nations that they had to access to before, the taste palette for beer widened to bring a newfound interest in craft beer. In the more developed nations that had been consuming beer for centuries a trend has also been noted that instead of volume, consumers are concentrating on quality. The general consensus is turning towards tasting better beers rather than cheaper ones. As the 21st century consumer is more willing to pay a premium to enjoy specialty beers, the craft beer industry recorded phenomenal progress and added a new growth avenue to the brewing enzymes market which is expected to garner major profits from untraditional beer brewing. Considering that nations with increasing GDPs can open up new growth prospects for the brewing enzymes market, industry leaders like DuPont Industrial Biosciences have already started to take up initiative in such countries to boost the development of the brewing enzymes industry. For instance, recently in 2018, DuPont Industrial Biosciences along with Versuchs- und Lehranstalt für Brauerei of Berlin came together to arrange the Africa Brewing Conference in Addis Ababa, Ethiopia in 2019 in order to discuss the best practices for the brewing and malting industry in Africa. Brewing enzymes industry has come to recognize Africa as an important region where the industry can register major growth by encouraging the local brewing companies and parting with brewing technology and knowhow. The forum would be focusing on technical and scientific aspects of beermaking to compound the progress of brewing enzymes market in the process. With such endeavors brought forth by industry leaders widening the scope for the brewing enzymes market, the industry is expected to surpass $393 million by 2024.Inquiry before buying @ https://www.gminsights.com/inquiry-before-buying/2009Continue… About Global Market Insights: Global Market Insights, Inc., headquartered in Delaware, U.S., is a global market research and consulting service provider; offering syndicated and custom research reports along with growth consulting services. Our business intelligence and industry research reports offer clients with penetrative insights and actionable market data specially designed and presented to aid strategic decision making. These exhaustive reports are designed via a proprietary research methodology and are available for key industries such as chemicals, advanced materials, technology, renewable energy and biotechnology.Contact Us: Arun Hegde Corporate Sales, USA Global Market Insights, Inc. Phone: 1-302-846-7766 Toll Free: 1-888-689-0688 Email: sales@gminsights.com Web: https://www.gminsights.com Explore Our Blog @ http://algosonline.com/news Connect with us: Facebook | Google+ | LinkedIn | Twitter

01-28-2019 | Business, Economy, Finances, B …
Orbis Research
Gose Beer Market 2019 Anderson Valley Brewing Company Stillwater Artisanal Ales …
Gose is a top-fermented beer that originated in Goslar, Germany. It is brewed with at least 50% of the grain bill being malted wheat. Dominant flavors in gose include a lemon sourness, an herbal characteristic, and a strong saltiness (the result of either local water sources or added salt). Request a Sample of this Report @ http://www.orbisresearch.com/contacts/request-sample/2398578 This report focuses on the Gose Beer in global market, especially in North America,
12-07-2018 | Health & Medicine
Black Brewing Co.
Black Brewing Co.
At Black Brewing Co., we make some of the most uncompromising craft beers in the Margaret River region. Generous, bold and wold at heart, our beers tell a refreshing tale of time and place, inspired by Western Australia's incredible people and produce. At Black brewing Co., we're thirsty for new experiences and flavours, which is why we develop and discover new and adventurous brews all the time. Contact us, or
09-18-2018 | Business, Economy, Finances, B …
WISE GUY RESEARCH CONSULTANTS PVT LTD
Organic Beer Market 2018 Analysis By Key Players – Asher Brewing, Bison Brewin …
This report studies the global market size of Organic Beer in key regions like North America, Europe, Asia Pacific, Central & South America and Middle East & Africa, focuses on the consumption of Organic Beer in these regions. This research report categorizes the global Organic Beer market by players/brands, region, type and application. This report also studies the global market status, competition landscape, market share, growth rate, future trends, market drivers,
07-25-2018 | Business, Economy, Finances, B …
Research for Markets
Chocolate Beer Market 2018: Global Industry Top Key Players: New Belgium Brewing …
ResearchForMarkets added a new research on Chocolate Beer Market Research Report provides in-depth information and professional study 2018-2023 of chocolate beer industry. This Report is segmented into Manufactures, Types, Applications and Regions. the global chocolate beer market report also shares details of upstream raw materials, downstream demand, and production value with some important factor that can lead to market growth. Chocolate Beer Market Report contains key drivers and Restraints of the
03-08-2018 | Business, Economy, Finances, B …
WISE GUY RESEARCH CONSULTANTS PVT LTD
Chocolate Beer Market 2018 Global Analysis By key Players – New Belgium Brewin …
Chocolate Beer Market 2018 Wiseguyreports.Com adds “Chocolate Beer Market –Market Demand, Growth, Opportunities, Analysis of Top Key Players and Forecast to 2023” To Its Research Database. Report Details: This report provides in depth study of “Chocolate Beer Market” using SWOT analysis i.e. Strength, Weakness, Opportunities and Threat to the organization. The Chocolate Beer Market report also provides an in-depth survey of key players in the market which is based on the various objectives
08-30-2017 | Business, Economy, Finances, B …
Market Research Future
Organic Beer 2017 Global Key Players are Asher Brewing, Bison Brewing, Butte Cre …
Market Research Future published a half cooked research report on the global organic beer market, which is estimated to grow at a CAGR OF 6.8% from 2017 to 2023 The Global Organic Beer Market Information: By Type (Ale, Lager, Stouts & Porters And Others), By Ingredients (Malt, Yeast, Enzymes, Hops, And Others), By Certification (100% Organic, 95% Organic) And By Region - Forecast To 2023, Organic malt beer brewed with traditional
Comments about openPR
OpenPR ist the nicest and most clearly laid out PR platform I have seen to this day. The press releases are displayed very nicely and clearly and without any unnecessary frills. The updates are fast and the finished release looks appealing and is clearly legible. Even with 16 years of experience one discovers new things from time to time. Congratulations!
Gabriele Ketterl, Director Marketing & PR, Menads