Clearwater's Swing Dance for Charity Literally For the Birds 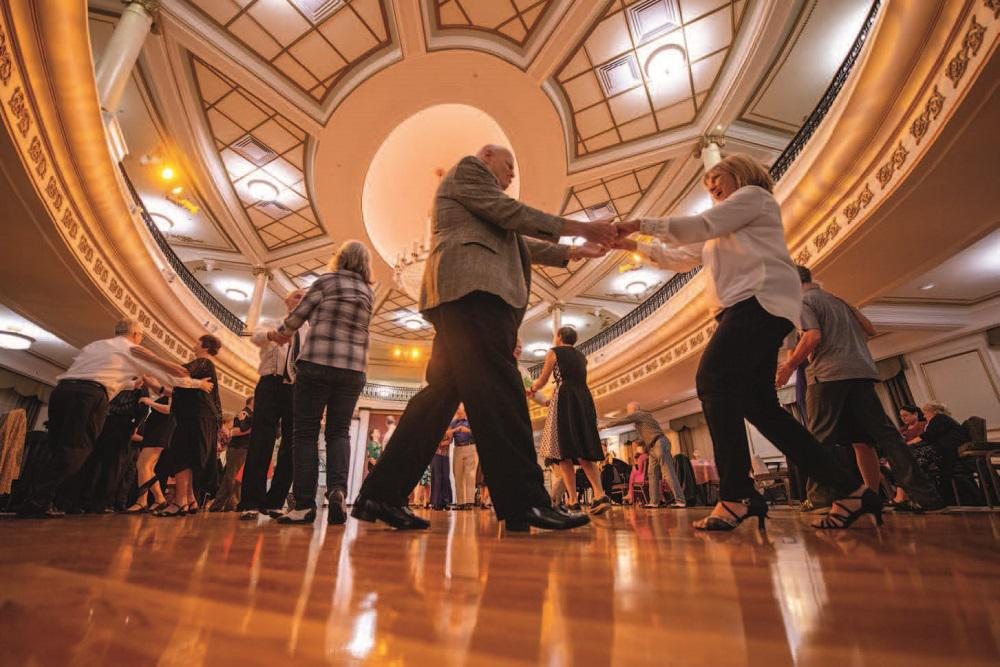 On Thursday January 10th at Clearwater’s Fort Harrison, Savoy South Dance Hall kicked off the New Year with the monthly Swing Dance for Charity. Dancers turned out to support the Seaside Seabird Sanctuary and dance to the Flag Band, who performed traditional swing numbers as well as swing-tastic takes on modern pop songs. The Fort Harrison is the international religious retreat for the Church of Scientology Flag Service Organization, the sponsor of this monthly event.After refreshments, career dancer Ms. Arleene Bowles of Savoy South Dance Hall taught new dancers East Coast Swing. East Coast Swing is also known as the “jitterbug” and is said to have evolved from Lindy Hop during the 1940s. Swing dancing has seen a revival since the early 1990’s and has continued to maintain popularity. Guests were then introduced to the Seaside Seabird Sanctuary, represented by Keith Wilkins and rescued macaw Nemo. The Sanctuary is dedicated to wild bird rehabilitation and currently has more than 100 birds at its facility that are unable to be released back in to the wild. Nemo suffered from abuse by its former owner and was brought to the sanctuary, where she now acts as the facility’s official greeter. "In the Way to Happiness, L. Ron Hubbard wrote ‘Care of the planet begins in one’s own front yard’ and the work that is being done by the Seabird Sanctuary shows that a determined group of people can be effective in taking care of a key part of Florida’s wildlife – birds,” said Lisa Mansell, the Public Affairs Director for the Church. All of the funds donated at the dance that night were given to the Sanctuary to continue their rescue and rehabilitation efforts. After learning about the Sanctuary, guests crowded the dance floor to swing to the Flag Band. The Flag Band also provided musical accompaniment for the traditional “Cake Walk” which gave guests another opportunity to donate to the Seaside Seabird Sanctuary. Three different handmade desserts were awarded to 3 lucky winners – Last Dancer Standing, Best Strut and Best Dressed.The February Swing Dance will be held on the 21st and will benefit Criminon Florida. Criminon (which means “no crime”) is an international non-profit dedicated to addressing the causes of criminality and restoring the criminal’s self-respect through effective secular education programs. A donation of $15 includes refreshments, a dance lesson and swing dancing to the Flag Band. The dance lesson starts at 7pm, with open dancing at 8pm to the Flag Band. Partners are not required and experienced dancers will be on hand to assist Ms. Bowles. For more information about the event, please call (727) 467-6860.About the Fort HarrisonSince completing construction in 1926, the Fort Harrison has been the home to many events for charitable organizations. The latest owner, the Church of Scientology, completed a top to bottom restoration of the Fort Harrison in 2009, and since then has hosted over 320 community events there. Scientology is an applied religious philosophy, founded by L. Ron Hubbard. The Church makes its facilities available to non-profit groups as a service to the community.Lisa Mansell Public Affairs Office 503 Cleveland Street Clearwater, FL 33755

01-11-2021 | Arts & Culture
Girl in the Jitterbug Dress
When You Can't Dance Because of Covid
When we can’t dance, because of restrictions and closures, we can read about it and immerse ourselves in our lost world. In 1943, Life Magazine declared Lindy Hop America’s folk dance. With its combination of African dance coupled with European partner dancing, brought to life by original American Big Band Swing Music, the Lindy Hop took the world by storm. There was no better place to Lindy Hop than Harlem’s Savoy Ballroom,
11-14-2017 | IT, New Media & Software
Fior Markets Research
Global Dance Studio Software Market 2017 - Zen Planner, Compu Dance, Dance Studi …
The Global Dance Studio Software Market Report will provide important aspects with overall outlook of the market worldwide. The market report delivers statistical data of market’s size in terms of both volume and value and forecast for Dance Studio Software market. The forecasts are further mentioned for the top segment of the Dance Studio Software market. Download Free Sample Report @ https://www.fiormarkets.com/report-detail/134267/request-sample In the beginning of the report, description of the market
04-23-2014 | Arts & Culture
Adelphi University
Adelphi University Department of Dance Presents Spring Dance Adelphi
Adelphi University Department of Dance is proud to present its annual program, Spring Dance Adelphi. This year’s Spring Dance Adelphi will be a mixed program and will take place from May 2-4 and May 9-11, 2014 in the Olmsted Theatre in the Adelphi University Performing Arts Center (AUPAC), located at 1 South Ave, Garden City NY. Thirty-eight students will perform in five pieces from five different choreographers, with musical styles
12-07-2011 | Arts & Culture
Redlight-Media
Marq Aurel feat. MeeShaill new dance song
Turn up the volume for Marq Aurel's brand new winter dance hit featuring MeeShaill. Crackin basses warm up the floors during the cold season and enchanting vocals by the talented singer MeeShaill make this great track perfect. MeeShaill is the singing part of the TWIN M project and gave his voice to the song "Came to say Hello". After having great success with his latest releases "Road Rat", a co-production with BEATBREAKER which
10-20-2011 | Tourism, Cars, Traffic
South Central Zone Cultural Centre, Nagpur
Orange City Craft Mela & Folk Dance Festival
The South Central Zone Cultural (SEZCC), Nagpur is organizing Orange City Craft Mela & Folk Dance Festival from 8th to 21st October, 2011 at the Centre’s premises, Civil lines, Nagpur. SEZCC, Nagpur, is one of the seven Zonal Cultural Centres, established in India in the year 1986 with its headquarters at Nagpur to preserve, promote and proliferate the cultural heritage and legacy of our Country. It constitutes
09-05-2011 | Arts & Culture
Nuevolution Dance Studio
Nuevolution Dance Studio Open House
Finally we are conducting our first open house at our new location. Free Admission to all who come. Many different classes and shows for that day. LA Style Salsa Argentine Tango Bachata Cha Cha Casino / Rueda Zumba Yoga Tae Bo and much more... Special Raffles Class Package Deals Nuevolution Dance Studio 8979 Taft Street Pembroke Pines, FL 33024 For more more information check out the website or give us a call www.nuevolutionsalsa.com 954-376-9841 "Innovate your Body and Soul" Nuevolution Dance Studio, the premier Latin Dance School in Pembroke Pines, provides students
Comments about openPR
We publish our press releases on openPR.de because we like people who are "open" - just like us.
Frank Obels, CEO, INCONET - Informationssysteme, Communication und Netzwerkberatung GmbH