HaCon expands its activities in Scandinavia 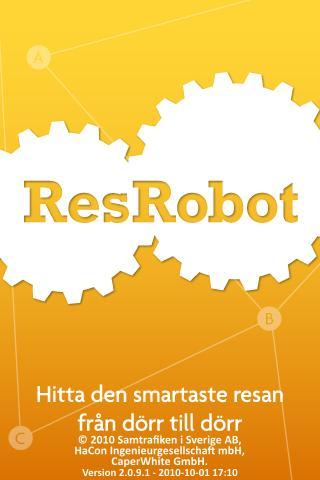 The new HAFAS-based travel planner for Sweden (ResRobot) is now available for Smartphones.

Hannover. Samtrafiken links all trips by train, bus, subway, tram, ferry and plane of about 50 different carriers in a compact transport network for the whole of Sweden. In addition, the company, which is jointly owned by more than 30 public transport operators, supplies passengers with information on all these connections. Samtrafiken now converts the necessary information systems to HAFAS, the timetable information system developed by HaCon. This will be done successively for the different regions of Sweden. The new HAFAS-based travel planner for the whole of Sweden (ResRobot) will also allow for future trips planned from door to door across different means of transport.To this end, in the coming weeks the Swedes get a package that includes many of the latest technological developments around HAFAS: Internet timetable information, including reachability searches and personal timetable in Print2Web process. Even tools for the production of printed timetables and the latest HAFAS Mobile versions for mobile phones and Smartphones of different manufacturers belong to the intended scope of delivery. This includes applications for mobile devices with convenient features, such as large touch screens, fast Internet connection and GPS location. The mobile operating system Android™ and the iPhone provide for all that.Since October, for the iPhone and for Android, passengers can already download HAFAS Mobile for free in the App Store and at the Android Market. Passengers have the opportunity to have nearby stops displayed on their mobile phones. HAFAS for the Internet will go live in the next few months. ResRobot will not only include new functions but will also appear in a new design. HaCon Managing Director Michael Frankenberg: "We want to deliver an innovative product package to Samtrafiken with the latest HAFAS technologies for the Internet and for mobile phones, so that passengers can make optimum use of timetable information."The goal of Samtrafiken is to make it easy for passengers in Sweden to opt for public transport. "Satisfying passenger information is crucial for an attractive offer in the public transport sector," says Stefan Thulin, Technical Director at Samtrafiken. “Through convenient and comprehensive planning tools Samtrafiken wishes to increase usage of the transport services provided by the owners of Samtrafiken”, explains Thulin further.With Samtrafiken as a customer, HaCon further expands its activities in Scandinavia: The HAFAS customers there include the transport network SL (Stockholm Public Transport). SL is responsible for public transport in the Stockholm area and deploys HAFAS in his travel planner. Also the second largest public transport network in Sweden, Västtrafik, who operates in and around Göteborg, has opted for HAFAS in 2010. Norsk Reiseinformasjon (NRI) in Norway and Rejseplanen in Denmark rely on HAFAS, too.Samtrafiken is jointly owned by 34 carriers, including all local public transport companies as well as Arlanda Express, People Travel Group (Merresor and Flygbussarna), SJ, Svenska Tågkompaniet and Veolia Transport, BT Buss, Swebus Express, Destination Gotland and Waxholmsbolaget. The parties deliver their timetable data to Samtrafiken. These are stored in a national database.Please contact for further information: HaCon Ingenieurgesellschaft mbH, Lister Straße 15 | 30163 Hannover | Germany | Phone: +49 (0) 511 3369 9-0, www.hacon.deAbout HaCon Right from the start in 1984 HaCon has focused its activities on traffic and logistic solutions. A team of more than 125 experienced employees in the ranges of IT and transport planning have turned the company into one of the leading players in the field of planning, scheduling and information systems. HaCon has developed and implemented the timetable information system of Deutsche Bahn (German Railway). Furthermore, numerous European railway companies, transport enterprises and/or groups use the timetable information system HAFAS. In addition, HAFAS serves as a universal information system. Therefore, it can be applied in the flight and goods traffic as well. Another successful product developed by HaCon is the Train Planning System TPS for timetable construction and network capacity management. It convinces more and more customers across Europe.HaCon Ingenieurgesellschaft mbH, Lister Straße 15, 30163 Hannover, Germany, info@hacon.de, www.hacon.de Press Contact: Amelie Dettmer | Phone: +49 511 33 69 9-226 | Fax: +49 5 11 33 69 9-99 | E-Mail: presse@hacon.de Thordis Stefanie Gooßes | Phone: +49 511 33 69 9-224 | Fax: +49 5 11 33 69 9-99 | E-Mail: presse@hacon.de

12-20-2011 | IT, New Media & Software
HaCon Ingenieurgesellschaft mbH
TK Telekom Navigator wins the Ernest Malinowski Award
HAFAS Mobil Professional proves convincing in Poland Hannover/Danzig – 20 December 2011. HAFAS Mobile Professional comes out on top as the Ernest Malinowski Award is presented at this year’s international TRAKO Railway fair. Awarded every two years for the most interesting products and technical innovations in the railway industry, the prize in the IT section went to TK Telekom, a subsidiary of the Polish State Railways (PKP), for their Navigator based
06-10-2011 | IT, New Media & Software
HaCon Ingenieurgesellschaft mbH
Rhine-Main Transport Association (RMV) relaunches its journey planner with HAFAS …
Hannover. April showers bring May flowers at RMV: The Rhine-Main Transport Association presents itself on rmv.de with a visually completely new created journey planner. Basis is the timetable information system HAFAS from the software expert HaCon which is on active service since 2005. The association and HaCon have completely redesigned the previous journey planner and provided it with new features. The result is a new, modern appearance which is clearly-structured
05-30-2011 | IT, New Media & Software
HaCon Ingenieurgesellschaft mbH
Turning clients into friends: HaCon goes Facebook
Hannover (2011-05-30). A few weeks ago the fan page of the software specialist went online and now is multiplying the number of those pushing the “like” button. With being present on Facebook clients and friends are offered the possibility to become a fan of the software developer and get in active exchange with the HaCon team. HaCon regularly posts news from the company and on the subject of journey planning and
05-26-2011 | Logistics & Transport
HaCon Ingenieurgesellschaft mbH
HaCon renews Samtrafiken’s online journey planner for entire Sweden
Hannover (2011-05-26). Samtrafiken links up all trips by train, bus, underground, tram, ferry and airplane of about 50 different transport companies in a compact manner for entire Sweden. In addition, Samtrafiken provides passengers information to all those connections, among other things on the online journey planner ResRobot. This one has now been switched to the timetable information system HAFAS of the software house HaCon and even been arranged more modern

02-15-2011 | Logistics & Transport
HaCon Ingenieurgesellschaft mbH
First HAFAS customer launches reachability search from HaCon
Hannover (2011-02-15). Since February, travellers in Norrland, the northernmost part of Sweden, benefit from the new timetable information system for public transport. The Internet information service Norrlandresan – Swedish for travel in Norrland – offers passengers many top features of HAFAS, the timetable information system from the software specialist HaCon. Practically used for the first time is the reachability search. As a 1:n-search Norrlandresan displays connections to all final destinations
02-10-2011 | Logistics & Transport
HaCon Ingenieurgesellschaft mbH
German Railways (DB) opt for HAFAS Information Manager HIM from
Hannover. In order to inform passengers about problems on their journey without delay, German Railways (DB) deploy – at first in pilot operation – the HAFAS Information Manager HIM from the software specialist HaCon. Since the timetable change in December 2010, rail customers not only know whether their train will be on time. Thanks to HIM, they now also recognise at a glance whether their journey will be impaired by
08-05-2010 | IT, New Media & Software
HaCon Ingenieurgesellschaft mbH
Up to the mountain – HAFAS for the iPhone crests Switzerland
Hanover 2010-08-05). The journey planner for the iPhone developed by the German software specialist HaCon has just won over the heart of Europe – the region of Zurich. HAFAS Mobile for the iPhone provides travellers of the Zurich transport association (ZVV) with all the relevant timetables for long- and short-distance connections. These comprise individual timetable information, departure boards and area maps as well as information about the nearest stations. Travellers
06-03-2010 | Logistics & Transport
HaCon Ingenieurgesellschaft mbH
HAFAS app for the iPhone cracks the one million download mark
Hanover (2010-06-03) . End of May was the time: HAFAS mobile as an application for the iPhone reached a seven-digit number of downloads. Via the App Store from Apple passengers have downloaded HaCon’s mobile journey planner for the popular Smartphone more than a million times. Most downloads recorded the “DB Navigator” for the iPhone by Deutsche Bahn AG (DB). Their passengers have transferred the application about 700,000 times on their Smartphones.
04-16-2010 | Logistics & Transport
HaCon Ingenieurgesellschaft mbH
HAFAS User Conference sets the course for the future of travel by bus and train
176 participants, 87 companies, 14 countries – these are the facts and figures of the HAFAS User Conference 2010. All these customers of the Hanover-based software company HaCon followed this year's invitation to the 13th HAFAS User Conference on April 13th and 14th in Hanover. There they have learned about the latest product developments around the leading timetable information HAFAS. The so far unmatched statistics reflect the high status of
04-09-2010 | Logistics & Transport
HaCon Ingenieurgesellschaft mbH
HaCon realises HAFAS timetable information for Google Android™
Hanover – 2010-04-08. With HAFAS for Google Android™ Deutsche Bahn AG (DB) gets the travel planner DB Railnavigator going for all the Smartphones that use the new operating system by Google for mobile devices. As from now the application is available for free download in the Android Market. Android runs on mobile devices from different manufacturers such as HTC, Samsung, Sony Ericsson and Motorola. HAFAS Mobile for Android is much
Comments about openPR
I can't but agree to the positive statements about your portal: easy to use, clear layout, very good search function, and quick editing!
Jens O'Brien, Borgmeier Media Communication