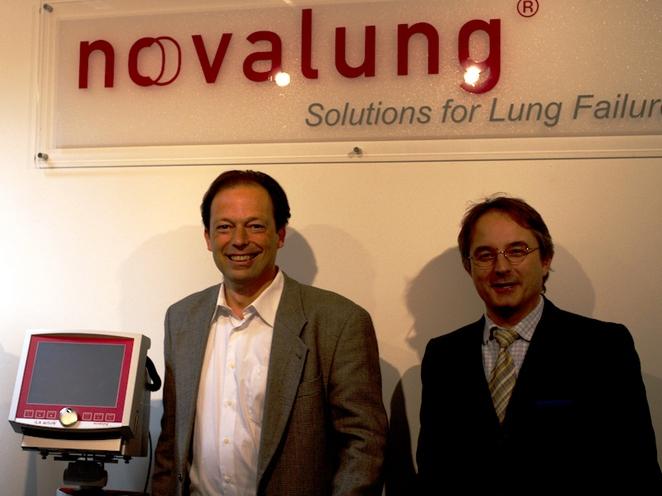 The innovative medical device company moves into new headquarters in Southern GermanyOn October 27th the new head office of Novalung GmbH was officially opened. During a short celebration CEO Dr. Georg Matheis and COO Hannes Wetscher inaugurated the new offices located in the newly constructed technology park “Zukunftspark” (Future Park) in Heilbronn, approximately halfway between Stuttgart and Frankfurt in the South of Germany.”Our innovative solutions for lung failure are gaining wide acceptance. We have numerous concepts for further urgently needed product developments. In order to implement these concepts we need sufficient space. Now,finally, we have the space here that we need“, Matheis noted. ”We are glad to finally be here in Heilbronn. The move into the ”Zukunftspark“ means being a step closer towards consolidation of our headquarters and manufacturing site. We also expect to benefit from the technical competencies of the other companies here“, says Wetscher. Novalung is one of the first tenants in the Heilbronn “Zukunftspark”. After the groundbreaking ceremony in September last year the new premises were completed on time for the scheduled move in mid October. The ”Future Park“ was initiated by the Zukunfstfonds Heilbronn, Novalung’s lead investor. The new technology park was built by the city of Heilbronn for research and development oriented companies. The relocation is a sign of Novalung‘s constant growth. After the founding of the company and initial operations in Germany’s ”Medical Valley“ in the city of Hechingen, its headquarters moved two years ago into temporary offices outside of Heilbronn. Novalung’s manufacturing operations also moved into a new, larger clean-room facility in the Heilbronn area at the end of 2009.Novalung - history Founded in 2003, the German company Novalung GmbH operates on a highly international level in order to establish new solutions for lung failure. These advanced technologies from Germany and the U.S. were brought into the company and developed further. The goal is to replace the damaging invasive ventilation. The overall objective is to replace damaging invasive mechanical ventilation.The privately funded Novalung GmbH is a fast growing medical technology company based in the area of Heilbronn/Germany and a subsidiary on the campus of the University of Michigan at Ann Arbor, USA.Novalung – Driver of a paradigm shift Novalung products allow a paradigm shift from the mechanically ventilated patient in an artificial coma to the awake, mobile patient breathing spontaneously. The innovative technologies to replace mechanical ventilation and eliminate the associated ventilator-induced lung injury continue this approach and provide physicians, nurses and patients with new therapeutic options.Novalung‘s vision for the future for the long-term treatment of patients with advanced lung disease is a small, wearable artificial lung that frees patients from respiratory stress, improves their overall condition and thus improves their quality of life.You can download high-resolution pictures as well as the literature compendium on www.novalung.com or it will be sent on request via email.Please send us a copy of your imprint.Contact:Mrs Franziska Preissing Head of Marketing franziska.preissing@novalung.com Phone: +49 7131 27 06 130 Fax: +49 7131 27 06 230Novalung GmbH Im Zukunftspark 1 Germany, 74076 Heilbronn www.novalung.com

News-ID: 151127 • Views: 1397
Comments about openPR
I can't but agree to the positive statements about your portal: easy to use, clear layout, very good search function, and quick editing!
Jens O'Brien, Borgmeier Media Communication