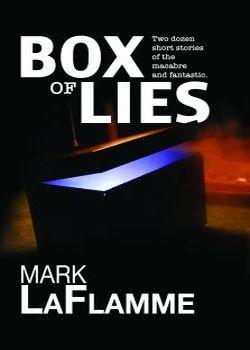 Crime reporter Mark LaFlamme wants the truth. He wants to know who killed JFK and exactly what goes on beyond the gates of Area 51. He wants to know where Jimmy Hoffa went and what really led to the terror of 9/11.The Maine author figures we are all entitled to the answers. If someone won't provide them, he'll just make them up.And so comes "Box of Lies" a new collection of fiction filled with speculation and curiosity gone mad. LaFlamme’s quest for knowledge transcends the earthly, as he seeks the truth about creation, the afterlife and the very nature of our existence.A mind reader sucks thoughts from both the living and the dead. A doctor discovers that the answers to all great questions might await in the grave. A professor suggests that we all may be nothing more than someone else’s work of fiction, and then sees horrifying evidence of his theory.In “Box of Lies,” LaFlamme presents a bleak future, where men and women are forced to walk for their daily bread, old people play games with ghastly prizes and the end of the world doesn’t guarantee a way out.A freak storm leaves half the population speaking gibberish, heaven may not be a permanent state and the tiniest decisions you make could influence the future in giant ways.Then there’s the title story in which LaFlamme places the burden of the truth in the hands of one man, a washed out soldier named Ernest Brush who knows it all and suffers because of it. In this overwrought and compelling character, we find LaFlamme’s own impatience and the frustration of realizing that the answers may never come. The result is a book that will frighten, shock and sicken you.And you won’t be able to put it down.Mark LaFlamme is a reporter and columnist at the Sun Journal in Lewiston, Maine and the Maine Press Association’s 2006 Journalist of the Year. His weekly column Street Talk has been named both Best in State and Best in New England. LaFlamme is the author of the novels “The Pink Room,” “Vegetation,” “Asterisk: Red Sox 2086” and “Dirt: An American Campaign.”MEDIA CONTACT Mark LaFlamme Email: laflammemark@gmail.com Phone: (207) 754 2799 Web: marklaflamme.comLAFLAMME IS AVAILABLE FOR INTERVIEWS. SEE THE VIDEO TRAILER FOR BOX OF LIES AT marklaflamme.com/box_trailerA new collection of short stories by Maine author Mark LaFlamme312 Webster St. Lewiston, ME 04240