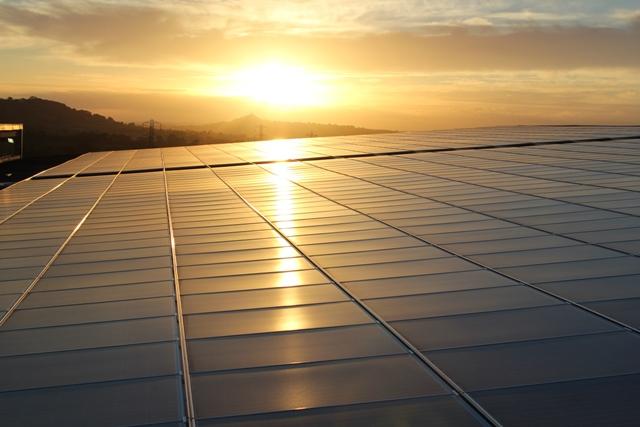 Biel, 02.11.2010. Today, Solarsense UK Ltd. starts operating Britain's largest private solar power plant. Solarsense has installed the 200 kilowatt plant on the cowhouse of the Worthy Farm in the town of Glastonbury in southern England. The grounds are used as a venue for Europe's largest open-air music festival, attended by roughly 200,000 guests from all over the world. "Our portfolio perfectly matches the individual segments of the important British photovoltaic market. That is why we are so pleased that this impressive project has also been fitted with SolarMax inverters,“ said Daniel Freudiger, General Manager of Sputnik Engineering International AG and Head of Sales & Marketing at the company's Swiss headquarters in Biel. Solarsense has purchased the inverters from Sundog Energy Ltd., one of the leading British companies for renewable energy systems.In Glastonbury two SolarMax TS series central inverters convert the direct current from more than 1,100 solar modules into grid-compliant alternating current. The yield is enough to supply 40 households with energy. In addition, the solar plant eliminates 100 tons of carbon dioxide emissions every year. "We decided in favour of Sputnik Engineering for our inverters because of their high quality," explains Kerry Burns, General Manager of the company which operates the system, Solarsense UK Ltd. "Besides, the price/performance ratio of the devices and the plant monitoring convinced us as well.“ Solarsense installed the internet-based data logger MaxWeb xp which warns Burns and his employees by SMS in case of an error. The solar plant is our figurehead,“ says Michael Eavis, the owner of the Worthy Farm and initiator of the Glastonbury Festival. "This has brought us one big step closer to our goal of operating the farm as ecologically as possible.“ Specifications Power output: 200.88 kWp Modules: 1,116 Romag modules Inverters: SolarMax 80TS and SolarMax 100TS Inclination and orientation: Inclination 5°, South Expected annual yield: 160.704 kWh Commissioning: 2 November 2010About Sputnik Engineering AG Sputnik Engineering AG, a Swiss company, is one of the world’s leading manufacturers of grid-connected solar inverters. Under the name SolarMax the company develops, produces and sells inverters for every facility – from photovoltaic systems on single-family homes whose kilowatt output is modest, to the solar power plants whose output is measured in megawatts. The inverter is a key component of the solar plant, transforming the generated direct current into grid-compliant alternating current. Superior efficiency and long service life are the hallmarks of SolarMax products, whose technology is always state of the art, because of their reliable Swiss quality. Today, Sputnik Engineering has a staff of 330 at its Swiss corporate headquarters and its subsidiaries in Neuhausen (Germany), Madrid (Spain), Milan (Italy) and Saint Priest (France) and at their branch locations in Brussels and Prague.Publisher: Sputnik Engineering AG Höheweg 85 CH-2502 Biel/Bienne Tel.: +41 32 346 56 00 Fax. +41 32 346 56 09 info@solarmax.com www.solarmax.com Press contact: Press Agency Krampitz Dillenburger Straße 85 DE-51105 Cologne Tel. +49 221 912 499 49 Fax +49 221 912 499 48 info@pr-krampitz.de www.pr-krampitz.com

11-02-2011 | Energy & Environment
Sputnik Engineering AG
MaxMonitoring - The SolarMax app for displaying system performance
Using the cost-free app MaxMonitoring, plant operators can have the performance data of their photovoltaic systems displayed at any time in their home. The app is available as of now in the Apple app store. Biel, 02.11.2011: MaxMonitoring, available for iPhone and iPad, as well as for Android smart phones as of the end of the year, is able to manage the data of a total of 15 facilities with up
08-19-2011 | Energy & Environment
Sputnik Engineering AG
SolarMax 330TS-SV receives BDEW unit certificate
Most powerful central inverter of Sputnik Engineering meets the criteria of the BDEW Medium-Voltage Directive. Biel, 18 August 2011: Newly commissioned grid-coupled inverters equipped with a direct medium-voltage connection in Germany must demonstrate their compliance with the directive “Generator plants on the medium-voltage network” by means of a unit certificate of the BDEW (German Association of Energy and Water Industries). The SolarMax central inverter 330TS-SV has now received this certificate. Evaluation
07-26-2011 | Energy & Environment
Sputnik Engineering AG
Top of the tree: SolarMax MT series awarded two "very good" marks at the Photon …
Biel, 25.07.2011. The trade publication Photon tested the SolarMax 13MT three-phase string inverter and awarded it with the prized "very good" seal of approval for its efficiency. The Sputnik Engineering AG device functions "not only precisely, but also efficiently" with MPP tracking and, according to the editors, also achieved other "very good results". This means that the device is one of the leading test candidates and "is an exemplary demonstration
06-02-2011 | Energy & Environment
Sputnik Engineering AG
New General Manager for Sputnik Italy - Raffaele Salutari new head of Sputnik En …
Biel, 31 May 2011. Raffaele Salutari is the new general manager of Sputnik‘s Italian subsidiary Sputnik Engineering Italia S.r.l. Since 30 May the 47-year old electrical engineer has been managing the twelve-man team in Giussano near Milano. The Italian disposes of long-term experience from managerial positions with different photovoltaics companies. With regard to his new employer Sputnik Engineering he considered the focus on inverters for grid-tied solar power plants, the