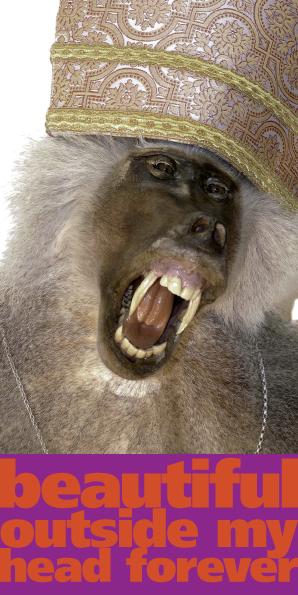 A life-size baboon in a bishop’s robe that, with one hand, is gathering his brocade coat and with the other swinging a soap bubble dispenser. A machine that is gradually grinding one-and-a-half kilos of precious pearls to dust. Worms as thick as a finger winding their way on a lacquered wooden box while producing knocking sounds. The objects and installations of the Munich-based artist Tom Schmelzer have a disturbing quality – they shock the observer. At the same time, they fascinate by the elegance of their execution. Without a doubt: This artist intends to provoke. But he achieves this in a most entertaining manner and with precise technical refinement. His choice of topics is rather substantial: Evolutionary history, criticism of capitalism and, last but not least, an analysis of the narcissistic art establishment. With the baboon installation “Homo Bulla”, for example, Schmelzer refers to the belated genuflection of the Archbishop of Canterbury, who acknowledged the teachings of Charles Darwin only in 2008. Until then, the Anglican Church still considered it a heresy when someone claimed that human beings are descendents from apes. With the soap bubbles, moreover, he is citing a baroque vanitas motive, the crystal ball, representing wisdom and the fragility of life. “Tom Schmelzer doesn’t just touch on sore spots, he directly strikes the eye with a fist,” the Sueddeutsche Zeitung wrote on the occasion of an exhibition last year. And this was meant in an altogether positive sense. More often than not, political art comes across as aesthetically laundered with fabric softener or bloodlessly conceptual. Tom Schmelzer, on the other hand, finds formally seductive forms of expression for complex socio-political issues. He doesn’t shy away from taking a stand. He also skillfully plays with the most varied nuances of humor: from a fine sense of irony to crude obscenity. Sometimes he will take his fellow artists to task. While some works indirectly cite the work of contemporaries like Damien Hirst or Maurizo Cattelan, others blatantly make fun of the art market’s mechanisms of delusion. His hat object made of 140 scarab beetles – an eccentric memento mori – is at the same time an unconventional homage to the British fashion designer Alexander McQueen, who passed away recently. “I understand the role of the artist as that of a translator – one who brings together things that actually don’t belong together, creating new experiences and helping the observer to gather insights. In this sense, my works represent models for the reality of those illusionary dreams we all have, or for the dark realms we don’t want to look at,” says Tom Schmelzer about his work. It is the artist’s greatest strength that, in view of all conceptual rigor and intellectual clarity, truly sensuous works of art emerge, which are not easily forgotten. Tom Schmelzer was born in Munich in 1966. He has studied the fine arts, medicine and philosophy in Munich, Oxford, Toronto and St. Louis, and did his doctorate in the field of neurology. Aside from exhibitions in the German Historical Museum in Berlin, the Haus der Kunst in Munich and the Kunstverein Wasserburg, he was already represented in group shows at WTC in 2007/2009. The exhibition “Beautiful outside my head forever” is Tom Schmelzer’s first solo show in Hamburg.White Trash Contemporary (WTC) was founded 2004 in New York with the aim to form a transatlantic artist network. The gallery represents young and underexposed artists and offers them an international platform. The gallery program encourages calculated risk taking and transgressive strategies to broaden the dialogue with established artistic positions. The main focus lies on “difficult art”: installation, sculpture and video.Gallery History:As a newcomer gallery in New York WTC set itself apart from the traditonal gallery scene with changing exhibitons at unconventional venues in the Financial District, the East Village and Spanish Harlem. With the move to Germany in Spring 2005 the gallery deliberately chose Hamburg as its new location: The 200 sqm storefront at Ost-West-Straße 56 next to famous St. Nikolai church and Hamburg’s city hall was located right in the center of the city. WTC opened in December 2005 with “VideoNow!”, a group show with new and groundbreaking video works by artists from Bulgaria, Germany, Finland and the United States. With its steady exhibiton schedule and cutting edge program the gallery quickly gained recognition among artists, curators and collectors. The German art magazine ART notes in July, 2007:“A lot is happening in some (Hamburg) neighborhoods long neglected in terms of art and life. If you walk along the river Elbe towards the old center of town you’ll find White Trash Contemporary. Since one and a half years Nils Grossien is staging an exciting program with international photography, video, installation, sculpture and painting in his gallery across the street from Nikolai church. His openings - wether with a “Mobile Blues Club” or a temporary “American bar” – are legendary already. Even curators from out of town institutions like Kunstmuseum Stuttgart or Kunsthalle Wien are coming to make discoveries here.”White Trash Contemporary Neue Burg 2 D-20457 Hamburg phone:+49.40.36099935 infowtc@mac.com www.whitetrashcontemporary.com Press contact: Mr. Nils Grossien

02-15-2008 | Arts & Culture
White Trash Contemporary Hamburg
German-Venezualien Art Exchange: The 8.th Velada Santa Lucia in Maracaibo/Venezu …
WTC and holzhauer hamburg are proud to announce their participation in VELADA SANTA LUCIA, an annual art festival taking place in Marcaibo, Venezula from March 7th to 10th 2008. As cutting edge galleries from Hamburg we were invited by the board of Velada Santa Lucia e.V., a non profit association dedicated to broaden cultural exchange between Venezuela and Germany, to curate an exhibition program for the Maracaibo art festival. Velada Santa
08-29-2007 | Arts & Culture
White Trash Contemporary Hamburg
OLIVER ROSS – Hard Edge Hippie Brain, 7.Sept.-12.Okt.2007, Vernissage Fr.07.Se …
After this summer of artistic mega events and worst case senarios, at a time, when in Venice the parties of the Biennal became more important than the exhibitons, when the curators of Documenta 12 cheerfully celebrated the “art of failure” and the critics reported that contemporary art has been completely swallowed by the mainstream and therefore lost its avantgarde edge, Oliver Ross steps forward to prove us all
04-26-2007 | Arts & Culture
White Trash Contemporary Hamburg
Toward Zero - an expedition to the zero-point of earth
On June 11th, 2007 the artists FallerMiethStüssiWeck (FMSW) are going to mark the geographical zero-point in the Gulf of Guinea with „Nothing“. The expedition Toward Zero is going to start in Hamburg, Germany, on May 8th, 2007. To achieve slow approximation to zero FMSW will be traveling by container ship towards the zero coordinate in perceptible speed. The geographical zero-point is the starting point of our world map