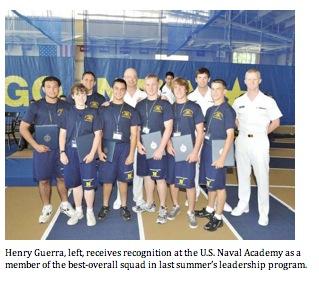 Henry Guerra, a senior at TMI – The Episcopal School of Texas, recently received a letter of assurance offering him admission to the U.S. Military Academy at West Point. This letter signifies that Guerra is guaranteed an appointment to attend the Academy, pending completion of the application process.“Letters of assurance are only sent to the most highly qualified Academy applicants,” says TMI Commandant Maj. Douglas McVey, “and is a significant acknowledgment of Cadet Guerra’s talent.”Guerra also has received several other national academic honors. He recently was named a National Hispanic Scholar through the National Hispanic Recognition Program that identifies outstanding Hispanic high-school students. To qualify, students must be at least one-quarter Hispanic, have earned a grade-point average (GPA) of 3.5 or above and meet their state’s cutoff score for the on the Preliminary SAT/National Merit Scholarship Qualifying Test (PSAT/NMSQT). He also received an AP Scholar award for completing three or more Advanced Placement examinations with grades of 3 or higher and was named a Commended Scholar in the National Merit Scholarship program, for which he qualified by having scored in the top five percent of more than 1.5 million students who took the 2009 PSAT/NMSQT.Guerra, a company commander in the Texas Military Institute Corps of Cadets, was selected to attend summer leadership programs at the U.S. Military Academy (West Point) and U.S. Naval Academy. At West Point, he received an award in the mechanical engineering class and at the Naval Academy, he was a member of the squad honored as best overall in drill, knowledge and physical fitness.At TMI, Guerra is a member of the National Honor Society and National Spanish Honor Society and is the recipient of a Frost Scholarship, a merit award for graduates of San Antonio Academy who have demonstrated high academic achievement and leadership potential. He also is a member of St. Pius X Catholic Church, where he is an altar server, lector, lay Eucharistic minister and Sunday-school teacher. A 2007 graduate of San Antonio Academy, he is the son of attorney Celinda Baez Guerra.About TMI – The Episcopal School of Texas: Founded in 1893, TMI is a private, co-educational, college-preparatory school for grades 6-12, with optional Junior ROTC and boarding programs. For information, visit www.tmi-sa.org or call 698-7171.TMI – The Episcopal School of Texas 20955 West Tejas Trail San Antonio, TX 78257