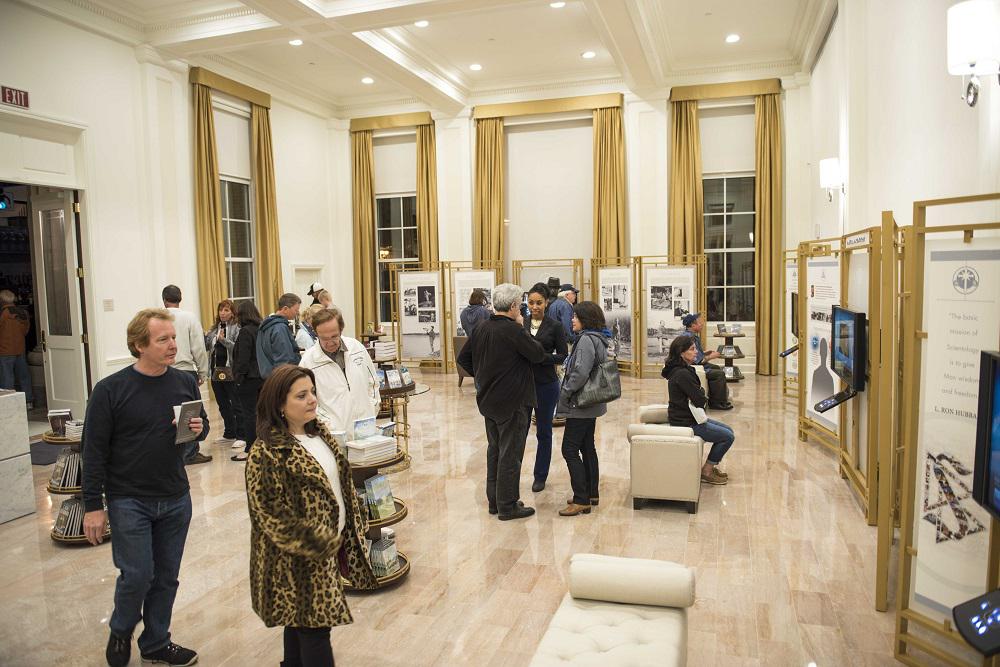 CLEARWATER, FL: An exhibit in one of downtown Clearwater’s most historic buildings could keep the winter blues away while providing tools to help people make their New Year’s resolutions stick. The Scientology Information Center will be providing educational materials, including videos and the live streaming of the Scientology Network at their downtown center daily between 10am and 10pm. The Center is located in the historic Clearwater Building at 500 Cleveland Street, which was built as the Bank of Clearwater in 1918. Entering the restored lobby, guests are invited to view any of the more than 400 videos which show the fundamentals of Scientology, the life story of Scientology’s founder L. Ron Hubbard and information about humanitarian programs sponsored by the Church and its parishioners.“One of the films we have here is adapted from an article by L. Ron Hubbard called ‘Is it Possible to Be Happy,’” said Amber Skjelset, the Manager of the Information Center. “In the article, Mr. Hubbard wrote ‘A lot of philosophers have said this many, many times, but the truth of the matter is that all the happiness you will ever find lies in you.’ There are many more topics people can come in and learn about and use in their lives – helping to steer away the ‘Winter Blues’ and enabling people to learn more about themselves and their relationships with others.” Films covering topics such as how to study, how to set targets and achieve your goals, solutions for a dangerous environment and the causes of suppression are also a part of the Center’s audio-visual displays. “Scientology is meant to be applied,” said Ms. Skjelset, “and it can be applied by anyone, regardless of their age, religion or education level, and I have seen these short films help many people.” The Center also provides visual displays on Church-sponsored humanitarian programs. Non-religious in nature, these programs include United for Human Rights – based on the United Nations Universal Declaration of Human Rights and the Truth About Drugs program. “People come to the Information Center and walk away with a better understanding of life. Our doors are open and I love to answer people’s questions,” said Ms. Skjelset. No appointment is necessary to visit the center, but for more information, please call 727-467-6966.ABOUT SCIENTOLOGY: The word Scientology, conceived by L. Ron Hubbard, comes from the Latin scio which means “knowing, in the fullest meaning of the word” and the Greek word logos which means “study of.” It means knowing how to know. Scientology is further defined as “the study and handling of the spirit in relationship to itself, universes and other life.” Since the forming of the first Church of Scientology in 1954, the religion has grown to span the globe. Today, more than 11,000 Scientology Churches, missions, related organizations and affiliated groups minister to millions in 165 countries. And those numbers are constantly growing; in fact, Scientology’s presence in the world is growing faster now than at any time in its history.Lisa Mansell Public Affairs Department 503 Cleveland Street Clearwater, FL 33755