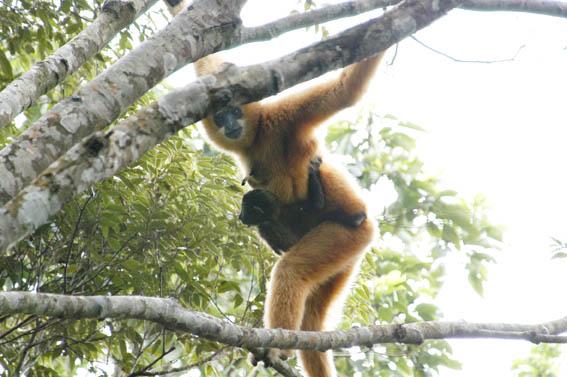 A gathering of the world’s gibbon experts, led by Fauna & Flora International (FFI), has declared a call to action to save the crested gibbons of South East Asia during the XXIII Congress of the International Primatological Society. “The crested gibbons are the most threatened group of primates and all species require urgent attention to save them from extinction”, said Thomas Geissmann, the world-renowned gibbon expert from Zurich University and FFI gibbon advisor.All seven species of crested gibbons are highly threatened and some are among the world’s most endangered mammals. They are found east of the Mekong River in Cambodia, Lao PDR, Vietnam and China. Several species have declined drastically over the past decade due to hunting and habitat loss caused mainly by rapid economic development.The plight of crested gibbons is exemplified by the world’s rarest ape, the Hainan gibbon. There are about 20 individuals remaining in two family groups on China’s Hainan Island. The Hainan gibbon’s closest relative is the cao vit gibbon, which survives in a patch of forest on the Vietnam – China border and numbers not much more than 100 individuals. “Current efforts by FFI appear to be turning round the fortune of the cao vit gibbon at the eleventh hour,“ said Paul Insua-Cao, FFI China-Indochina Primate Programme Manager.“FFI has been championing conservation of several of the world’s rarest gibbon species for more than a decade. The organization is working with local communities and government authorities across the range states of these gibbons to protect them and their habitat”.In the past FFI’s surveys have discovered several previously unknown populations of gibbons across the region, which have led to work to securing those populations for the future.Gibbon conservation attracts much less funding than that of the great apes such as gorillas and orang-utans. Hence, it is vital that projects are focused on those places with utmost importance for the survival of the species. The efforts of FFI and other like-minded organizations will need continuous investment and support for the foreseeable future to ensure the gibbons’ survival.For further information and high resolution photos, please contact: Rebecca Foges, Communications Officer Fauna & Flora International, Station Road, Cambridge, United Kingdom Tel: +44 (0) 1223 579 491 Email: Rebecca.foges@fauna-flora.orgHelen Pitman Communications Manager Mob: +44(0)7990555079About Fauna & Flora International (FFI) FFI protects threatened species and ecosystems worldwide, choosing solutions that are sustainable, based on sound science and take account of human needs. Operating in more than 40 countries worldwide – mainly in the developing world – FFI saves species from extinction and habitats from destruction, while improving the livelihoods of local people. Founded in 1903, FFI is the world’s longest established international conservation body and now a registered charity in the United Kingdom, United States and Australia. www.fauna-flora.orgFauna & Flora International Jupiter House Station Rd Cambridge CB4 3DW UK

02-01-2010 | Energy & Environment
Fauna & Flora International
British conservationist given prestigious award from the Royal Government of Cam …
Phnom Penh, 29 January 2010 – The Royal Government of Cambodia has awarded British conservationist, Dr Jenny Daltry, the title of Officer of the Order of Sahemetrei, given to foreigners for their “distinguished services to the King and to the Nation.” Dr Daltry was honoured with the award for wildlife conservation activities within the Kingdom of Cambodia. She has worked as Senior Conservation Biologist for British-based international conservation organization Fauna