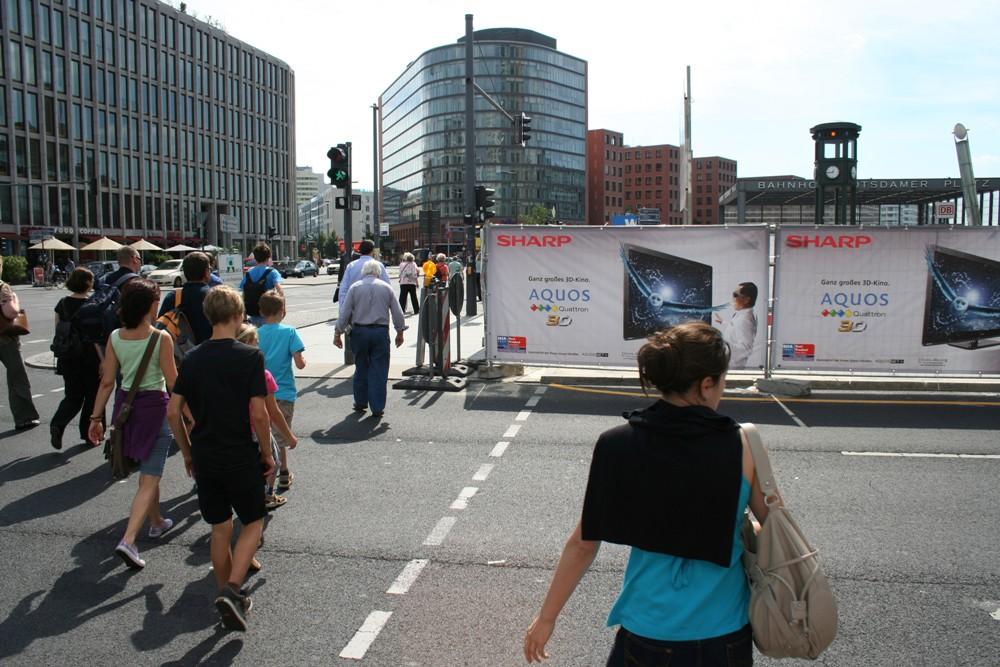 Whoever takes a walk around Potsdamer Platz in Berlin these days, cannot help but notice that the traffic island on Potsdamer Strasse is covered with a long visual protection fence. Large parts of the fence display the new 3D television from the Japanese technology corporation Sharp.Almost like in real television, the brand new device surrounds the stars like a frame: Until the grand opening on September 10th, the fence veils the construction of the “Boulevard of the Stars”, a growing monument similar to the “Walk of Fame” in Hollywood, which will pay homage to stars of the German-speaking movie and television world.Recently Sharps new technology „Quattron“ has been declared „innovation of the year“ by the EISA-jury. Just as their new technology, the advertisement at Potsdamer Platz hits the mark: The veiling of the TV-stars with the TV-motif already attracts the curious looks of the pedestrians passing by.„We are happy that we acquired Sharp for the Boulevard of the Stars and this premiere advertising location. We find it very appealing, that the advertising motif on the fence matches the television theme“, says Ilona Schwarz, CEO of the marketing agency wtm-Aussenwerbung. The successful veiling of the fence offers financial support for the new monument, which will help its development towards becoming Berlin’s latest tourist attraction.We can now hope that the appealing design of the fence will not steal the show at the celebratory inauguration of the monument.wtm Aussenwerbung is an independent media agency from Berlin, which specialises in marketing all outdoor advertising media in Europe. The agency coordinates smaller as well large cross-media and international outdoor advertising campaigns. It consults companies or their advertising agencies and carries out their campaigns from the media selection to their realisation and monitoring.wtm Marketing & Vertriebsconsulting GmbH Buckower Chausee 149 12305 Berlin GermanyTel: 030/742 005-61 Fax: 030/742 005-20www.wtm-aussenwerbung.de info@wtm-aussenwerbung.de