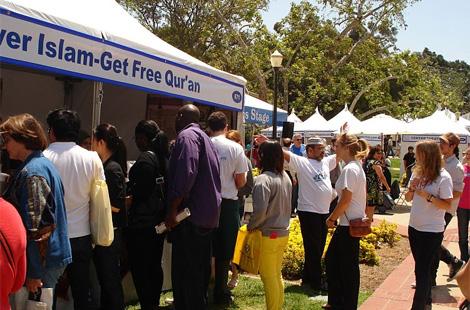 An ICNA booth distributing Qurans and other literature in Los Angeles, April 2010.

Los Angeles, CALIFORNIA (August 25, 2010) – The Southern California chapter of the Islamic Circle of North America (ICNA) issued a press release today calling the planned desecration of the Quran by a church in Gainesville, FL “misguided,” and announced that it would distribute 10,000 free copies of the Quran through its 1-877-WhyIslam outreach project in response to the Gainesville event. ICNA Southern California also launched www.sponsoraquran.com, a new Quran distribution initiative, specifically for this cause. Condemned by various local churches, synagogues and mosques, as well as the National Association of Evangelicals, the Gainesville event is scheduled for the ninth anniversary of the September 11th attacks. Although the city’s fire department has denied a permit for the public burning, the church’s pastor has stated the event will proceed as planned. During the past year 1-877-WhyIslam Southern California has distributed close to 10,000 copies of the Quran via 70 information booths organized at various public events. The Qurans are handed out in person, exclusively to non Muslims, upon request, and the chapter has said that it is poised to deliver nationwide through its network of hundreds of booths and volunteers. A consignment of over 7,000 copies is ready for distribution. See: WhyIslam Sets Record again at LA Festival of Books http://www.icna.org/2010/04/whyislam-sets-the-record-at-the-la-festival-of-books/ Amir Mertaban, Chairman of the ICNA chapter’s Dawah Committee said “We feel that a positive act like this is much more effective and appropriate in countering a hateful act like the one in Gainesville.” Muslims are obligated to respect other religions and their holy books, particularly the Bible, and Mertaban added that, “A Muslim would never burn a Bible.” http://www.icna.org/2010/08/quran-burning-877-whyislam-southern-california-responds/ The Islamic Circle of North America is a leading American Muslim organization dedicated to the betterment of society through the promotion of Islamic values. Since 1968, ICNA has worked to build relations between communities by devoting itself to education, outreach, social services and relief efforts. Islamic Circle of North America 166-26 89th Ave Jamaica NY 11432 Press Contact: Naeem Baig Vice President for Public Affairs E-mail: pr@icna.us Office: Extension: 102 Cell: (917) 202-2118 http://www.icna.org

10-18-2021 | Health & Medicine
Modesty Collection
Modesty Collections Introduces a Wide Range of Black Seed Hair and Beauty Produc …
Modesty Collections is a one-stop-shop Islamic superstore to buy black seed oil products in Australia at competitive prices. The Islamic community in Australia can now enjoy black seed hair and beauty products with convenience. Modesty Collections is proud to introduce its wide range of hair and beauty products that are made of organic black seed oil. Modesty Collections is a leading Islamic product online store that has two locations in
04-24-2020 | Science & Education
Tafheem ul Quran Academy
Online Quran Institute Near Me
Tafheem ul Quran is an easy way for you and your kids to learn Quran and Mathematics online, All you need is a PC/laptop or any other deivce and Internet connection. Tafheem ul Quran has been established with the aim of teaching the Holy Quran with proper Punctuation and vocabulary, our tutors are well qualified and experienced and provides classes with proper Tajweed Rules Via Skype online globally our services: Quran Learning
10-07-2019 | Science & Education
TQAPK
Online Quran Academy in USA
Study Quran online through innovative online learning. For Quran learning we have combined both ancient and modern methods of teaching. Our expert teachers provide education through one on one, online which are suitable for the entire family. Visit please: http://tqapk.com A 80, 3rd street, Gulshan-e-Maymar TQAPK provide online Quran learning in USA. We are leading online Quran academy for people who want to learn online any where in the world. Distance courses at us,
05-16-2018 | Advertising, Media Consulting, …
Typany Keyboard
How to make your day in Ramadan unique
As-salaamu alaikum! The month of Ramadan is almost upon us. It is the time for spiritual reflection and devoting ourselves to worship and pray to Allah. We have launched an exclusive Ramadan offer on themes and stickers. Here are four creative ways to observe Ramadan with family and friends using Typany Keyboard! 1 Change keyboard theme to the Ramadan Exclusive Edition 2 Set the keyboard theme with the photos of your family
08-01-2017 | Politics, Law & Society
Morten St. George Websites
Alien Astronauts Transmitted The Holy Quran to Muhammad - Says UFO Website
FOR IMMEDIATE RELEASE CONTACT Morten St. George Websites Street – 1 NW 33rd Terrace City – Fort Lauderdale State – Florida Zip Code – 33311 Country – United States or America Website - http://mortenstgeorge.info Email – contact@mortenstgeorge.info Contact Person - Morten St. George Fort Lauderdale (US), 31st August 2017: An alien astronaut transmitting the Holy Quran to Prophet Muhammad may sound bizarre to many and especially for believers. But this is how the second largest religion in the world got its
12-04-2011 | IT, New Media & Software
ENMAC Engineering Ltd.
ENMAC - House of Digital Islamic Products
ENMAC, a Hong Kong based Company; manufacturer of world’s best Digital Islamic Products; has released latest versions of Digital Quran Color Series, GSM Quran Mobiles, Islamic eBook and Quran ReadPens. (New versions of Digital Quran includes: DQ804, EQ400, EQ509; GSM Mobile Phone includes: MQ72, MQ710, MQ3500 and PQ8990). Majority of Muslims listen to Quran’s Recitation on audio devices such as CD/DVD players, Tape recorders and most recently via hand-held digital
Comments about openPR
We publish our press releases on openPR.de because we like people who are "open" - just like us.
Frank Obels, CEO, INCONET - Informationssysteme, Communication und Netzwerkberatung GmbH