New book by Tracy Ross: Certainty of One 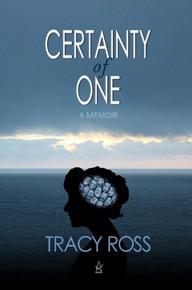 ADELAIDE BOOKS is proud to offer the latest work by Tracy Ross Certainty of One hitting stores everywhere on November 7th, 2018. Certainty of One is the story of a psychiatrist, a patient, a journey of five friends who, upon venturing to the abyss of the loneliness in their lives, find the unity they share amid the chaos of wastebasket diagnosis, prescription pharmaceuticals and the wondrous paradox of the School Room of life. It is a critical bird’s eye view into the evolution of cultural archetypes, the trappings of generational angst and the breakthroughs inherent in the choice of free will versus the established status-quo. It is an autobiographical memoir about the author’s struggles with schizo-affective disorder (Schizophrenia Spectrum) bipolar. It is not your ordinary sick lit tale but uses fantasy, science fiction, and humor into a fictional memoir epic about a writer coming to terms with delusion, reality, paranoia, and hallucinations. It is also a coming of age tale for the aging Generation X population, full of Hunter S. Thompson observations on life, liberty and the pursuit of happiness in the information age of the 21st century. In the tradition of Alice in Wonderland, Fear and Loathing in Las Vegas, Gravity’s Rainbow and the humor of Vonnegut, it takes the trials and tribulations of mental illness, turning the old stereotypes on their heads and becoming an instructional manual not only for staying sane but also of living with faith in intuitive leaps of the irrational and humorously truthful. Tracy Ross is a writer, poet and humanist. Her past times include counting cars, collecting rain water in jars, and skipping stones. She is currently earning her MFA in Poetics from Augsburg University. She lives and works in Minnesota.Available on AmazonADELAIDE BOOKS LLC is a New York-based independent company dedicated to publishing literary fiction and creative nonfiction. It was founded in July 2017 as an imprint of the Adelaide Literary Magazine, with the aim to facilitate publishing of novels, memoirs, and collections of short stories, poems, and essays by contributing authors of our magazine and other qualified writers.244 Fifth Ave., D27, New York, NY 10001 USA

You can edit or delete your press release New book by Tracy Ross: Certainty of One here

01-14-2019 | Science & Education
High Technologies Solutions
Get SAP Training From Certified Institute
Actuality SAP (the organization) is pushing the certification program. As of late, SAP has presented another three-level certification procedure to ensure the procedure is significant. They have spent a great deal of cash building up the certification and would not do as such on the off chance that they thought it was pointless and not required. Truth SAP is firmly promising clients to contract guaranteed specialists and believe in the
10-13-2017 | Associations & Organizations
FBDi e.V. (Professional Association of Component Distribution)
Legal certainty - quo vadis?
Clear instructions provide certainty and direction. They also prevent misunderstandings. Sounds logical, doesn’t it? And if something is unclear, we simply leave it out or make a detour around it – which is certainly what the current method of dealing with some conformity regulations appears to be like at least. What sounds absurd is the sad truth in the electronics industry: different interpretations between manufacturers, notified bodies and authorities have
08-16-2017 | IT, New Media & Software
Canopus Infosystems
Canopus outdo with another Google Digital Maps API utilization in the Mobile app …
Canopus Infosystems come up with the applications based on GIS mapping and Google Map APIs with more transparency and certainty of the Mapping solutions. Canopus expert in developing full fledged applications for the smartphones integrated with the Google Maps and GIS mapping platforms to serve the users in the productive and profitable way to utilize the maps to meet their needs. Canopus Infosystems, an Indian company is one of the leading
12-07-2016 | Arts & Culture
Brian McLaughlin
Certainty About The Afterlife Eliminates The Fear In One's Life Today - Brian Mc …
All human beings experience fear. However it is fear that lies at the very core of every negative mind state. So, if fear is eliminated, can that help us overcome those negative mind states? Is that even possible? Brian McLaughlin, NDE expert, TV host and author of 'A Flight Without Wings', believes it is possible. The list of things we fear is endless. There are the almost universal fears of sickness,
06-07-2011 | IT, New Media & Software
Elements Inc
CertaPro Painters Taps ElementsLocal to Increase Franchise Recruiting
SAN LUIS OBISPO, CA (June 1, 2011) – ElementsLocal™ announces the release of the Franchise Recruiting website for CertaPro Painters, the largest painting franchise in North America. CertaPro Painters has been ranked number one in their category by Entrepreneur magazine for 2011, 2010, 2009, and 2008 and is ranked 7th in overall franchisee satisfaction by Franchise Business Review. “CertaPro’s impressive success has been built on bringing a feeling of “certainty” to
04-02-2009 | IT, New Media & Software
Avolution
Avolution Named "Cool Vendor" by Leading Analyst Firm
Avolution, provider of the market leading Abacus® solution for the metrics-based analysis of architectures, today announced that it has been included in the list of "Cool Vendors" in the Cool Vendors in Enterprise Architecture, 2009 report by Greta James of Gartner, Inc. "We believe Gartner’s selection of Avolution further validates our position as the market leader for metrics-based analysis of architectures," said Dr Tim O'Neill, co-founder of Avolution. "Built upon a
Comments about openPR
We publish our press releases on openPR.de because we like people who are "open" - just like us.
Frank Obels, CEO, INCONET - Informationssysteme, Communication und Netzwerkberatung GmbH