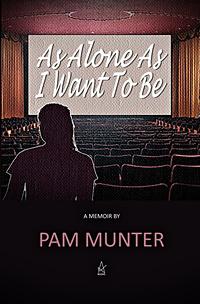 As Alone As I Want To Be by Pam Munter

ADELAIDE BOOKS is proud to offer the latest work by Pam Munter As Alone As I Want To Be.“’Life,’ George Bernard Shaw wrote, ‘is not about finding yourself. Life is about creating yourself.’ That experience—creating myself while living an adventurous life on a learning curve—is at the core of AS ALONE AS I WANT TO BE. The memoir is a feminist journey through a life lived deliberately—many lives, actually—as seen via an occasionally sardonic point of view, an eye for irony and humor and a consistent sense of awe. It will encourage readers to go for their dreams at any age but women over 50 might find much with which to identify. Achieving mastery in several fields is still unusual for a woman in contemporary society, much less one from an earlier generation.” Pam Munter is the author of When Teens Were Keen: Freddie Stewart and The Teen Agers of Monogram (Nicholas Lawrence Press, 2005) and Almost Famous: In and Out of Show Biz (Westgate Press, 1986) and has been a contributor to many others. She’s a former clinical psychologist, performer and film historian. Her first “publication” was a monthly four-page, carbon-copied newspaper she published about a local baseball team when she was nine. Since then, writing has infused every era of her life.She taught political science at California State University at Northridge during the volatile and often violent 1960s. During her tenure, the top floor of her office building was burned out, just a few days before she watched Robert F. Kennedy deliver one of his final speeches just yards from her office. After earning a Ph.D. in clinical psychology, she served as an Associate Professor at Portland State University (see “Walt”). It was a time for academic, research-based writing. Concurrently, in private practice, she published a groundbreaking quarterly newsletter for her clients.When she retired from clinical psychology, it allowed the time and opportunity to resume her lifelong passion for show biz. She jumped at the chance to perform in major cities, singing with a jazz trio (see “Romancing New York”). She also worked as an actor, appeared in independent films and numerous commercials, and hosted and produced an arts-based TV program. She recorded two CDs, the last a tribute to her childhood hero, Doris Day, at Capitol Records (see “Sinatra’s Mic”). She wrote all the shows and both album liner notes. Her many lengthy retrospectives on the lives of often-forgotten Hollywood performers and others have appeared in both Classic Images and in Films of the Golden Age.More recently, her essays and short stories have been published in Adelaide, The Rumpus, Matador Review, The Manifest-Station, Angels Flight—Literary West, The Coachella Review, The Creative Truth, Quiet Letter, The Legendary, and dozens of others. She is the nonfiction book reviewer for Fourth and Sycamore, a literary journal in Ohio, and is a Pushcart Prize nominee.But Hollywood has never been far away. She has published a series of short stories with a historical Hollywood theme. Her play Life Without was nominated by the Desert Theatre League for the Bill Groves Award for Outstanding Original Writing, along with a nomination for Outstanding Play. That Screwy, Ballyhooey Hollywood, another dark comedy, is slated for production soon. She has an MFA in Creative Writing and Writing for the Performing Arts from the University of California at Riverside in Palm Desert, her sixth academic degree.Pam’s personal life has been similarly eclectic, married to a man for nine years and later partnered with a woman for nearly 32 years. Her son, Aaron, and his spouse, Dana, live in Lake Oswego, Oregon. Since 2002, Pam has made her home in Palm Desert, California after living in Oregon for many years, a return to her native soil.Available on Amazon.ADELAIDE BOOKS LLC is a New York-based independent company dedicated to publishing literary fiction and creative nonfiction. It was founded in July 2017 as an imprint of the Adelaide Literary Magazine, with the aim to facilitate publishing of novels, memoirs, and collections of short stories, poems, and essays by contributing authors of our magazine and other qualified writers.Adelaide Books LLC 244 Fifth Avenue, D27 New York NY 10001 USA www.adelaidebooks.org office@adelaidebooks.org (Office Team) +1 917 477 8984