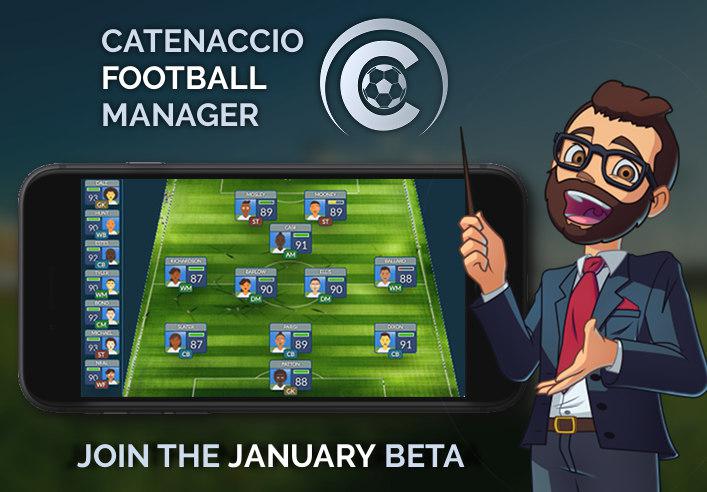 Catenaccio FM is a new FREE to play Online Football Manager game.It will be released by the end of January 2019 on several platforms, like Android devices, Apple devices, Steam and, of course, a web version compatible with the main web browsersCatenaccio FM has a custom engine that will simulate faithfully the development of the match, taking in consideration the specific values of the players, the tactics of both teams, the influence of the stadium and, like in every sport, luck can change the final results!Every manager will start from minor leagues and will challenge other users from the whole world. At the beginning of the career he/she will chose the name of the team and he/she will have a squad of 23 random players. The first 2 teams at the end of the season will be promoted to a new challenging league!To face the best manager of the world without getting hurt the users will need to improve their team. A good strategy is to have a mix of young talents - that will improve every year - and ready-to-go players The coach should also find the best tactics that will work for the squad!Scouting the market is the shortest way to add new aces up to the manager's sleeve! At the end of the season every user can choose to continue his career mode, by signin in a new league of other teams of his own level. In this game mode the team will age and the players will improve or get worst, depending of their age and their improvement curve. Another option is to create a brand new friendly league. In this game mode the time will freeze, but the players will be able to play against your friends no matter of their level.App and web version will be released by the end of January, but new features are already planned and will be added in the next months.Stay tuned on www.catenacc.io to don't miss our updates!Koronite OÜ is the developer and publisher of Catenaccio Football Manager. Based in Tallinn, Estonia is involved in the creation of new concept games.Sepapaja 6, Tallinn 15551, Estonia

News-ID: 1382598 • Views: 398
Comments about openPR
I can't but agree to the positive statements about your portal: easy to use, clear layout, very good search function, and quick editing!
Jens O'Brien, Borgmeier Media Communication