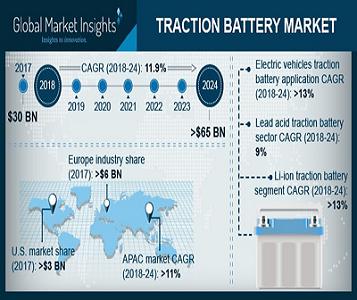 In line with the electrification trend in the automotive space, the global traction battery market seems to have carved out a rather pronounced growth path in the recent years. Changing consumer preferences toward utilization of clean energy and lowering the greenhouse emission is expected to have a greater impact on the deployment of electric vehicles on a global scale. Forming one of the most vital components of the automotive industry, the growth of the electric vehicle market has also inevitably gravitated much of the momentum in the electric vehicle batteries business sphere. According to estimates provided by the IEA, the global sales of new electric cars exceeded 1 million units in 2017 in terms of volume and exhibited nearly 54% growth in comparison to the statistics of 2016.

Get a Sample Copy of this Report: @ https://www.gminsights.com/request-sample/detail/2888

The recent years also saw automakers making several major EV announcements, which have had a direct impact on the traction battery industry share. To name a few, General Motors announced plans for 20 new Electric Vehicles models by 2023, Toyota said it plans to electrify its entire lineup by 2025, Ford announced investment of USD 4.5 billion into 13 new EVs, while Volvo revealed that all the models launched after 2019 will be either all-electric or hybrid. Quite overtly, endorsed by such initiatives of the automotive giants, traction battery market is indeed on its way to emerge as nothing but a lucrative vertical for potential investors.

Following its partnership in 2014 over the “Gigafactory”, Tesla and Panasonic have recently announced plans to expand its traction battery cell production by 30% by the end of 2018. The Gigafactory, for the record, is capable of producing more than 35 GWh of battery cells every year, which is not only likely to meet the global demand for traction batteries but is also expected to play an imperative role is making batteries energy efficient and cost-competitive.
In yet another instance, Audi recently announced that its first all-electric SUV, dubbed as the e-tron, has commenced production at its Brussels facility. Reports reveal that the e-tron is powered by large battery pack that has a capacity to store 95 kWh of energy. The company claims that the large traction battery comes with a 150-kW high-power charging (HPC) station and can be recharged within just 30 minutes.

The above-mentioned instances also bear testimony to the fact that numerous automakers are spending billions of dollars on electric technologies as they rush to hold a significant stance on the biggest change that has recently hit the automotive industry. Reliable reports claim that in 2017, automakers spent USD 200 million on electrification & autonomous vehicle technologies and will spend approximately USD 250 billion in the research & development and capital expenditures on electric vehicles by 2023. Moreover, around 207 electric models are set to hit the market by 2022. The data goes on to validate that the extraordinary expansion of the electric vehicle industry will also lead to robust traction battery market demand.

Make an inquiry for purchasing this report @ https://www.gminsights.com/inquiry-before-buying/2888

In view of the expanding number of electric vehicles on road and the increasing demand for high quality batteries, the commercialization of worldwide traction battery industry is set to witness an all-time high. On the regional front, the traction battery market saw notable expansion in the U.S., with overall region contributing to a revenue share of USD 3 billion in 2017. The credit of the same can be attributed to the supportive Federal policies that includes tax credits and purchase incentives for EVs on one hand and stringent emission control targets on other. Reports claim that in U.S. alone, EV sales climbed 21% in 2017, and is expected to remain a lucrative hotspot for traction battery industry players in the ensuing years.

China market is predicted to expand over 11% by 2024. The industry growth is largely attributed to the policies along with the introduction of tax incentives to promote the sales of electric vehicles. For instance, the national government, published around 39 policies since 2009 out of which nearly 50% were pertaining to electric vehicles, thereby facilitating the product deployment. According to the China New Energy Vehicle Development Project, The Ministry of finance, granted RMB100 billion to support the development of new electric vehicles during 2011-2020.

Forklift traction battery market will witness growth on account of growing industrialization, driven by material handling industry and increasing penetration of ecommerce. In addition, the growing prominence of electric forklifts as a means to minimize GHG emission will further stimulate the industry growth. The ability to offer lesser emissions and lower operating costs in comparison to internal combustion models will further complement the business outlook.

Favorable policy implementations and growing concerns to reduce the emission levels contributed by the transport sector will augment the market growth. Government led tax incentives, ambitious manufacturing targets, and growing investments of automotive manufacturers toward EV development will further facilitate the large-scale deployment of these batteries.

07-28-2020 | Tourism, Cars, Traffic
Khoja Consultants
$100,000,000 USD job contract for travel - $3,000,000 USD referral commission.
Khoja Consultants invites applications for companies, teams or venture capitalists for a $100,000,000 USD job contract for travel. The selected company will be providing all accommodations and expenses for a 6-month long business trip around the world. Khoja Consultants expects five-star treatment including close security with private planes, hotels, secured vehicles and helicopters if necessary. More details on the job contract and application are provided at - www.KhojaConsultants.com. There
06-19-2017 | Business, Economy, Finances, B …
MarketsandMarkets
Polyurethane Dispersions Market worth USD 2.04 Billion USD by 2020
The report " Polyurethane Dispersions Market by Type (Water-Based Polyurethane Dispersions and Solvent-Based Polyurethane Dispersions), by Application (Coatings, Adhesives & Sealants, Synthetic Leather Production, Fiber Glass Sizing, and Others) - Trends & Forecasts to 2020", The global polyurethane dispersions market is projected to reach USD 2.04 Billion by 2020 at a CAGR of 6.8% between 2015 and 2020. This growth is fueled by the high potential from the textile and
04-13-2017 | IT, New Media & Software
MarketsandMarkets.com
Retail Analytics Market worth USD 5.1 Billion USD by 2020
According to a new market research report "Retail Analytics Market by Business Function (Marketing and Customer Analytics, Merchandizing and In-Store Analytics, Supply Chain Analytics, Strategy and Planning), by Type, by Solutions and by Services - Global Forecast and Analysis to 2020", defines and segments the global retail analytics market on the basis of business function, solutions, services, deployment types, and regions along with providing an in-depth analysis and market size
11-01-2016 | Health & Medicine
iHealthcareAnalyst, Inc.
Metabolomics Market USD 1.24 Billion by 2020
The global metabolomics market is estimated to reach USD 1.24 Billion in 2020, growing at a CAGR of 15.6% from 2016 to 2020, according to a market research report Metabolomics Market 2013-2020, published by iHealthcareAnalyst, Inc. Visit the Metabolomics Market 2013-2020 report at https://www.ihealthcareanalyst.com/report/metabolomics-market/ Metabolomics is the scientific study of chemical processes involving metabolites, whereas metabolome represents the collection of all metabolites in a biological cell, tissue, organ or organism, which
10-31-2016 | Health & Medicine
iHealthcareAnalyst, Inc.
Radiopharmaceuticals Market USD 350 Million by 2020
Radiopharmaceuticals Market 2013-2020 report estimates the global radiopharmaceuticals market to reach nearly USD 350 Million in 2020, at a CAGR of 4.9% from 2016 to 2020 - iHealthcareAnalyst, Inc. Visit the Radiopharmaceuticals Market 2013-2020 report https://www.ihealthcareanalyst.com/report/radiopharmaceuticals-market/ Medicinal radiocompounds or radiopharmaceuticals are a group of pharmaceutical drugs which have radioactivity and they can be used as diagnostic and therapeutic agents. Radiopharmaceuticals are used in the field of nuclear medicine as radioactive tracers
10-19-2016 | Health & Medicine
iHealthcareAnalyst, Inc.
Orthobiologics Market USD 5.8 Billion by 2020
Orthobiologics Market 2013-2020 report estimates the global orthobiologics market to reach nearly USD 5.8 Billion in 2020, at a CAGR of 6.2% from 2016 to 2020 - iHealthcareAnalyst, Inc. Visit the Orthobiologics Market 2013-2020 report https://www.ihealthcareanalyst.com/report/orthobiologics-market/ The global orthobiologics market report provides market size (Revenue USD Million 2013 to 2020), market share and forecasts growth trends (CAGR%, 2016 to 2020). The global orthobiologics market segmentation is based on product types (allograft, bone
Comments about openPR
I can't but agree to the positive statements about your portal: easy to use, clear layout, very good search function, and quick editing!
Jens O'Brien, Borgmeier Media Communication