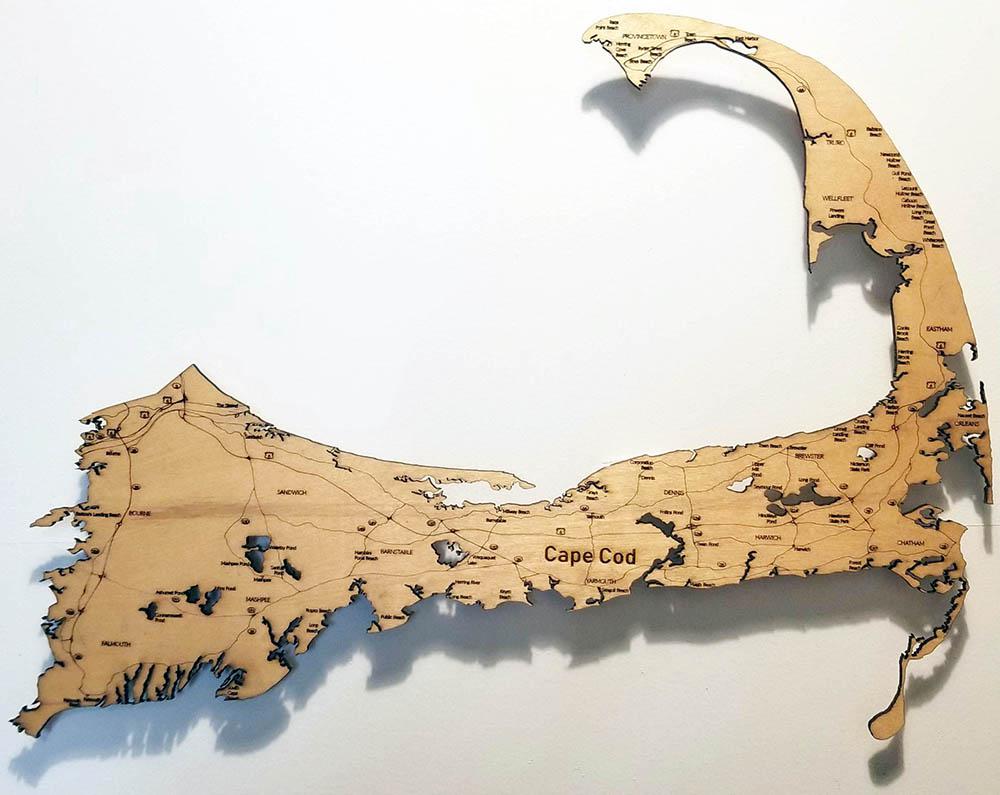 Meridian Maps, a small startup based in Ridgewood, New York, has debuted a unique type of wall art. Dubbed “Floating Maps”, they hover off the wall creating distinctive shadows. These custom works are precision laser-cut from hand-stained solid Birch wood and engraved with cartographic details. While most wall art is traditionally rectangular, these pieces are shaped to their geography. Instead of thinking outside the box, they’ve abandoned the box altogether. Meridian Maps first came on the scene last year with a Kickstarter launch of their Topo Maps. These 3D maps represent an area’s topography with wood layers. The campaign was a success, and the company was born. They were also recently featured in a Reuters "Generation Makers" segment. The new Floating Maps were unveiled this September at the World’s Maker Faire in New York City, an annual event for inventors and creators with an estimated 100,000 attendees from all over the world. “They were a hit,” says co-founder Vladik Kofman. “Many people were just stunned. We received a slew of orders right there at the Faire.” The best part is customers can select any region of the world they want as a map.Meridian Maps continues to innovate their map designs. “We wanted to create a piece that was both eye-catching and affordable.” The Floating Maps have the precision details of their layered and framed maps, but at a significantly lower price. Their hope is to be able to put these works in many more homes this way.The Process The maps are designed in a professional GIS mapping software. Features such as rivers, roads, political boundaries, towns and other points of interest are overlaid as desired. It is then exported to the laser cutter, where the sheets of Birch wood are laser-engraved and cut out to the area’s perimeter. These unique works make great conversation pieces and are fantastic gift ideas. The Floating Maps campaign ends on November 27. Head over to Kickstarter now to support this project and beat the holiday rush for this truly one-of-a-kind work of art. ###Meridian Maps creates custom-designed laser-cut wood maps. They are a startup based out of Ridgewood, New York City.Meridian Maps 1639 Centre St., Ste 118 Ridgewood, NY 11385

03-13-2018 | Business, Economy, Finances, B …
Persistence Market Research
Red Clover Market: Opportunity Map by 2025
Red Clover, with the scientific name Trifolium pretense, is a wild, leguminous, perennial herb, which is native to the meadows of Europe, Western Asia, and Africa. It has now been naturalized in many other regions of the world. Red clover is broadly distributed throughout the U.S. due to its nutritional benefits and properties. Nutritionally red clover contains isoflavones, which chemically change to phytoestrogens after entering the body, which is extremely beneficial
03-07-2018 | Business, Economy, Finances, B …
Persistence Market Research
Chemical logistic Market: Opportunity Map by 2021
A safe and reliable Logistics system is an important aspect of chemical industry. The manufacturing and consumption geography of the chemical industry are mostly separated apart. Therefore the chemical logistic has its part in the efficient, competitive and sustainable market development of the chemical industries. Chemical logistics are generally responsive, supple and adaptable; provide innovative service to respond to market changes rapidly and efficiently. The rising chemical market and shifting of
02-21-2018 | Advertising, Media Consulting, …
HTF Market Intelligence Consulting Pvt. Ltd.
Digital Map Market Is Thriving Worldwide
HTF MI published a new industry research that focuses on Digital Map market and delivers in-depth market analysis and future prospects of Global Digital Map market. The study covers significant data which makes the research document a handy resource for managers, analysts, industry experts and other key people get ready-to-access and self-analyzed study along with graphs and tables to help understand market trends, drivers and market challenges. The study is
04-18-2017 | Health & Medicine
MarketResearchReports.biz
Melanoma - Heat Map And Analysis
Melanoma is a form of cancer that begins in the melanin producing cells and commonly occurs in pigmented skin tissue such as moles ? a form referred to as cutaneous melanoma. It can also affect several other pigmented tissues of the body. Increasing global incidence over recent decades is thought to be due to an increase in exposure to UV light and/or sunlight. The disease is divided into two categories based
03-14-2017 | Health & Medicine
ReportsWorldwide
Cystic Fibrosis - Heat Map and Analysis
ReportsWorldwide has announced the addition of a new report title Cystic Fibrosis - Heat Map and Analysis to its growing collection of premium market research reports. Cystic fibrosis (CF) is a progressive genetic condition and is the result of a patient inheriting a faulty cystic fibroses transmembrane conductance regulator (CFTR) gene from both parents. The defective CFTR genes produce faulty CFTR proteins on the body’s epithelial cells, and result in
10-08-2013 | Industry, Real Estate & Constr …
heat 11 GmbH & Co. KG
Documentation per plant map
IT is what makes many process innovations possible – also in plant engineering and construction. With a plant map developed specially for heat transfer plants, the Bielefeld plant engineering company heat 11 goes in completely new directions when creating its operating and maintenance manuals. Companies of the plant engineering and construction have to establish mostly extensively documentations such as operating and maintenance manuals together with their products. Many set of rules
Comments about openPR
I can't but agree to the positive statements about your portal: easy to use, clear layout, very good search function, and quick editing!
Jens O'Brien, Borgmeier Media Communication