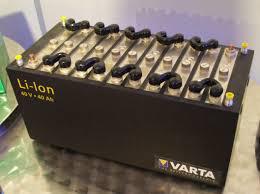 In line with the electrification trend in the automotive space, the global traction battery market seems to have carved out a rather pronounced growth path in the recent years. Changing consumer preferences toward utilization of clean energy and lowering the greenhouse emission is expected to have a greater impact on the deployment of electric vehicles on a global scale. Forming one of the most vital components of the automotive industry, the growth of the electric vehicle market has also inevitably gravitated much of the momentum in the electric vehicle batteries business sphere. According to estimates provided by the IEA, the global sales of new electric cars exceeded 1 million units in 2017 in terms of volume and exhibited nearly 54% growth in comparison to the statistics of 2016.

Get a Sample Copy of this Report: @ https://www.gminsights.com/request-sample/detail/2888

The recent years also saw automakers making several major EV announcements, which have had a direct impact on the traction battery industry share. To name a few, General Motors announced plans for 20 new Electric Vehicles models by 2023, Toyota said it plans to electrify its entire lineup by 2025, Ford announced investment of USD 4.5 billion into 13 new EVs, while Volvo revealed that all the models launched after 2019 will be either all-electric or hybrid. Quite overtly, endorsed by such initiatives of the automotive giants, traction battery market is indeed on its way to emerge as nothing but a lucrative vertical for potential investors.

Following its partnership in 2014 over the “Gigafactory”, Tesla and Panasonic have recently announced plans to expand its traction battery cell production by 30% by the end of 2018. The Gigafactory, for the record, is capable of producing more than 35 GWh of battery cells every year, which is not only likely to meet the global demand for traction batteries but is also expected to play an imperative role is making batteries energy efficient and cost-competitive.

In yet another instance, Audi recently announced that its first all-electric SUV, dubbed as the e-tron, has commenced production at its Brussels facility. Reports reveal that the e-tron is powered by large battery pack that has a capacity to store 95 kWh of energy. The company claims that the large traction battery comes with a 150-kW high-power charging (HPC) station and can be recharged within just 30 minutes.

The above-mentioned instances also bear testimony to the fact that numerous automakers are spending billions of dollars on electric technologies as they rush to hold a significant stance on the biggest change that has recently hit the automotive industry. Reliable reports claim that in 2017, automakers spent USD 200 million on electrification & autonomous vehicle technologies and will spend approximately USD 250 billion in the research & development and capital expenditures on electric vehicles by 2023. Moreover, around 207 electric models are set to hit the market by 2022. The data goes on to validate that the extraordinary expansion of the electric vehicle industry will also lead to robust traction battery market demand.

Make an inquiry for purchasing this report @ https://www.gminsights.com/inquiry-before-buying/2888

Forklift traction battery market will witness growth on account of growing industrialization, driven by material handling industry and increasing penetration of ecommerce. In addition, the growing prominence of electric forklifts as a means to minimize GHG emission will further stimulate the industry growth. The ability to offer lesser emissions and lower operating costs in comparison to internal combustion models will further complement the business outlook.

Favorable policy implementations and growing concerns to reduce the emission levels contributed by the transport sector will augment the market growth. Government led tax incentives, ambitious manufacturing targets, and growing investments of automotive manufacturers toward EV development will further facilitate the large-scale deployment of these batteries.

07-19-2018 | Advertising, Media Consulting, …
Future Market Insights
Vanillin Market gained high traction over years
Vanillin is primarily used in the food and beverages industry to enhance the sweetness of food items such as chocolates, candy, biscuits, ice-creams and cakes. Vanillin is extracted from an extract of the vanilla bean, and it’s considered to be an organic compound. Vanillin can be produced naturally or it can be chemically synthesized. The seed pods of vanilla planifolia is used to extract the natural vanillin. In order to
06-12-2018 | IT, New Media & Software
TMR Research
Managed Services Market gained traction over 2025
Managed Services Market: Snapshot The growing trend of adopting emergent technologies among enterprises to stay ahead of their competitors has been propelling the global managed services market significantly. The continual rise in the intricacy of technological solutions and the increasing dependency over the heterogeneous networks of infrastructure and application are also driving the growth of this market across the world. However, the long-term recurring expenses and the doubts regarding the efficacy
05-08-2018 | Business, Economy, Finances, B …
TMR Research
Hydrogen Storage Market Procure Sinewy Traction 2025
Global Hydrogen Storage Market: Overview The vast rise in demand for alternate power owing to depleting reserves and environmentally harmful nature of conventional power production processes has compelled researchers and government bodies to focus more on reliable alternative power sources in the past years. Research activities in this area have demonstrated the possible use of hydrogen as one of the key contenders in the field of alternative power. The vast potentials
03-30-2017 | Health & Medicine
Traction
Traction Equipment Market By Equipment Type Segment Analysis ( Traction Transfor …
ALBANY, NY, March 30, 2017 : This report by Transparency Market Research analyzes, estimates, and forecasts demand for traction equipment on the global and regional level for an eight-year period from 2016 to 2024 in terms of volume and cumulative revenue. The study also provides information on restraints, drivers, and opportunities along with their impact on the overall market during the forecast period. The report segments the market on the
12-21-2016 | Energy & Environment
Transparency Market Research
Traction Equipment Market (Equipment Type - Traction Transformer, Traction Motor …
The global traction equipment market is extremely technology-centric and is immensely fragmented. Despite the fact that only companies that can provide cost-effective and high-efficiency products can sustain in this market, the degree of competition is anticipated to remain high during the forecast period owing to the constant demand for traction equipment, especially from emerging markets. The global rise in the demand for mass transportation can be attributed to the surge in
05-25-2016 | Industry, Real Estate & Constr …
Expotrade
Level Crossing Removal Project gains traction
25th May, Melbourne, VIC: The Victorian government has embarked on an ambitious plan to remove 50 of the state’s most dangerous and congested level crossings around Melbourne. With 18 removals currently underway, the Victorian government has allocated $2.4 billion as part of the Victorian Budget 2015-16 towards the removal of at least 20 level crossings by 2018, with further plans to remove all 50 level crossings by 2022. Melbourne currently has
Comments about openPR
I can't but agree to the positive statements about your portal: easy to use, clear layout, very good search function, and quick editing!
Jens O'Brien, Borgmeier Media Communication