Press release from: Wear Your Twuth 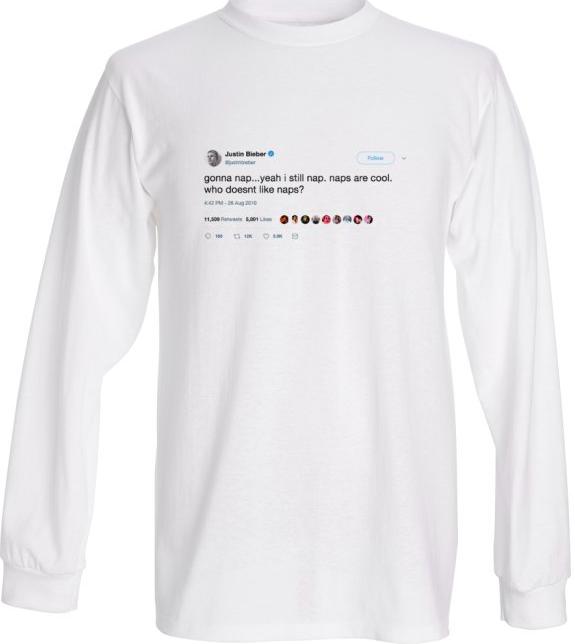 Justin Bieber T-Shirt with Tweet by Wear Your Twuth

Twitter is where influential figures spread their most impactful messages. Wear Your Twuth offers a chance to spread the messages that mean something to you, by wearing them. This movement is combining modern street fashion with being vocal about what matters to you and empowerers you to literally wear it on your chest.

In today’s landscape to stand out you’ve got to wear your feelings on your sleeve, individuals have a unique voice and individual brand they support and live every day. WYT allows you to spread the messages that are important to you and need to be spread. This could range from Donald Trump’s contradicting tweets about Obama now applying to his own presidency to Kanye West giving life advice on “how to not kill yourself”. These tweets are funny, emotional, inspiring and silly, whatever vibe you want to spread to the people around your Wear Your Twuth empowers you to spread that.

WYT is currently stocking tweets from ~20 of twitter's most iconic accounts and adding more everyday. From politicians to celebrities to singers and influencers, inspiration is all around and needs to be spread. These leaders inspire or anger, no matter the side of the discussion you’re on your voice is important. If you’re a fan of Justin Bieber, Niall Horan or more, wear the silly shirts and spread good vibes. If you’re fighting against the current political landscape, wear a contradicting Trump shirt, if you’re on the other side of it, wear a MAGA shirt, if you just want to have fun, wear a tweet about Kim Jong calling our president old when he would never call him short and fat…

With the holidays approaching, a tweet on shirt from Wear Your Twuth is the gift for those who are supporters of anybody from Kylie Jenner to Mason Ramsey to Barack Obama. It’s a great holiday gift for those looking to spread the truth of your individual voice to those around you

The team behind Wear Your Twuth hatched the idea after years of being fans of Twitter. We realized that sometimes a retweet and favorite simply isn’t enough. These messages are more then tweets, they’re ways of life, ways to inspire and lead a fulfilling life. This is more than a t-shirt, it’s a testament to your importance in the world, a testament to what your voice means and what you stand for. Let your voice be heard and Wear your Twuth.

Wear Your Twuth offers t-shirts with tweets on them, from politicians to celebrities, influencers or your tweets, truth is all around, wear it on your chest.

06-25-2018 | Business, Economy, Finances, B …
Fooda
Fooda Brings on Justin Casciola as CFO
Casciola will oversee finance, accounting, financial planning and analysis, tax, internal audit and treasury. He is the company’s first CFO, joining at a time when the company is experiencing rapid growth. Chicago, June 25 2018: Fooda, the leading provider of freshly served restaurant food at work, today announced the company hired Justin Casciola as the company’s first CFO. The executive recruiting engagement was conducted by Lucas Group. “After a thorough
09-24-2013 | IT, New Media & Software
Youth Digital
Justin Richards: Training the Next Generation of Game Development Leadership
Justin Richards, Youth Digital’s founder and CEO, will be speaking on game development and leadership at next month’s Southern Interactive Entertainment and Game Expo (SIEGE) conference. SIEGE is hosted by the Georgia Game Developers Association, and will be held in Atlanta, Georgia, on October 3 - 6, 2013. Justin’s talk on “Training the Next Generation of Game Development Leadership” will be a part of the International Game Developer Association (IGDA)
09-17-2013 | Business, Economy, Finances, B …
Yagoozon, Inc.
CEO Justin Ligeri Named Fastest Growing Online Retailer with Three Year Growth o …
Hypergrowth is a term used to describe an economic BOOM. Today that word is also being used to describe Justin Ligeri's astonishing rise in the online retailing world. In 2010, his fledgling company was broke. Today the three year old company is on track to produce over $20 million in retail sales. Sebring, FL, September 16, 2013 (Straight Line PR) -- When speaking with Justin Ligeri it quickly
01-18-2012 | Advertising, Media Consulting, …
Altitude Marketing
Altitude Marketing Promotes Justin Scheetz to Manager, Web Services
January 17, 2011- Emmaus PA- Altitude Marketing is pleased to announce the promotion of Justin Scheetz to Manager, Web Services. Scheetz is Altitude's former lead designer and developer. His promotion, effective Jan. 13, reflects the fact that his responsibilities have increased in response to the continuing growth of Altitude’s client base. "Justin has been with the company longer than anyone else besides the two founding partners," said Stan Zukowski, Vice President, Creative
11-24-2011 | Business, Economy, Finances, B …
Gailey Associates, Inc.
Justin D. Hodson appointed to Crime Stoppers Board of Directors
Respected Orange County private investigator, Justin D. Hodson, CPI has been appointed to the Board of Directors for the Orange County Crime Stoppers. There are more than 300 Crime Stoppers organizations in the United States and over 1,400 worldwide. This program has proven to be an asset to any community, with over 850,000 arrests made, over 1.2 million crimes cleared, and $8 billion in property and drugs recovered in
09-07-2011 | Business, Economy, Finances, B …
Allen Media Strategies LLC
An Animated Look at the Debt Crisis: Justin Folk Wins $100,000 Power Line Award
Contact: Burke Allen (703) 589-8960 Burke@allenmediastrategies.com America's Debt as Squirrel Allegory When Power Line and the Freedom Club offered a prize for the best creative representation of the debt crisis, Justin Folk and over 200 others jumped right in. Folk's video "Squirrels" -- as it's informally known -- was an instant hit with the panel of judges, which included Hugh Hewitt and Andrew Breitbart, and secured the $100,000 prize. Justin wanted the
Comments about openPR
We publish our press releases on openPR.de because we like people who are "open" - just like us.
Frank Obels, CEO, INCONET - Informationssysteme, Communication und Netzwerkberatung GmbH