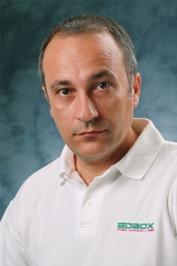 Users in the Middle East can download the beta2 version from ADAOX’s websiteDubai, United Arab Emirates, June 12, 2010: ADAOX Middle East, the regional business development center of ESET NOD32 Antivirus, today announced the availability of the beta 2 version of ESET NOD32 Antivirus 4 for Mac and Linux based systems. With the release of its Beta2 version, ESET is moving forward with another step to the final release of ESET NOD32 Antivirus 4 for Mac OS X and ESET NOD32 Antivirus 4 for Linux desktop. “The Beta1 version of ESET NOD32 Antivirus 4 for Linux and Mac OS X platforms, which was released late last year, was well received by users in the Middle East region. Though machines running on Mac OSX or Linux platforms are not as vulnerable as those that run on Microsoft Windows platform, they may still work as carriers for computer threats, which may infect other Windows based workstations in the network. Hence it is important to secure the system and the beta 2 version of ESET NOD32 Antivirus 4 offers even greater protection and efficiency in detecting known and unknown internet threats,” says Mr. Neo Neophytou, Managing Director, ADAOX Middle East.Compared to Beta 1 version that was released in the end of 2009, this version features: • Product performance optimization • Significant improvement in stability • Lower system footprint • Context menu scanning • Fullscreen mode ensures uninterrupted presentations or aplications by alert-windows • Splash screen and About window • Antivirus configuration improvementsEven though the Mac or Linux platform may not be targeted directly, it can act as a malware carrier and cause serious damage to Windows-based systems in the network. Therefore it is vitally important that every single endpoint user within a network uses an antivirus solution providing this multiplatform protection. ESET NOD32 Antivirus 4 for Mac OS X and ESET NOD32 Antivirus 4 for Linux desktop fulfils this task.The Beta 2 version can be downloaded from http://www.adaox.ae/HomeEdnDownload/About ESETFounded in 1992, ESET is a global provider of security solutions for the home and business segment. The industry leader in proactive malware detection, ESET NOD32 Antivirus holds the world record for the number of Virus Bulletin "VB100 Awards," never to have missed a single “In-the-Wild” worm or virus since the inception of testing in 1998. ESET has headquarters in Bratislava, Slovakia and offices in San Diego, USA; Buenos Aires, Argentina; Prague, Czech Republic, and an extensive partner network in 160 countries. In 2008, ESET has opened a new research center in Krakow, Poland. ESET was named by Deloitte’s Technology Fast 500 as one of the fastest-growing technology companies in the region of Europe, Middle East and Africa.About ADAOX: ADAOX is the regional business development and support center for ESET's range of security products including the award-winning ESET NOD32 and ESET Smart Security. ADAOX, today, is a leading Value Added Distributor which provides IT Security Solutions and Services to customers across the Balkans and the Middle East regions. ADAOX enables customers protect, store and manage their valuable data; and works closely with its Channel Partners to empower them by extending technical expertise, support and training to develop their overall capabilities. With offices in Cyprus, Greece and the United Arab Emirates, ADAOX specializes in value added distribution and support of IT Security Solutions in the areas of Malware Protection, Disaster Recovery, Web Filtering, Internet Bandwidth Optimization, Unified Threat Management, Antispam and Intrusion Detection & Prevention. ADAOX is committed to ensuring customer satisfaction by offering its partners and customers quick response to all their queries and the best prices in the market. For further details, please visit http://www.adaox.comADAOX Middle East G57, Building No. 17, Dubai Internet City P.O Box : 502949, Dubai United Arab Emirates Tel: +971 (4) 3754052 Fax: +971 (4) 4290967