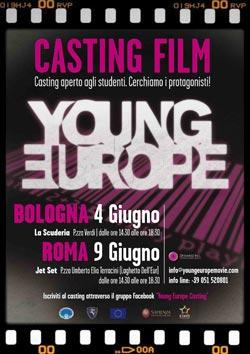 The renowned Showbiz model and hostess agency, specialized in the organization and management of events and shows, is proud to announce the casting to select the actors and actresses that will take part to the making of the movie “Young Europe”, written and directed by the art director Matteo Vicino.The movie will be realized with the support of the European Union and the Italian Government in relation to the Icarus project.The casting will be open to anybody although it is particularly addressed to professional models and new faces at their first experience. People interested in participating the casting can choose between two different locations and dates: the 4th of June in Bologna and the 9th of June in Rome.The casting for "Young Europe" coincide with the release of the homonymous, written by the Showbiz art director Matteo Vicino and published by Aliberti Editore. The book will be available in most of the Italian bookshops from the 4th of June.A great novel for young people, but also suitable to people of all ages, that offers a lot of different interpretations. "Young Europe" has already been described by critics as "the most striking example of a new, revolutionary way of understanding narrative and communication". The novel tells the story of three young European guys, going from Muse to Falcone and Borsellino. A novel we could define unique for its intense emotionality, characterized by a shock ending that will remain impressed in the readers’ memories.For further information on the casting of models and new faces for the making of the movie you can contact Showbiz model and hostess agency on +39 051.520801. Otherwise, you can subscribe directly to participate the casting by sending an e-mail to info@youngeuropemovie.com.Matteo Vicino Showbiz Hostess & Models Agency Bologna www.fashion-nation.com info@showbizmodels.comProfessional press release distribution on the Internet Press-Releases-News.com / Pivari.com fabrizio (at) pivari.comShowbiz Models (a trademark of Fashion Nation Ltd.) is one of the best agencies for the recruitment of hostesses and models, the organization of in-store promotions across Europe and other continents, the recruitment of models for fashion photo shoots and catalogues. Showbiz Models supplies direct services to companies and professionals but it may also subcontract services to other agencies working in this field.Showbiz Inc Via Ugo Bassi, 25 40121 Bologna Italy Tel. +39 051 520801 fax +39 051 5884190

01-28-2019 | Health & Medicine
MAXIMIZE MARKET RESEARCH PVT. LTD.
Synthetic Biology Market – Europe
Synthetic Biology Market Europe is expected to reach USD XX Billion by 2026 from USD XX Billion in 2016 at a CAGR of XX% (Detailed analysis of the market CAGR is provided in the report). Synthetic biology has expanded into various interdisciplinary fields that may be defined as the combination of artificial design and engineering to produce biological systems, chemicals or living organisms. Synthetic biology is also used for improving applications
09-10-2018 | Industry, Real Estate & Constr …
QandQ Market Research
Europe Wooden Doors Market
Europe Wooden Doors Market https://www.qandqmarketresearch.com/reports/wooden-doors-market-78 This report studies the Wooden Doorsmarket status and outlook of Europe and major countries, from angles of players, countries, product types and end industries; this report analyzes the top players in Europe and major countries, and splits the Wooden Doors market by product type and applications/end industries. The global Wooden Doors market is valued at XX million USD in 2018 and is expected to reach XX million
08-08-2018 | Health & Medicine
Data Bridge Market Research
Europe Radiotherapy Market
The Europe Radiotherapy Market research report consists of a primary and secondary research along with an in-depth analysis of the quantitative and qualitative aspects by the expert industry analysts and professionals, leading management bodies, to gain a profound insight of the industry as well as the industry performance. The Europe Radiotherapy Market report presents a lucid picture of the current industry landscape, including the historical and projected market size, based
05-12-2016 | Associations & Organizations
Europe Business Assembly
Europe Business Assembly
The Europe Business Assembly (EBA) is an international corporation for the evolution and implementation of economic and social development. The company was established in April 2000 and its history shows a plethora of promising initiatives, creative growth and professional victories. EBA’s activity demonstrates the capabilities and power of professional partnership. The year 2000 saw the beginning and the foundation of EBA with the signing of the memorandum of cooperation and
10-01-2008 | IT, New Media & Software
TEAM International
Smartsourcing in Eastern Europe
In 2008 the outsourcing business of Eastern Europe was estimated at nearly $2 billion, representing just a tiny fraction of the global IT outsourcing market, estimated at about $386 billion. According to the Gartner Dataquest predictions, in the next four years Eastern Europe is expected to outstrip the rest of the offshore market concentrated mainly in the “classical” locations like India. By 2010 Eastern Europe’s IT outsourcing market share is
03-03-2008 | Energy & Environment
Zensys Inc.
Home Control conquers Europe
European Home Control Summit attracts participation from leading International companies and organizations 29. February 2008 - Copenhagen/Frankfurt - The first European Wireless Home Control Summit on 9 April 2008, taking place parallel to Light + Building, features leading companies such as Merten, Horstmann, Danfoss, and market researcher Parks Associates as well as publicly funded organizations like the Danish Energy Saving Trust (DEST) presenting the newest trends, products and market strategies pertaining
Comments about openPR
We publish our press releases on openPR.de because we like people who are "open" - just like us.
Frank Obels, CEO, INCONET - Informationssysteme, Communication und Netzwerkberatung GmbH