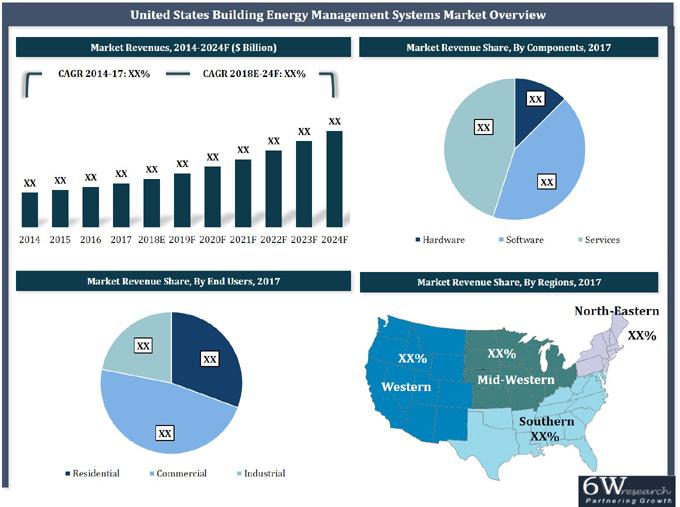 Growing Energy Demand and Rising Concern for Sustainable Development would be the Key Drivers for the Growth of Building Energy Management Systems in the United States - 6Wresearch
Building Energy Management Systems helps in tracking and monitoring the energy usage across several verticals such as commercial, upstream production and residential. The electricity tariffs in the United States for residential, commercial and industrial segments are expected to rise by 8%, 6% and 7%, respectively during 2016-19. Rising electricity bills is expected to drive the demand for building energy management systems in the United States over the coming years.

According to 6Wresearch, United States Building Energy Management Systems market revenues are projected to grow at a CAGR of 12.2% during 2018-24. The government of United States is supporting deployment of energy efficient devices and equipment through several incentives such as Federal Energy Management Program and Corporate Energy Management. According to Residential Energy Consumption Survey, American households consume more electricity during winters. Space heating and cooling are the biggest energy consuming segments in the residential application.

According to Ravi Bhandari, Research Manager, 6Wresearch, "Software segment captured majority of the revenue share in the U.S. building energy management system market followed by services. Several features such as budgets & variance reports, utility bill tracking, real-time metering and collection of energy data usage by various equipment have enhanced their adoption in the market. However, declining cost of hardware devices such as sensors and computer peripherals would impact the revenue share of the segment over the coming years."

"Space heating followed by lighting application dominated the market of building energy management systems. According to EIA, energy consumption for space heating in commercial sector registered an increase of 100% in 2017 as compared to the energy requirement in 2016 and is expected to rise over the next six years," Ravi further added.

According to Akash Jain, Research Analyst, 6Wresearch, "Hardware components such as sensors, actuators and controllers forms the framework of the building energy management system. These hardware components allow remote monitoring, data processing and integration of multi-protocol communication interface in the system. According to EIA, around 1,410 billion KWh electricity was consumed by the residents of the United States, which is expected to touch 1,600 billion KWh by 2040 on account of increasing market penetration of electricity devices that are not covered under efficiency standards and thus would boost the demand for building energy management system in the country.

"The infusion of Internet of Things in building energy management systems and combining it with multiple features in a building equipment such as lighting, security and heating would be a new trend over the coming years," Akash concluded.

"United States Building Energy Management Systems Market (2018-2024)" provides in-depth analysis with 73 figures and 7 tables covered in more than 125 pages. The report estimates and forecast the overall United States Building Energy Management Systems market by components & services, hardware, price end user, applications and regions. The report provides an unbiased and detailed analysis of the on-going trends, opportunities/high growth areas and market drivers which would help the stakeholders to device and align their market strategies according to the current and future market dynamics.

6Wresearch is the premier, one stop market intelligence and advisory center, known for its best in class business research and consulting activity. We provide industry research reports and consulting service across different industries and geographies which provide industry players an in-depth coverage and help them in decision making before investing or enter into a particular geography.

05-22-2019 | IT, New Media & Software
HTF Market Intelligence Consulting Pvt. Ltd.
Wind Energy Technology Market
HTF MI released a new market study on Southeast Asia Wind Energy Technology Market with 100+ market data Tables, Pie Chat, Graphs & Figures spread through Pages and easy to understand detailed analysis. At present, the market is developing its presence. The Research report presents a complete assessment of the Market and contains a future trend, current growth factors, attentive opinions, facts, and industry validated market data. The research study
11-12-2018 | Energy & Environment
Skylight Energy Melbourne
Skylight Energy Melbourne
Skylight Energy is the leading provider of solar energy in Australia. We specialise in high quality yet affordable renewable energy products for either your home or business. Our large selection of products consists of only the finest Tier 1 solar panels, solar inverters and home battery packs. All of our products have been approved by the Clean Energy Council, and certified for safety to the highest Australian and international standards. Whether
06-08-2018 | Energy & Environment
qyreports
Green energy
Green energy is the electricity derived from smooth assets generating minimum pollution and consists of sun photovoltaic, hydropower, wind electricity, bio-fuels and geothermal. expanded investments in era studies and improvement, supportive regulatory frameworks, extended consciousness and electricity security troubles and environmental concerns amongst others are fueling the boom in call for for clean and inexperienced energy. The report on the Global Smart Cards Automated Fare Collection System Market is a thorough
03-01-2017 | Energy & Environment
eSight Energy
Complete Energy Management from eSight Energy
Why choose eSight Energy? You can manage and reduce your energy with the eSight software by importing data into the software and managing your expectations with informative and intuitive graphs and charts. Please view the video here: https://vimeo.com/203430337 eSight Energy provides energy management solutions for use across any type of building or process. With installations across Europe, the US, Middle East and Asia, solutions are provided through a network of resellers
02-01-2011 | Business, Economy, Finances, B …
Breakthrough Energy Solutions
Breakthrough Energy Solutions
RenewAge Energy Solutions, which is based at Los Angeles in California, has just emerged as the fastest growing energy & water efficiency service provider in the country. The energy solutions and energy efficiency California offered by the company are able to reduce the electricity requirements in homes and commercial properties substantially. Because of this, the operating costs on electricity demands can be cut by as much as 30% to 60%.
11-15-2010 | Energy & Environment
Heraeus Noblelight
Plant Optimisation Saves Energy
Can the coating dry more quickly? Is it possible to reduce the rejection rate? Does the plant use too much energy? Many companies ask themselves questions like these. Energy and material costs are important considerations for industrial companies who wish to maintain or improve their competitiveness. At the same time, the optimisation of existing plant can often be the more sensible and cost-effective option over installing new plant. A
Comments about openPR
We publish our press releases on openPR.de because we like people who are "open" - just like us.
Frank Obels, CEO, INCONET - Informationssysteme, Communication und Netzwerkberatung GmbH