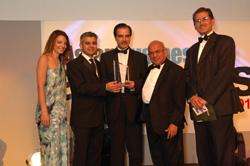 London, UK 6 May 2010: The UK-based Southall Travel does not show any signs of letting up on its marathon award winning spree. The company bagged the prestigious Incredible India Award at the 13th Eastern Eye Annual Asian Business Awards event held in London on 26th March 2010. The accolade which the agency received for being the ‘Favourite Tour Operator to India’ was jointly presented by Rt. Hon. Sadiq Khan (Member Parliament) Minster of State for Transport & Mr. Ramniklal Solanki – CBE, Editor in chief Eastern Eye. The event was attended by over a 700 strong audience.

Southall Travel Bags “Favourite Tour Operator to India” AwardEastern Eye, part of Britain’s largest Asian publishing house has been an iconic brand for more than 20 years and provides an extensive coverage on British - Asian business affairs through an admired weekly newspaper in the UK and a highly popular website. The Conservative Party chief executive, Mr Andrew Feldman, was among the numerous dignitaries adorning this star studded event. Mr Feldman also delivered the grace prior to a lavish four course dinner that absolutely befitted this occasion. This award ceremony saw Southall Travel rubbing shoulders with some of the top Asian business initiatives in the United Kingdom. Perceived to be experts in flights, hotels and packages, this UK travel agent has emerged as a piping hot shopping choice especially for people seeking flights to India.

The award holds further significance in the light of the fact that Southall Travel becomes one of those elite Asian businesses that have shown tremendous potential in the face of a depressed economy. Upon receiving the award, Mr. Shuban Kotwal, General Manager – Tour Operations expressed his high appreciation for strong faith that traveller’s repose in the company. “This award is a remarkable achievement and Southall Travel would like to thank all those who trusted us with their travel needs and our company will remain committed to consistently providing the superior quality travel services”, observed Mr. Kotwal.

On a daily basis, Southall Travel aids approximately 1000 people with their travel itineraries. The website of the company, http://www.southalltravel.co.uk is flooded with travel related information, cheap flights offers for holidays to India and rest of Asia, package deals to some of the most sought after Asian destinations.

Notes to Editors
With its information-packed and user-friendly website, the company in itself is a name to be reckoned with in the UK air travel industry. Under the able tutelage of its Managing Director, Mr. Kuljinder Singh Bahia, who also won the coveted ‘Young Entrepreneur of the Year’ award in the 8th Asian Achiever Awards in London, the company has become synonymous with the term cheap flight to India. Utilising the skills of trained and expert travel consultants. Southall Travel provides round the clock air travel assistance services. The company is all set to expand its resources and boost its service capacity in order to cater to the increasing number of travellers that choose it for their holidays in Asia. With credentials like ABTA membership, IATA certification, and an ATOL license, the firm enjoys great credibility and popularity among travellers.