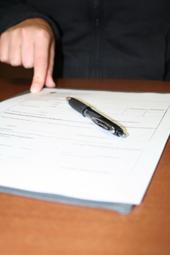 Standardised employment contracts based on the "equal work, equal pay" principle boost motivation. There is a clear increase in performance levels and market efficiency compared to working conditions based on individually negotiated contracts. This important finding was uncovered by scientists from the University of Innsbruck, Austria, as they analysed results from an economic experiment. The project, supported by the Austrian Science Fund (FWF), has attracted great interest in Austria, as it also seems relevant to the type of collective contract that is commonplace there.When it comes to hiring new staff, employers can choose to offer standardised contracts – where equal responsibilities are remunerated on an equal basis – or to negotiate individual contracts. Dr. Martin Kocher, Dr. Wolfgang Luhan and Prof. Matthias Sutter from the Department of Public Finance at Leopold Franzens-University in Innsbruck can now offer some help to those faced with this tricky decision. Their research has proved for the first time that employers draw clear benefits from standardised salaries because, if a market only issues incomplete contracts, employee responsibilities become difficult to pin down. In other words, standardisation does not simply increase salaries, it also generates economic advantages in the shape of better performance and greater market efficiency. MORE PAY, BETTER PERFORMANCE These research results are clearly reflected in the data collected, as Project Manager Prof. Sutter explains: "Our observations revealed that, compared to individual agreements, salaries related to standardised contracts are 30 percent higher. However, performance is also higher in these cases – by 29 percent. Faced with these results, it comes as no surprise that salary standardisation also increases market efficiency by almost a quarter. Standardised contracts, the economic advantages of which have never before been investigated, are now becoming increasingly attractive thanks to these results."The point behind these results seems simple. Employers who wish to financially reward individual employees in the long term must also increase the salaries of all other employees. The salary increase causes everyone to work harder and, as a result, leads to greater market efficiency. This cycle is generated due to the fact that incentives and socially responsible standards play a key role in a market where responsibilities are difficult to specify in contractual form.MISSING SERVICE These results were based on a laboratory experiment involving almost 200 students from various courses at the University of Innsbruck. A "gift exchange game" was used to simulate a market where employers could offer potential employees different contracts.But practical examples are easy to find, especially in the service industry, as Prof. Sutter explains: "Particularly in the university system, employees who essentially have the same job description are remunerated on very different scales. This is due to the rapidly changing employment conditions in the public service sector. As a result, lecturers and professors get different contracts with different salary and pension rights. Our data now suggests that this could have a negative impact on performance."At first sight, the research results would appear to be relevant to the collective contracts that are a traditional part of the Austrian labour market. However, these contracts do not involve employers standardising salaries, but rather trade unions entering into salary negotiations that affect whole occupational groups. As the scope of the laboratory experiment was limited, questions as to its relevance in this area must remain unanswered for the time being. Nevertheless, results from the FWF-supported project have shown that salary standardisation can bring unexpected economic benefits – perhaps even if these are the result of trade union processes. Image and text will be available online from Monday, 20th November 2006, 09.00 a.m. CET onwards: http://www.fwf.ac.at/en/public_relations/press/pv200611-en.html Vienna, 20th November 2006Scientific Contact: Prof. Dr. Matthias Sutter Leopold-Franzens University Innsbruck Department of Public Finance Universitätsstraße 15 / 4 6020 Innsbruck, Austria M +43 / 699 / 888 13 935 E matthias.sutter@uibk.ac.at Austrian Science Fund FWF: Mag. Stefan Bernhardt Haus der Forschung Sensengasse 1 1090 Vienna, Austria T +43 / 1 / 505 67 40 - 8111 E stefan.bernhardt@fwf.ac.atCopy Editing and Distribution: PR&D - Public Relations for Research & Development Campus Vienna Biocenter 2 1030 Vienna, Austria T +43 / 1 / 505 70 44 E contact@prd.at

09-02-2008 | Science & Education
PR&D - Public Relations for Research & Development
BALZAN PRIZES 2008: PRIZE WINNERS TO BE ANNOUNCED ON 8 SEPTEMBER
Vienna, 2 September 2008. The International Balzan Foundation will announce the winners of this year’s prestigious Balzan prizes on 8 September 2008 in Milan. The foundation will be awarding the prizes in honour of exceptional research in Preventive Medicine, the Science of Climate Change, the Visual Arts Since 1700 and Moral Philosophy. The prizes, which are each worth one million Swiss Francs, are to be presented on 21 November in
05-27-2008 | Media & Telecommunications
PR&D - Public Relations for Research & Development
"Wanted - spaceship engine noise" Intelligent sound database developed
St. Poelten, AUSTRIA 26 May 2008 – From 30 May 2008, media producers will be able to access an efficient and easy-to-use new technology that will help them track down the sound effects they need. After two and a half years of development work, the AllThatSounds (ATS) intelligent database for sounds and noises is going online at allthatsounds.net . The database has been designed and developed by a research
12-11-2006 | Health & Medicine
PR&D - Public Relations for Research & Development
EU TEAM DEVELOPS NEW ALZHEIMER'S VACCINE FROM AUSTRIA
A recently approved project of the sixth EU Framework Programme – MimoVax – is focussing on a new target for an Alzheimer's vaccine. The project, coordinated by the Austrian company Affiris GmbH, centres on the use of immune reactions to combat previously overlooked forms of the beta-amyloid that cause Alzheimer's disease. It is being run by seven partner organisations from three countries and has received an exceptionally positive response from
06-29-2006 | Health & Medicine
PR&D - Public Relations for Research & Development
Vienna: The Human Genome on 6 x 4 cm - Symposium on Molecular Diagnostics
The importance of molecular diagnostics for cancer treatment is set to increase significantly in coming years, according to a symposium held yesterday in Vienna. The reason for organising the symposium was the acquisition of a cutting-edge microarray analyser as part of the EU OVCAD (Ovarian Cancer Diagnosis) project. The device provides what is currently the most sensitive technology for analysing the activity of all human genes and therefore enables the

01-15-2021 | Advertising, Media Consulting, …
Ken Research Pvt Ltd
Austria Agriculture Market | Austria Agriculture Industry | Austria Agriculture …
The share of Austria agriculture within the Austrian economy declined steady afterward World War II, agriculture continues to represent a very important part of the economy attributable to its social and political significance. The Chamber of Agriculture rests on an equal level with the chambers of commerce and labour, though its members manufactures solely a fraction of the GDP that industrial and sale able labours produce. Though little, the agricultural sector is
06-08-2017 | Business, Economy, Finances, B …
ReportsWorldwide
Agrochemicals Market in Austria
ReportsWorldwide has announced the addition of a new report title Austria: Agrochemicals: Market Intelligence (2016-2021) to its growing collection of premium market research reports. The report “Austria: Agrochemicals: Market Intelligence (2016-2021)” provides market intelligence on the different market segments, based on type, active ingredient, formulation, crop, and pest. Market size and forecast (2016-2021) has been provided in terms of both, value (000 USD) and volume (000 KG) in the report. A
10-24-2016 | Science & Education
FWF - Austrian Science Fund
Nazi psychology in Austria
The history of academic psychology after the "Anschluss", the annexation of Austria by Germany in 1938, and its role as a discipline used in National Socialist policies is being examined systematically for the first time in a research project supported by the Austrian Science Fund FWF. "It is a sad fact”, says psychologist Gerhard Benetka from the Sigmund Freud University Vienna "that applied psychology flourished during the National Socialist era
09-06-2012 | Industry, Real Estate & Constr …
ESCHA Bauelemente GmbH
ESCHA Bauelemente GmbH extends position in Austria
Halver, 8 August 2012 – In the course of its globalizing strategy, the German connector- and housing specialist ESCHA starts up direct sales abroad for the first time: On 1 July 2012 the company welcomed Andreas Mader as its first Field Salesman in Austria. Operating from the capital Vienna, Mr. Mader will support existing customers as well as extend the business operations. Simultaniously ESCHA will continue to market its products
10-22-2009 | Advertising, Media Consulting, …
Advertising Association Vienna
Creative Austria meets creative Russia
Euroforum: communicatin ready for the next lap Vienna. On 22nd of October 2009 the advertising association Vienna invites again to the annual Euroforum: communication event, platform for European communication, guaranteeing an interesting mix of “connecting businesses and communications”. The Event takes place in Studio 44, Vienna. Focus point Russia (Moscow, St. Petersburg and Sotschi) The main goal of the Euroforum is to promote and establish business relations and synergies between
03-13-2008 | Arts & Culture
University of Vienna
Archaeological Sensation in Austria
Scientists from the University of Vienna unearth the earliest evidence of Jewish inhabitants in Austria Archaeologists from the Institute of Prehistory and Early History of the University of Vienna have found an amulet inscribed with a Jewish prayer in a Roman child's grave dating back to the 3rd century CE at a burial ground in the Austrian town of Halbturn. The 2.2-centimeter-long gold scroll represents the earliest sign of
Comments about openPR
I can't but agree to the positive statements about your portal: easy to use, clear layout, very good search function, and quick editing!
Jens O'Brien, Borgmeier Media Communication