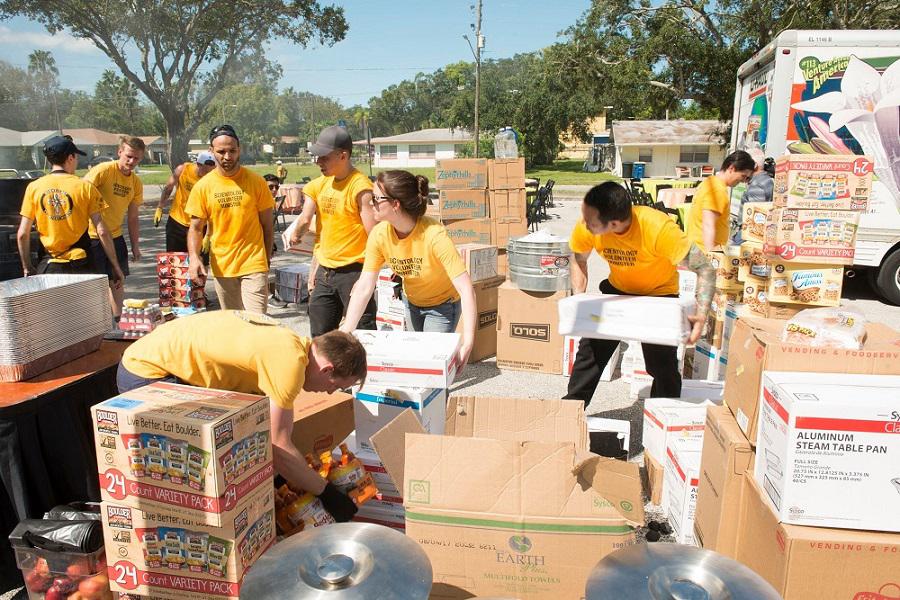 Clearwater, FL – On October 10, more than 50 Tampa Bay area Scientology Volunteer Ministers (VMs) met at their center in downtown Clearwater to see how they could aid disaster relief efforts in the wake of Hurricane Michael.“There are three main areas where volunteers are needed,” said Glendy Goodsell, the Executive Director of the Scientology Volunteer Ministers of Florida. “We are looking for people who can go to the Panhandle and assist on disaster relief, more people to help man a crisis hotline and more to put together hygiene kits for hurricane survivors.”VMs and other volunteer organizations will work in cooperation with local authorities to provide assistance as needed. In earlier disasters, VMs helped clear downed trees, passed out ice and water and provide spiritual assistance in the form of assists. “Assists do not replace medical care,” said Goodsell. “The fact is, after any necessary medical treatment, the individual himself has an enormous capacity to influence the body and its well-being or lack of it. Scientology Assists were developed by L. Ron Hubbard and are actions undertaken to help a person confront physical difficulties.”The VMs were contacted by the Volunteer Organizations Active in Disasters (VOAD) to help man the crisis lines. “When someone needs help after the storm,” explained VOAD Tampa Bay’s Secretary and veteran VM Judy Faegerman, “the hotline provides a place where a person can call and then get help with whatever is needed – removing debris or getting food and water as examples.”The Volunteer Ministers program was created by L. Ron Hubbard in the mid-1970s with the mandate to help “on a volunteer basis by restoring purpose, truth and spiritual values to the lives of others.” Mr. Hubbard further described the Volunteer Minister as a person who “does not shut his eyes to the pain, evil and injustice of existence.” Volunteer Ministers are trained to help others achieve relief from life’s travails and gain new personal strength as well.In carrying out its mission, the global force of Volunteer Ministers has responded to every major disaster worldwide since 2001. The Clearwater and Tampa Bay Volunteer Ministers played a leading role in relief efforts following the World Trade Center tragedy in New York, the South Asian 2004 tsunami, Hurricanes Katrina and Irma and hundreds of other disaster sites. For information about how you can help, please call the VM Center directly at (727) 467-6965.The Volunteer Minister (VM) program was launched more than thirty years ago, in response to an appeal by Scientology Founder L. Ron Hubbard. Volunteer Ministers have trained and partnered with over 1,000 different groups, organizations and agencies around the world, including the Red Cross, National Guard, Army Cadets, Salvation Army, Boy Scouts, Rotary Clubs, civil defense and disaster management agencies, YMCAs, police and fire departments of dozens of cities and towns and hundreds more national and regional groups and organizations.503 Cleveland Street Clearwater, FL 33755

04-09-2020 | Associations & Organizations
Distanced Strong United
Volunteer-based COVID-19 support network - launched!
Strong Distanced United is a volunteer-based COVID-19 support network that just launched to help people connect and get by. We are volunteer-based and are opening various online groups to easy us all through this difficult time. Strong Distanced United https://distancedstrongunited.org/ - Rob Baran Rob B. 6410 S Ryan St Seattle, WA 98178 Strong Distanced United is a volunteer-based COVID-19 support network.
07-31-2017 | Associations & Organizations
Volunteer Firefighter Alliance, Inc.
Volunteer Firefighter Alliance Reaches GuideStar Platinum
Allows Donors to Focus on Progress and Results. Knoxville, TN, USA -- Volunteer Firefighter Alliance (http://www.supportvfa.org) today earned the Platinum GuideStar Nonprofit Profile Seal of Transparency, the highest level of recognition offered by GuideStar, the world's largest source of nonprofit information. By sharing metrics that highlight changes Volunteer Firefighter Alliance is making toward its mission, the organization is helping donors move beyond simplistic ways of nonprofit evaluation like overhead ratios. "In accordance
10-14-2016 | Associations & Organizations
AVI - Adventures and Volunteering in India
We volunteer in India providing ample opportunities for Volunteer in India
India is the land having diversified culture where people of all the religions live together. There are number of beautiful travel destinations in India that attracts number of tourists every year to this beautiful country. Numbers of people who visit India have the desire of volunteering in India so that they can help those who are needy to live a better life. What if you get chance to travel
10-13-2011 | Business, Economy, Finances, B …
Forte Public Relations
THE BUCKINGHAM HONORS STAR OF HOPE VOLUNTEER
Jim Feaster has devoted seven years of his retirement to serving Houston’s homeless population with Star of Hope. Because of his dedicated volunteerism, The Buckingham senior living community is recognizing Jim Feaster as the third recipient of The Buckingham 2011 Salute to Seniors Award. Marilyn Fountain, director of community relations for Star of Hope, nominated Feaster for the honor. “Jim and his wife Marge have assisted with many special projects
05-27-2011 | Associations & Organizations
Forte Public Relations
THE BUCKINGHAM HONORS THE BEACON VOLUNTEER
One local man has spent every Monday for the past three and a half years cooking food and serving the homeless of Houston at The Beacon Day Center. Because of his dedicated volunteerism, The Buckingham senior living community is recognizing George Clouette as the second recipient of The Buckingham 2011 Salute to Seniors Award. Cydney Cameron, community outreach coordinator for The Beacon, nominated Clouette for the honor. “Mr. Clouette has
03-18-2010 | Tourism, Cars, Traffic
Colpitts World Travel
Local Jimmy Fund Volunteer Recognized for Fundraising
Dedham, Mass., March 17, 2010 — More than 150 volunteer tournament organizers were honored by the Jimmy Fund Golf Program during its annual Appreciation Night on Friday, February 5 at The International Golf Club in Bolton, Mass. By organizing golf events, these volunteers helped raise $6.1 million in 2009 for cancer care and research at Dana-Farber Cancer Institute through Jimmy Fund Golf, one of the nation’s largest charity golf programs. Sudbury,
Comments about openPR
9 o'clock: discuss press release with client, 10 o'clock: submit release to openPR, within the briefest possible time release is published and displayed in a prominent place on openPR.de. I am thrilled!
Zehra Spindler, Calypso Now! - Communication Agency