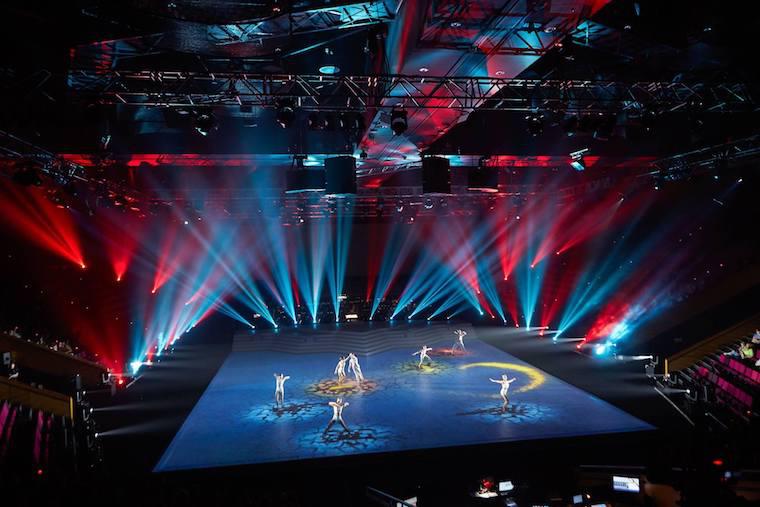 Staged annually for the last 14 years, Queensland, Australia’s Creative Generation (CGEN) event was the biggest yet, with almost 2,000 schoolchildren being given the opportunity to perform in a professional environment on an enormous arena stage measuring 20 metres x 18 metres, with a 38 metre x 6 metre rear projection screen behind it.Content delivery and projection mapping specialists IKONIX – who are based on Australia’s Gold Coast – were asked to help deliver the desired “Wow!” factor for the fifth successive year. At the heart of the solution they created were two Avolites RX8 Ai media servers to deliver images to the rear screen, and two additional units controlling projection onto the stage. Equally central to their vision of the production were Notch real time content generation and BlackTrax real time tracking system, the latter provided by Atlanta-based Visional Productions, and supported by Visional co-founder Kyle Means. IKONIX also supplied Barco 4K resolution, 32,000 lumen projectors.The use of Notch and BlackTrax was particularly important to Zachary Burton, co-founder with Richard Saunders of IKONIX and the operator at CGEN 2018, because it allowed their creativity free reign by enabling the use of on-the-fly and reactive content to complement the AutoBlend and AutoMap blending and warping functionality available with the Avolites Ai software. Challenging and demanding“The specifications for this year’s event were even more challenging and demanding than they had been previously,” recalls Zachary. “Not only did we find ourselves generating over 900 Gigabytes of content with custom content to suit the theme of each piece - but we also supplemented this with Notch generative content, and BlackTrax to track the dancers on-stage.”In total, the CGEN show featured five pieces of Notch content, including particle trails, magic carpets and cracking floors, while up to seven BlackTrax beacons were deployed, tracking the dancers’ X/Y positional data – pushing the limits of what would usually be achievable with the Avolites media server (Avolites specially upgraded the number of beacons supported by Ai from four to eight for the event) especially as content was being generated concurrently. In many similar situations, BlackTrax comes into its own because rehearsal time is always at a premium, so events cannot be choreographed and practiced to the nth degree – but BlackTrax allows for potentially unplanned movement to be seamlessly incorporated into a show, even if it is not expected. For CGEN, however, the IKONIX team had the luxury of appropriate rehearsal time.“Rehearsal time was a key factor in introducing BlackTrax this year,” recollects Zachary. “Some of the more complicated dance pieces required a lot of timing, rehearsals and changes to accurately produce content - and time is something we usually lack, especially during the busy production and load in week. Giving the choreographers and dancers the flexibility to choreograph and dance to a show that tracks them is a big game changer in the way shows like this are produced.”UnusualThat wasn’t, however, the only aspect of the show that was unusual. “A unique point of difference for us on this show was integrating different levels of sync with generative content,” Zachary explains. “We had dancers being tracked on stage as we moved to timecode and to free-run, and we had tracking and generative content jumping between the different levels of sync. This was made possible by the team at Avolites creating Notch timecode sync in Ai.”Once again, BlackTrax enabled unprecedented levels of creativity in a high-profile live event – an advantage Zachary is quick to acknowledge, along with the debt he owes to Kyle Means’s support.“Richard and I met Kyle through our work with different media servers and, especially using Ai on this show, we had a common understanding of what was required,” says Zachary. “Kyle came from the USA to Australia to assist in the programming, integration and operation during the show. He was very knowledgeable about BlackTrax and its integration with media servers, and a big asset to the show’s success.”“And as for BlackTrax,” Zachary concludes, “it allowed us to focus on creating the content and allowed the dancers to focus on dancing – and took nothing away from our creative processes. As the two came together, BlackTrax allowed for seamless integration between the content and the dancing.”Since 1994, CAST has delivered solutions to and for the entertainment production industry and special events and meeting industry. Based in Toronto Canada, we deliver to the world! CAST BlackTrax is the multi-award-winning realtime tracking technology solution that delivers precise streaming 3D & 6D positional data to controllers for targeting the connected automated robotic technologies already used extensively in event and entertainment production, and houses of worship. Using proprietary IR and RF, BlackTrax delivers dynamic streaming positional data with six degrees of freedom (x, y, z, plus roll, pitch & yaw) to 3D & spatial audio, automated lighting, multimedia servers, and robotic cameras – all at the same time, in realtime. BlackTrax is a complete 'tracking solution', which means either CAST or a BTExpert will ensure it is properly designed and installed to deliver optimal results, as well as provide onsite training and ongoing support. www.blacktrax.ca Some Useful Links: Twitter: @CASTSoftware & Instagram & Facebook: @BlackTraxTracking @CASTSoftware Official Hashtag: BlackTraxTracking CAST Forum: http://forum.cast-soft.comCAST BlackTrax 35 Ripley Avenue, Suite 1 Toronto, Ontario Canada M6S 3P2www.blacktrax.ca

10-16-2018 | IT, New Media & Software
BlackTrax
CAST shows wysiwyg R41, launches new BlackTrax, new broadcast capability and glo …
At this year’s LDI show (Las Vegas Convention Center, October 19-21), CAST Group (Booth 2255) will showcase the very well-received release (R41) of its wysiwyg lighting design and previsualisation software in the USA for the first time, as well as providing a spectacular demonstration of what can be achieved with its BlackTrax real time tracking technology. The company will also launch a new global training program. On the booth,
10-08-2018 | IT, New Media & Software
BlackTrax
LDI2018 Panel Session: Shattering The Fourth Wall Through Tracking in Three Dime …
Not to be missed, at the LDI 2018 trade show, Cirque du Soleil will host a free-to-attend panel session in Room N264 on Thursday, 18 October 2018 focusing on Shattering The Fourth Wall Through Tracking in Three Dimensions. The discussion will be chaired and moderated by Peter Thompson, Cirque du Soleil, Technical Manager-Lighting, Multimedia, SFX and will bring together some of the foremost experts who will debate the industry’s hottest and
08-30-2018 | IT, New Media & Software
BlackTrax
BlackTrax helps wow Chinese TV audience
Tencent, the Chinese internet company that owns the WeChat, Weixin and QQ social media platforms, wanted to put on a broadcast spectacular. The music event – which was to be shown on the Guangzhou Broadcasting Network - would combine a broad range of visual images, avant-garde dance, graffiti art, new media technologies, e-sports culture, fashion, rock and roll, hip-hop, ballads, two-dimensional elements, and antique music. With such a complex show,
08-28-2018 | Arts & Culture
BlackTrax
BlackTrax helps introduce new Audi model to the Chinese market
When prestige car maker Audi introduced its revolutionary A8L luxury saloon to the Chinese market, technical service company Redline turned to the BlackTrax real-time motion tracking system to help deliver the “Wow!” factor to the launch show. Each of the cars featured in the show was fitted with ‘BTBeacons’ which transmitted the exact position of the vehicles as they moved around the stage to ‘BTCams’, which then relayed the information

07-27-2020 | Arts & Culture
BookBuzz.net
Author Mark M. Bello Releases New Thriller - Betrayal High
Author Mark M. Bello Releases New Thriller - Betrayal High Attorney and author Mark M. Bello is pleased to announce the release of his new legal thriller, Betrayal High. Released on August 1, 2020 by 8Grand Publications readers are calling the book "Thrilling", "Fantastic", and "Highly recommended.” What does a kid do when it just won’t stop? Kevin Burns has had enough. Today, the bullying stops. Today, he has easy access to
08-15-2018 | Business, Economy, Finances, B …
ATEQ
ATEQ Corp. Welcomes Zachary Massengale
Chattanooga, TN – ATEQ Corp. is proud to announce Zachary Massengale’s new role as Service Technician at the new Chattanooga, TN office. Massengale is responsible for the service and calibration of ATEQ products received from customers. This includes ISO 17025 accredited calibrations and over the phone troubleshooting support with customers. He is also responsible for the shipping and receiving of equipment. “Zach caught on very quickly to how ATEQ instruments
02-03-2012 | Industry, Real Estate & Constr …
Bennat Homes
Bennat Homes Pleased To Partner With Keller-Williams
Marcia Monti & Debbie Sanspree of Keller-Williams Realty recently partnered with Ron Tuttle & Jim Homyak of Bennat Homes to list and sell their new homes located in Zachary Estates & Lake Arthur Estate subdivisions. Ms. Monti has over 25 years of sales and customer service experience and over ten years of management experience. Ms. Sanspree has been in real estate since 1998 and is currently on the Board of
12-10-2011 | Business, Economy, Finances, B …
Redfish Technology
Redfish Technology Places Senior Value Consultant at One of the 2011 “25 Best …
Redfish Technology, nationwide IT and Clean Tech recruiters, is proud to announce another exciting Featured Placement. Zachary Gustafson, has been hired as Senior Value Consultant by our client, a dynamic tech industry leader. A leading provider of core software solutions for property/casualty insurance carriers commissioned Redfish to recruit top business consultants. This company is growing rapidly, earning a reputation as the industry’s benchmark, and was just listed as one of the
02-22-2011 | Industry, Real Estate & Constr …
Bennat Homes
Bennat Homes Announces Groundbreaking on Their Newest Floor Plan at Zachary Esta …
Today Bennat Homes announced groundbreaking on their newest home to be built at Zachary Estates in Crestview, Florida. The home is being built from Bennat Homes newest floor plan; #2501, a four bedroom, four and a half bath layout that includes an upstairs bonus room with a full bath which can be a fifth bedroom or a large playroom or recreation room for family and friends. Other features of this
01-14-2011 | Leisure, Entertainment, Miscel …
Ticketloot Inc
It’s not even a month Elton John welcomed his first son Zachary
It’s not even a month Elton John welcomed his first son Zachary and the concerns started arising if the multi-award winner singer and his civil partner would be able to look after their son in the same way only a mother could do. Zachary was born to John to a surrogate mother on Christmas Day last year and the very first person who raised voice on the welfare of the
Comments about openPR
OpenPR ist the nicest and most clearly laid out PR platform I have seen to this day. The press releases are displayed very nicely and clearly and without any unnecessary frills. The updates are fast and the finished release looks appealing and is clearly legible. Even with 16 years of experience one discovers new things from time to time. Congratulations!
Gabriele Ketterl, Director Marketing & PR, Menads