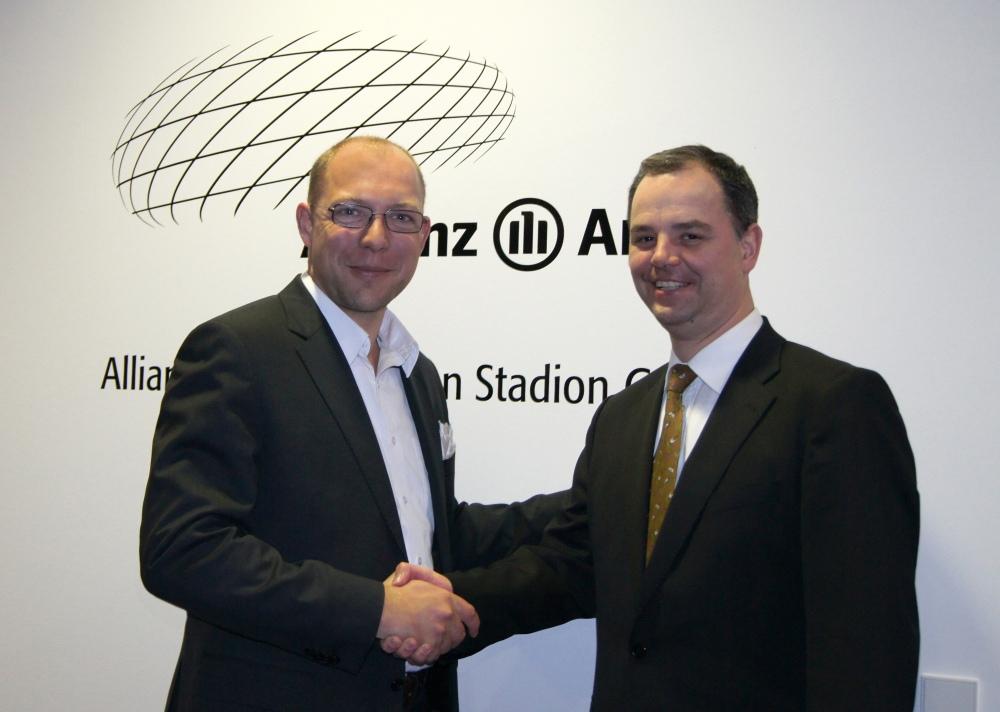 Munich, 31 March 2010. After almost five years of operations and a successful World Cup in 2006, the Allianz Arena is still, in the eyes of many experts, one of the most modern stadiums in Europe and innovative stadium projects ever to be assembled. The arena gained this reputation because of their excellent technical infrastructure and is a leading testament of efficiency and reliability in stadium operation.From the initial construction phase, BTD worked in close cooperation with the operating company Allianz Arena München Stadion GmbH and FC Bayern Munich, to design and advise upon the entire technical infrastructure. During this construction period in 2005, BTD was appointed as the on-site project manager responsible for the implementation of IT features in the stadium and has since, been in charge of all technical operations. Today an agreement has been put in place by the operating company Allianz Arena and Bayern Munich, to extend BTD’s status once again, as their technical service provider for the next five seasons.Stefan Leibhard, Managing Director of BTD stated: "We work in a lot of leading stadium projects for World Cups, Olympics and other major events. A project to which we are always addressed and which we are particularly proud of however, is the Allianz Arena in Munich. The Allianz Arena was our first stadium project where we were technically responsible for, from the beginning until the end, and now after five very successful years of operation, we look at the Allianz Arena as our "Home- Base." We are very delighted to receive full confidence of the operating company and FC Bayern Munich for the next five years again."Juergen Muth, CEO of Allianz Arena München Stadion GmbH said: "Although we have always appreciated what we had with BTD’s in regards to their staff and wealth of experience in international projects, we thoroughly scanned the market before confirming BTD once again as our primary supplier for the next operational phase. We are more than pleased today, to confirm our further cooperation. We believe they are the ideal service provider to deliver a consistently high level of performance over the next five years for us. " You may view a link of the Allianz Arena under http://www.allianz-arena.de/en/About the BTD Group: The BTD Group was founded in 1997 by Stefan Leibhard and Kersten Kröhl in cooperation with BTD Telekommunikation GmbH. Three additional companies, BTD Newmedia, BTD Service and BTD System followed, each devoted to new media, mobile communications and IT-services, respectively. As the official IT-services provider for the Munich Allianz Arena, the company was responsible for the entire technical conception and project management even before the first screw was turned. It is also active as a full-service web agency for arenas and sport providers. Since April 2008, the newly founded BTD International Consulting AG have been responsible for modernizing and constructing unique venues at sport clubs, leagues, associations, organizers as well as the operators of stadia and arenas. The company currently consists of over 120 employees in its various business sectors and is fully self-financed by its shareholders. See: http://www.btd.de/btd-gruppe/en/Michael Fritsch, BTD Newmedia GmbH E-Mail : Michael.Fritsch@btd.de Telefon : +49 (0)89 660291-0 Fax : +49 (0)89 660291-19 Goethestr. 34 80336 München Germany

04-27-2010 | Sports
BTD Group
E-Business: Werder and BTD collaborate
Munich, 21. April 2010. Werder Bremen will alter their E-business into a new direction with their new partnership with the BTD Group. As a part of the stadium renovations, the “green & white“ will alter and upgrade their technical infrastructure in the upcoming months. For the Weser Stadium, new state-of-the-art electronic systems will be designed and implemented and the online presence of the club will be enhanced with features such as
09-04-2009 | Sports
BTD Group
BTD audits the most modern stadium in South America
Guadalajara / Zurich / Munich, August 28th, 2009. BTD International Consulting AG audits the new construction of the stadium of Chivas – Guadalajara, Mexico. In Guadalajara, Mexico, a new multi functional arena is planned to be build, where home matches of “Chivas” as well as other events and congresses will take place. The opening is scheduled for June 2010 and the stadium is expected to have a capacity of 50.000
07-09-2009 | Sports
BTD Group
Bundesliga expert ignites the BTD Group
Munich / Zurich, July 8th, 2009. BTD have added the experience from the German Bundesliga to their management board – Bernd Ingerling’s arrival is a timely boost for the innovative service provider. The ever expanding BTD Group have been able to secure several high profile international projects in recent months and recently added to their management board with the notable signing of Bernd Ingerling from 1860 Munich. The BTD Group is
04-28-2008 | IT, New Media & Software
BTD Group
BTD International Consulting AG launch
Zurich, 25th of April 2008. In future, the BTD Group’s international clients will be served by BTD International Consulting AG. Located in Zurich, the newly founded company advises sports clubs, leagues, associations, organisers and operators of stadia & arenas, in the construction and modernisation of event venues. BTD International Consulting AG primarily benefits in this respect from the experience gained in the construction and operation of the Munich Allianz Arena. A