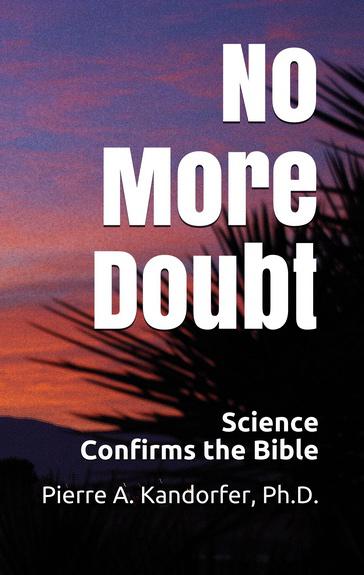 - Pierre Kandorfer describes the biggest fraud in human history and sets the record straight - The latest book by Pierre A. Kandorfer delivers the latest proof that science confirms the accuracy of the Bible. Our secular society wants to make us believe that the Bible represents only an irreconcilable conflict between “science vs. religion”. This atheist worldview is suggesting a dispute between scientific facts versus a religious belief system. Nothing can be further from the truth, and scientific facts can prove it.Incidentally, the proof of Bible’s historical correctness is by far no more a scientific problem. This question has been decisively answered decades ago. What remains, is only the interpretation of scientific facts, depending on people’s worldview.It is true that the Bible is not a “science book”. At the same time, we are not aware of any evidence that the Bible contradicts the science. Actually, just the opposite. The book assembles all the facts we must know. The book documents hundreds of scientific facts the Bible mentioned already thousands of years ago. Pierre A. Kandorfer compares these facts with the “evolution theory” by Charles Darwin, which many scientists now call a hoax and a complete fraud. Don’t be fooled! This book will finally set the record straight.The paperback is available at Amazon and other book sellers and costs only $9.95. An eBook version is also available at just $2.95.Pierre Kandorfer is a veteran journalist with thirty-five years of media background. Being half French, half Austrian, he grew up in the middle of Europe and has written a series of books and thousands of articles. Pierre Kandorfer has a Ph.D., used to be President and Dir. Of Programming of EuroChannel Broadcasting, speaks several languages, taught Communications at a college in Europe, and is considered a media analyst with special focus on media, society and politics.Pierre A. Kandorfer, Ph.D. California City, CA 93505 760 980 0769

04-09-2018 | Politics, Law & Society
SkyPress Media
“Fight Back Manual” explains how to defend our traditional values, freedoms, …
New book instructs how to survive the collapse of our civilization California City, CA. The latest book by Pierre A. Kandorfer offers an easy-to-follow manual: What can I contribute to fight the culture war, save our traditional values, freedoms, and the Western civilization? This is less a book to read than a manual to follow. Our world appears to be totally upside down. We can’t get rid of the impression that “everything