Beer of the Year Announced For 2018 USA Beer Ratings Competition 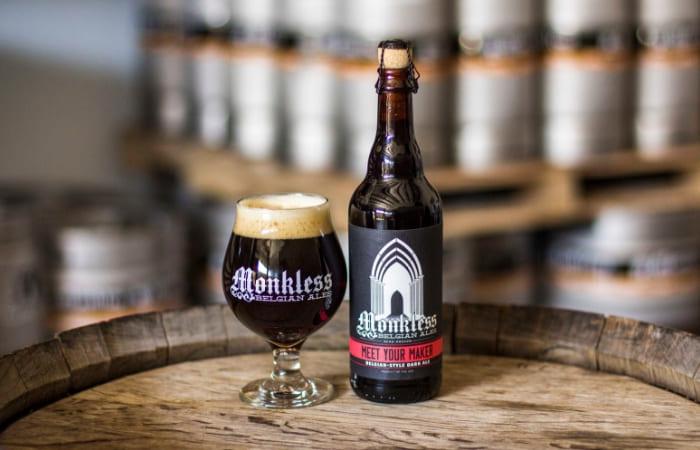 Meet Your Maker from Monkless Belgian Ales of Oregon Wins Beer of the YearAfter two days of judging beers from around the world, the inaugural USA Beer Ratings competition has revealed its 2018 “Beer of the Year” – Meet Your Maker from Monkless Belgian Ales. This beer was a huge hit with competition judges, who gave it among the highest marks possible for quality, value and packaging, the three judging criteria used to rank and evaluate the beers at the San Francisco event. In addition, Monkless Belgian Ales won “Brewery of the Year.”Meet Your Maker is made by Monkless Belgian Ales in Bend, Oregon. The company specializes in classic Belgian-style ales that are crafted to be accessible, refined and smooth. The head brewmaster at Monkless Belgian Ales is Todd Clement. The company prides itself on its patient, dedicated brewing process that is based on traditional brewing methods originally developed by monks in Europe.The USA Beer Ratings competition was launched in late 2017 by Beverage Trade Network, which organizes beer industry events all over the world. The goal of this event was to judge beers the way consumers judge them. In contrast to other beer competitions, where brewing ability and technical expertise sometimes receive primary consideration at the expense of drinkability, the goal of the USA Beer Ratings competition was to award and celebrate the beers that consumers actually want to buy, whether at a retail liquor store or ordering off the menu at a restaurant.Chief executive of Beverage Trade Network Sid Patel said, “At all the major competitions, beers are judged solely on the quality of what’s in the bottle. We wanted to take a different approach, by asking our judges to look at beers the way beer drinkers do, adding appearance and value for money into the mix.”“The judges were impressed by every aspect of the entry from Monkless Belgian Ales, and especially the overall quality of the beer itself,” said Patel.Based on the initial success of this year’s USA Beer Ratings Competition, Beverage Trade Network plans to run the competition again in July 2019. The USA Beer Ratings Competition was the first of several events that Beverage Trade Network will be hosting over the next 18 months as part of a global drinks initiative to introduce beer drinkers to innovative and value-oriented beers from all over the world.Beverage Trade Network (BTN) is a global media and B2B networking platform servicing suppliers, buyers and beverage professionals in the global beverage industry. BTN also owns BevRoute, a magazine for importers and distributors, and runs a lineup of trade shows around the world, including the USA Trade Tasting in New York, IBWSS UK in London, IBWSS USA in San Francisco, and the ABID Conference in the U.S. Beverage Trade Network also owns and runs the London Wine Competition, London Beer Competition and London Spirits Competition.For more about Beverage Trade Network: www.BeverageTradeNetwork.com255 South Airport Boulevard South, San Francisco, California

07-03-2018 | Business, Economy, Finances, B …
Bonafide Research & Market Pvt. Ltd.
‘India Beer Market Outlook, 2023’
What is the best substitute to whiskey & wine which leaves you highand burns a hole in your pocket? Maybe Beer:Bonafide research The price of whisky,wine and other alcoholic beverages is increasing since a long time and are expected to further increase owing to rising inflation and changing in government rules and policies. while Beer only seems to be the best drink which comeseasy in the pockets of Indian consumers. Beer is
08-17-2017 | Business, Economy, Finances, B …
Orbis Research
Beer Market in South Korea
Summary This report helps to analyze competitive developments such as joint ventures, strategic alliances, mergers and acquisitions, new product developments, and research and developments in the Beer in South Korea Description The social and political environment significantly influenced sales of beer in 2016, with increasing numbers of consumers drinking alone, and the implications of the anti-bribery law. The former helped to fuel growing sales of global beer brands in convenience stores, whilst the
06-13-2017 | Leisure, Entertainment, Miscel …
Cool Shit in SA
International Beer Day Music Festival
For Immediate Release: How much do South African’s love beer? A LOT!!! So, we bring you the first ever International Beer Day Music Festival held right here on South African soil. International Beer Day Music Festival, will be happening on Saturday 5 August 2017, at the beautiful Cradle Moon Lakeside Game Lodge. The best local and loved breweries from around the country. Festival goers will get to taste hops from Darling Brew, The
06-02-2017 | Business, Economy, Finances, B …
Food and Beverages Industry - MRH
Global & India's Beer Market Study Supports Strong Demand for Beer
Beer is globally the third most popular drink after water and tea. Growing at a CAGR of 2.4%, it is projected that the global beer market will reach approximately USD 636 billion by 2020. In 2015, the global beer market was valued at USD 566.6 billion. While in 2014 the global beer market grew by 1%, it grew approximately by 2% in 2015. The low growth percentage is due to
11-02-2016 | Fashion, Lifestyle, Trends
Beer Selfie
Beer Selfie Craft Beer Gift Guide
BeerSelfie.com has published a Craft Beer Holiday Gift Guide for all of us that are shopping for the beer enthusiast in our life. Craft beer and homebrewing have exploded across the country and BeerSelfie.com has the inside track on the latest gear just in time for the holidays. With the help of BeerSelfie.com you’ll find beer clubs that deliver beers you can’t get anywhere else, fun crafts to express your beer
09-07-2016 | IT, New Media & Software
Digital Press
Ultras - Beer & Brawls, the game
The first videogame based on real ultras in the world By Digital Press September 1 2016 Tuscany, Italy - Ultras, need we say more? Take control of your fellow die-hard supporters, create your own group, energize your ultra leaders and get ready to fight against other real players. Create your own ultras, get on the coach, hold the belt in your fist and defend your sector. About the game In Ultras - Beer & brawls,
Comments about openPR
I can't but agree to the positive statements about your portal: easy to use, clear layout, very good search function, and quick editing!
Jens O'Brien, Borgmeier Media Communication