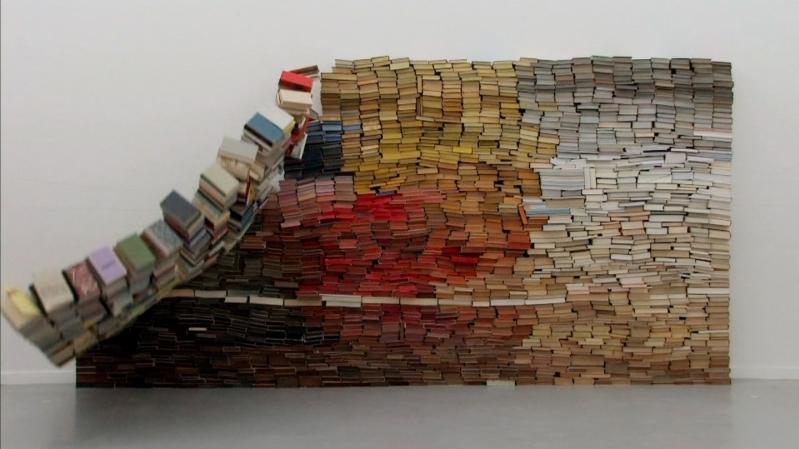 From 12 March to 1 May 2010 Galerie Adler is putting on its first show of works by the Berlin-based artist ANOUK KRUITHOF (*1981, Dordrecht, Netherlands). The exhibition BECOMING BLUE was already shown in 2009 at Het Domein Museum in Sittard, NL, and at Künstlerhaus Bethanien in Berlin.
The people in Anouk Kruithof’s photographs have a vulnerable look, perhaps due most to their expressive faces, which tellingly lay bare their emotional state of mind. Dressed in blue and posed before a background of the same colour, they have difficulties asserting themselves, seeming almost to dissolve into the blueness that surrounds them.
But what is most disturbing about the images is how Kruithof waits to press the shutter until a moment when her subjects have no conscious control over their facial expression, gestures or posture. We see them in that brief space of time when their body reacts without the conscious influence of the mind – a situation that renders them defenceless and helpless.
These “in-between momentary emotional states”, as the artist refers to the effect she is trying to achieve, drastically reveal how easily the facade we normally guard so carefully can be breached. Kruithof brings about this loss of control by deliberate feints. The “snapshots” she uses to capture the sensibilities of her sitter constitute a documentation of exceptional human emotional states.
In some of the portraits in BECOMING BLUE, Kruithof turns on its head the positive aspect of the colour blue, which is in general associated with calm and relaxation. She emphasizes instead the moment conveyed by the expression “out of the blue”: the instant in time when a situation suddenly changes and we don’t know what will happen next. The artist deliberately creates situations in which her protagonists are abruptly startled, in order to capture this precise split second on film. Even when she shows people in more relaxed states of mind, however, she has a way of pinpointing the moment of deepest reverie, when the subject forgets to monitor what he looks like and to control his facial expression and pose.
As the viewer contemplates the carefully installed set of works in BECOMING BLUE, ostensibly uninvolved in the scenes portrayed, the tables are turned and he, too, is put at risk of losing control. Alongside the portraits, he finds himself confronted with a wall of 4,000 books, complemented by a video projection of a similar book wall. The sameness of the blue-on-blue photographs juxtaposed with the colourful and structurally inhomogeneous book barrier generate an atmosphere that oscillates between static tranquillity and hidden dynamics.
An arc of tension emerges: the visitor feels a nagging sense of uncertainty and lack of orientation, which however gives way to a vague feeling of security when nothing untoward happens for a while. Just as the tension is waning, however, a loud bang rings out and the projected wall of books tumbles down. The shock at the sudden noise turns the viewer – without him being able to stop it – into an equivalent of the people in the photos.
BECOMING BLUE builds a fascinating interplay of spatial, pictorial, installational and conceptual components whose impact is at once irritating and arresting. Anouk Kruithof takes a very active role here, setting the scene, documenting what happens, and in some cases appearing as a ghostly apparition in the pictures. But above all, she acts as stage director of our existential mental states.

Galerie Adler is focusing on new and fresh international talents with a unique handwriting going along with strong and challenging themes.

The artists reflect the self-image, the desires and dreams of human beings in today's society. They explore topics like youth culture, social conflicts, life and death, faith and despair as well as angst, loneliness, violence and other kinds of human abysses. Their work can be described as morbid, provocative, bizarre but also as ironic, mystic and grotesque. They provide a link between drama and humour.

Our program covers all media: paintings, drawings, photographs and especially videos and performances.

03-07-2011 | Arts & Culture
Galerie ADLER
First gallery show by Emeli Theander: Gastkramad @ Galerie ADLER Frankfurt
Emeli Theander Gastkramad March 19 – April 30, 2011 OPENING RECEPTION Friday, March 18th 2011, 7 pm Galerie ADLER is presenting the young Berlin artist Emeli Theander (*1984 Göteborg, Sweden) in her first gallery exhibition! The painter and street artist Emeli Theander continues to follow traces of outsiders and freaks, diving into worlds inhabited by ghosts. What connects these figures is their existence at the margins of modern imagination For this first solo show Emeli Theander
01-14-2011 | Arts & Culture
Galerie ADLER
Susanna Majuri - Nordic water tales
OPENING RECEPTION Friday, January 21st, 2011, 7 pm ADLER - FRANKFURT AM MAIN January 22nd – March 5th, 2011 “I want to show that one can find the fantastic from nearby. Fiction blends into our life. The imaginary is in fact actual.” Stories are a wonderful thing! You can lose yourselves in them, assume a different form or personality – and yet, in every fairy tale there is a grain of truth. Finnish photo
07-22-2010 | Arts & Culture
Galerie ADLER
Artists Anonymous: everything is possible - everything is done
ARTISTS ANONYMOUS everything is possible – everything is done September 4th – October 23rd, 2010 OPENING RECEPTION Friday, September 3rd, 2010, 6 pm From September 4th until October 23rd Galerie Adler shows ARTISTS ANONYMOUS: „Everything is possible – everything is done“. Anything is possible – but in contemporary art there is actually very rarely anything “new”, anything that really challenges our powers of perception and our mind. We’re talking about works that make us a little dizzy
01-12-2010 | Arts & Culture
Galerie ADLER
Gregor Gaida - Sum of Stories @ Galerie ADLER, Frankfurt am Main
GREGOR GAIDA - Sum of Stories Opening: Friday, January 15, 2010, 7 pm Exhibition: January 16 – March 6, 2010 „The result of my work is a translation of reality. With it, the spatial object is put into relation while the sum of perceptions reflects the ambiguity of reality.” Quantum physics postulates that a particle can follow every possible path in space-time on its way from one place to another and thus live

07-18-2011 | Arts & Culture
PHOTO+ART BOOK HAMBURG
Premiere of the Photo+Art Book Hamburg'11
From 2nd to 4th of September 2011, 70 national and international exhibitors will attend the premiere of the Photo+Art Book Hamburg'11 at the House of Photography, Deichtorhallen Hamburg (Germany). July 17th 2011 - Hamburg (Germany) – The Photo+Art Book Hamburg’11 will be focusing on the printed medium as an artistic platform. The creative fair is not only a forum for well-known publishing houses but also invites visitors to discover young
Comments about openPR
Your portal is fast, simple, and easy to use. Others may have more functions but they also demand more editing time, you have to preformat the text in order to achieve a good result etc. I think openPR is really fantastic!
Andreas Knepper, wallmedien AG