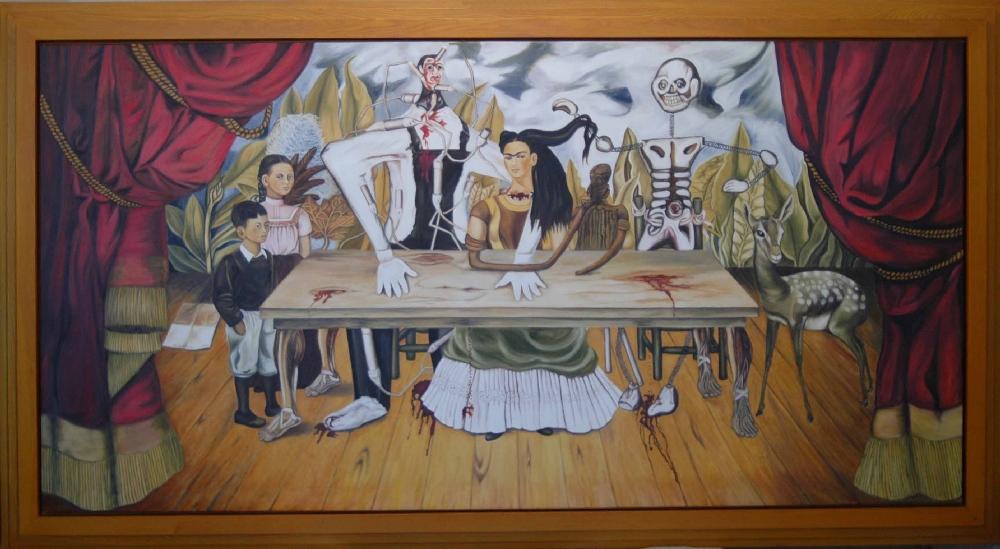 Exceptional event in the world of art: Frida Kahlo’s “The wounded Table” (“La Mesa Herida”) now replicated and in exhibition from February 27th to June 30th 2010. One of the things that make artists great is the extraordinary ability they have to search themselves. The best believe they will find a way to define their identity, to express their interior world, to create unsurpassable imaginative artworks. No one has defined that search for his own identity more clearly in contemporary art than Frida Kahlo, who has reached world resonance since 1980’s. On February 26 2010, the founders of the Kunstmuseum Gehrke-Remund in Baden-Baden, Hans-Juergen Gehrke and Dr. Mariella Remund will present to the press probably the most significant work of Frida Kahlo, in the search of her own identity: “The Wounded Table” (“La Mesa Herida”), 1940, oil on canvas, location unknown.Mr. Gehrke and Dr Remund describe the painting as: “the biggest self portrait of Frida Kahlo” not only for its size, 122 x 244 cm , but because every one of the seven Figures and Objects painted represent one aspect of the complex personality of the Mexican Artist.The story of “The Wounded Table” is as mysterious and fascinating as the artist who painted it. Frida Kahlo worked on it during the end of 1939 and the first weeks of 1940 at the time of her divorce from Diego Rivera. “The Wounded Table” was shown for the first time in January 1940 in Mexico City for the Exhibition of International Surrealism, consequently it was exhibited in USA and Europe. It went lost in 1955, seven months after Frida Kahlo’s death, on its way to an exhibition in Moscow, since then the paintings is considered lost.The Kunstmuseum Gehrke-Remund is worldwide the only license holder of the right to replicate all the paintings of Frida Kahlo. The license has been granted by the copyright holders of Frida Kahlo’s works: the country of Mexico, represented by © Banco de México Diego Rivera & Frida Kahlo Museums Trust / VG Bild-Kunst, Bonn 2008.To date there is no exhaustive interpretation of “The Wounded Table”, in order to replicate it, Mr Gehrke and Dr. Remund have researched for years in seven languages, and have given a totally new and comprehensive interpretation of the painting. “The Wounded Table” will be shown for the first time to the public on February 27 in occasion of the first anniversary of the opening of the Museum, it will remain in exhibition till June 30 2010.With over 111 oil paintings (licensed replicas from: © Banco de México Diego Rivera & Frida Kahlo Museums Trust / VG Bild-Kunst, Bonn 2008) in the exhibition, the Kustmuseum Gehrke-Remund in Baden-Baden shows the most complete collection of Frida Kahlo paintings worldwide.The Kunstmuseum Gehrke-Remund is a privately owned art museum founded in 2009 and dedicated to showing monographic works. The Kunstmuseum exihibits only the works of Frida Kahlo. The objective of the Kunstmuseum Gehrke-Remund is to offer the visitors a complete view of the entire work of the Mexican artist, allowing in this way to follow the artist’s development, to discover the different phases she goes through in her life: from the very early works to her maturity. The Vision of the Kunstmuseum Gehrke-Remund is to offer the visitors a unique cultural experience that covers all the senses, and an environment that touches not only the eyes of the visitors, but their minds, and above all their hearts. Every decision made in the creation of the museum was driven by two elements: respect for the visitors and respect for the artists.In addition to exhibiting the artworks, the Kunstmuseum Gehrke-Remund shows the environment of Frida Kahlo’s the life: Tehuana blouses, jewelry, and the entire context in which the artist lived and produced her paintings. This 360°view of Kahlo’s llife and work allows the visitors to totally immerse themselves into the artworks and to better understand the artist. The founders of the Art Museum are Hans-Jürgen Gehrke and Dr. Mariella C. Remund. Both are art patrons, collectors, and passionate art historians. They have spent over 25 years in executive positions in multinational corporations and academic organizations in Germany, Italy, France, Switzerland, USA, Spain, South America and China.Kunstmuseum Gehrke-Remund GmbH Industriestrasse 9a 76532 Baden-Baden, Germany Tel #: +49 7221 97 11899 Presscontact Person: Dr. Mariella C. RemundKunstmuseum Gehrke-Remund GmbH Industriestrasse 9a 76532 Baden-Baden, Germany Tel #: +49 7221 97 11899 Presscontact Person: Dr. Mariella C. Remund

You can edit or delete your press release The biggest self-portrait of Frida Kahlo: “The wounded Table” (“La Mesa Herida”) now in Kunstmuseum Gehrke-Remund, Baden-Baden here