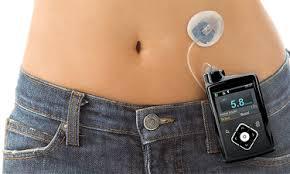 Insulin pump is a portable device attached to the body that continuously delivers preset amounts of short or rapid acting insulin in the body to control diabetes. Insulin therapy is required in type 1 diabetes and sometime in type 2 diabetes. It serves as an effective alternative to insulin injections. Furthermore, insulin pump delivers the insulin according to the need of body as basal rate, where small amount of insulin is delivered continuously whole day for maintaining normal function of body that is programmed by health care professionals and as bolus dose, which is the additional dose of insulin required according to the food supply to correct the blood sugar level of the body. Insulin pump consists of main pump unit that holds insulin reservoir i.e. 176-300 units of insulin. There are various types of insulin used to treat diabetes that includes rapid, short, intermediate and long acting insulin.Request a Sample Copy: https://bit.ly/2M3CJt2The essential factors driving the growth of this market is diabetes, awareness of diabetes, type of insulin and different methods to deliver insulin. Insulin pump device are small and durable. Insulin pumps are user friendly, as they can be programmed easily and LCD screen is available for display of programs. Battery compartment and reservoir compartment is also compact. Insulin pump provides more flexibility to lifestyle as it is highly portable. Number of injection are also reduced due insulin pumps. Whereas there is precise delivery of insulin to gain better control on diabetes.Insulin pump market taxonomyProduct TypeTraditional insulin pumps Disposable insulin pumps Smart pumps End UsersHospital Clinics Home Care Laboratories Rising number of diabetes to fuel the growth of insulin pump market in the near future:According to Lancet study 2016, there was four fold increase in number of diabetes 108 million in 1980 to 422 million in 2014 and half of them live in India, China, U.S., Brazil, and Indonesia. Rise in number of diabetic patient globally is expected to favor growth of the insulin pump market in the near future. There are two types of diabetes type 1 and type 2. In type 1 diabetes, immune systems destroys the cells in pancreas called as beta cells which are responsible for insulin production. So externally manufactured insulin needs to be provided by insulin pump to recover a person from diabetes which in turn is expected to favor the insulin pump market in the near future. In type 2 diabetes body does not use insulin properly it is also called as insulin resistance. So type 2 diabetes patient need to take multiple shots of insulin which is provided by insulin pump as it is designed to deliver continuous amount of insulin 24 hrs. According to findings of various studies in 2015, insulin pump is a safe and valuable treatment option for diabetes. Other advantage of the insulin pump is that it frees you from having to measure insulin into a syringe. According to WHO the number of people with diabetes has risen from 108 million in 1980 to 422 million in 2014. Which is further projects to favor growth of the insulin pump market in the near future. The above reasons are projected to provide significant traction in the growth of insulin pump market over the forecast period.Diabetes prevalence has been rising more rapidly in middle- and low-income countries that is expected to support the growth in insulin pumps marketThe International Diabetes Federation estimated that 8.3% (382 million) of adults globally had diabetes in 2013 and that the prevalence vary across different countries. According to American diabetes Association age- and sex-adjusted diabetes prevalence were highest in the poorer countries and lowest in the wealthiest countries. LIC (Bangladesh, India, Pakistan, and Zimbabwe) 14.0%, LMIC (China, Colombia, and Iran, Palestine) 10.1%, UMIC (Argentina, Brazil, Chile, Malaysia, Poland, South Africa, and Turkey) 10.9%, and HIC (Canada, Sweden, and the United Arab Emirates) 5.6% Differences between countries may be the because of differences in the distributions of risk factors among countries, such as family history of diabetes, age, obesity, socioeconomic status, birth weight, ethnicity, and the degree of westernization. This augments growth of the insulin pump market more in middle- and low-income countries.Else place an Inquire before Purchase “Global Insulin pump Market Size, Status and Forecast 2022: https://bit.ly/2CqjmL1Major acquisitions to support growth of insulin pump market.Medtronic Integrated performance report sales increased from US$15,000 in 20212 to US$ 30,000 in 2016. Key players operating in insulin pump market include Medtronics, Braun Melsungen Abbott Laboratories, Becton, Dickinson and Company, Sanofi, Insulet Corporation, and Hoffmann-La Roche AG.Worldwide Market Reports is your one-stop repository of detailed and in-depth market research reports compiled by an extensive list of publishers from across the globe. We offer reports across virtually all domains and an exhaustive list of sub-domains under the sun. The in-depth market analysis by some of the most vastly experienced analysts provide our diverse range of clients from across all industries with vital decision making insights to plan and align their market strategies in line with current market trends. Worldwide Market Research’s well-researched inputs that encompass domains ranging from IT to healthcare enable our prized clients to capitalize upon key growth opportunities and shield against credible threats prevalent in the market in the current scenario and those expected in the near future.Mr. Shah Worldwide Market Reports Tel: +1 415 871 0703 Email: sales@worldwidemarketreports.com Visit our news Website: https://www.coherentwire.com