Rotary Clubs Light Up the World to End Polio 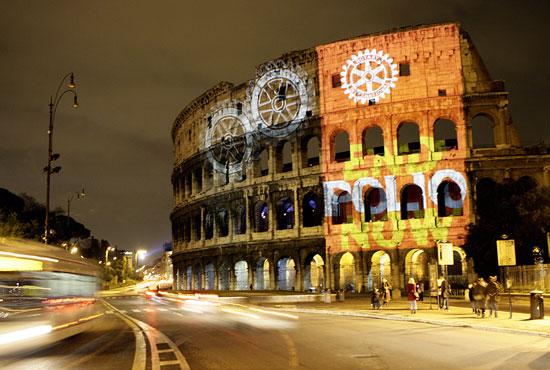 Roman Colosseum Illuminated with the EndPolioNow Message in February 2009

EVANSTON, Ill. U.S.A. (Feb. 22, 2010) -- What do the Egyptian Pyramid of Khafre, Buenos Aires’ Obelisk, and Chicago’s Wrigley Building have in common?

Each of these iconic landmarks will provide a dramatic backdrop for an equally dramatic message: End Polio Now. Those three words – representing Rotary’s pledge to rid the world of this crippling childhood disease -- will be projected onto each structure during the week surrounding Feb. 23, the humanitarian service organization’s 105th anniversary.

“By lighting these historic landmarks with Rotary’s pledge to end polio, Rotary is saying to the world that we will fight this disease to the end,” says Glenn E. Estess, Sr., chair of The Rotary Foundation, which oversees Rotary’s polio eradication program. “People around the world will see these words and join Rotary and its partners in the historic effort to eradicate polio from the face of the earth.”

The End Polio Now illumination of the pyramid is particularly symbolic because Egypt’s history spans humanity’s struggle with the disease. Ancient Egyptian artwork carried the earliest known depictions of people disabled by polio; and in 2006, Egypt, along with Niger, became the most recent country to be declared polio-free, leaving only four polio-endemic countries: Afghanistan, India, Nigeria and Pakistan.

In addition to the Egyptian Pyramid of Khafre, other sites scheduled for illumination the week of Feb. 23 include the Taipei Arena, Taiwan; the Cathedral of Santiago de Compostela in Galicia, Spain; the Old Port Captain’s Office on the V&A Waterfront in Cape Town, South Africa, with world-famous Table Mountain as the backdrop; the Obelisk of Buenos Aires, Argentina; the Lake Marathon Dam overlooking the historic Marathon Memorial Battlefield in Greece; the Royal Palace of Caserta in Italy; and in the city where Rotary was founded 105 years ago, Chicago’s famous Wrigley Building.

The illuminated displays coincide with a mass mailing of “End Polio Now” postcards to heads of state in some 40 countries worldwide, encouraging governments to continue or increase their commitment to polio eradication, a goal more than 99 percent achieved.

In addition to the landmark light displays, Rotary clubs worldwide have planned a variety of polio eradication awareness and fundraising activities surrounding Feb. 23. Examples include:

• In South Africa, a “Kick Polio Out of Africa” awareness campaign will launch on Feb. 23, with the symbolic kicking of a soccer ball in Cape Town, host city to the 2010 World Cup. The soccer ball will travel through 22 high-risk countries on the continent en route to the June, 2010 Rotary International Convention in Montréal, Québec, Canada.

• In the United Kingdom, beginning Feb. 23, Rotary members will solicit donations in exchange for a spot of purple dye on each donor’s pinkie finger. That’s how Rotary volunteers and health workers in developing countries record that a child has received the oral polio vaccine. The ensuing Purple Pinkie Week will include purple beer specials at a local brewery and selling tickets and purple wristbands for a special soccer match in which the home players will wear purple jerseys bearing the End Polio Now logo.

• In South Carolina, USA, the week of Feb. 21 has been declared Rotary Polio Awareness Week across the entire state.

Polio eradication has been Rotary’s top priority for more than two decades. The international humanitarian service organization is a spearheading partner in the Global Polio Eradication Initiative, along with the World Health Organization, the U.S. Centers for Disease Control and Prevention, and UNICEF.

Rotary recently pledged to raise US$200 million to match $355 million in challenge grants from the Bill & Melinda Gates Foundation. All of the resulting $555 million will be spent in support of eradication activities.

Great progress has been made, and the incidence of polio infection has plunged from about 350,000 cases in 1988 to fewer than 2,000 in 2009. More than two billion children have been immunized in 122 countries, preventing five million cases of paralysis and 250,000 pediatric deaths.

Rotary club members worldwide have contributed more than $900 million and countless volunteer hours to the effort and are now working aggressively to raise the $200 million needed to match the Gates Foundation grants. The money is needed to help close a funding gap that could undermine two decades of progress. To learn more about polio eradication, including how to participate in this historic effort, visit www.rotary.org/endpolio today.

For video and still photos go to: www.thenewsmarket.com/rotaryinternational

Rotary – an organization of business and professional leaders united worldwide in humanitarian service - has more than 1.2 million members in more than 33,000 clubs in over 200 countries and geographic regions. For more information, visit www.rotary.org.