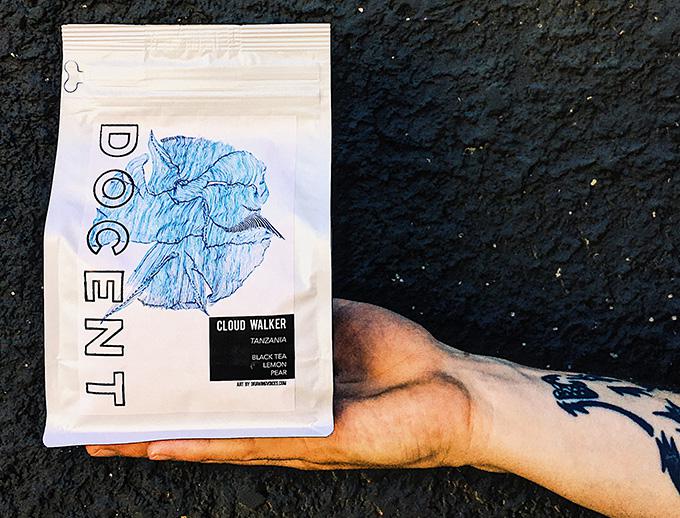 Atlanta, GA – Can you experience amazing craft coffee, and truly unique local art, without the often times fancy, pretentious, and exclusive circumstances and atmospheres that surround the two? Docent thinks so, which is why they hope their laid back approach towards both, and their new roastery (hopefully) opening in October, will help make local craft coffee and art more approachable, accessible, and inviting.Located in the Old Fourth Ward, Docent’s roastery will occupy the building in which Café + Velo currently resides. Like it’s predecessor, Docent will have a retail coffee and café component open for breakfast and lunch. In addition to serving many of the same popular menu items adored by Café + Velo patrons, such as fresh in-house baked croissants, sandwiches, and toasts, Docent will also be adding a few of it’s own additions like acai bowls, vegan options, a wider variety of coffees, and extensive tea program.Born out of a desire to intertwine the creative communities that coffee and art have traditionally helped create and foster, Docent’s goal to bring craft coffee and local art to a wider audience begins with its acknowledgement (and intentional avoidance) of a lot of the clichés that they believe dissuade many people from whole-heartedly embracing (or even trying) specialty coffee, and/or exploring their local art scene.“Our goal is to bring community back into coffee, and share with as many people as possible all of the positive experiences great coffee and art can bring to people’s lives ”, says the company. “We’re pretty pumped to be serving the communities of Atlanta (and beyond), and we hope Docent gives us the opportunity to further promote craft coffee on a local and national scale”, says roastmaster Nolan HallSimilar to its namesake, Docent wants to guide more people toward not only new and more approachable experiences with great coffee, but great art as well. Each of their ten current coffees feature a local artist’s work (and website) on the front of each bag (R.Land, Kyle ‘BlackCatTips’ Brooks, and Sarah Emerson to name few). This, in conjunction with individual artist pages on their website and a series of curated events and shows featuring their label artists, is just one of the ways Docent attempts to use their business as a promotional vehicle for the local art scene.With online sales of their already ten different offerings nationwide, and having been somewhat quietly served in retail locations around town (and local events via their mobile barista cart) for a few months now, Docent’s brand of affordable quality, approachability, and community is beginning to resonating with businesses and customers alike. Yet the fledgling company is already facing an unexpected challenge.One of the company’s investors was forced to abruptly leave due to a personal emergency; taking a significant amount of capital that was intended for the business with him. Unfortunately for Docent, this occurred right before the small roaster they custom built themselves began to show signs of an early death, but after they had committed to the lease for their retail space. Now faced with the unexpected financial obligations for both a new coffee roaster, and a lease, Docent realistically acknowledges the hurdles, “When you’re passionate about something, you sometimes have to roll the dice...especially when you have no other choice”.In an effort to make up for the unexpected loss in capital, Docent has started a Kickstarter campaign http://kck.st/2PpRwkL aimed at raising the needed funds. “We look at it as our ‘present loss’ is our future customers’ gain”, says the company, who has worked hard to structure their campaign to not only reward backers with a lot of the same things they would be purchasing in the store, but also is offering packages and items exclusive only to the Kickstarter. “Docent Coffee will (hopefully) be located at 381 Edgewood Ave. SE. Serving coffee, tea, baked goods, and made-to-order light fare from 8am-3pm T-F, 9am-3pm Saturday and Sunday. Kickstarter - http://kck.st/2PpRwkL For more information/images email info@docentcoffee.com or visit: www.docentcoffee.com | social media @docentcoffeeAn art-lovin' Atlanta-based coffee roaster that aims to bring community back to craft coffee.381 Edgewood Ave. SE Atlanta, GA 30312

02-22-2018 | Science & Education
Conference Series
Preventive Oncology 2018 Atlanta, USA
4th Annual Conference on Preventive Oncology Preventive Oncology 2018 is the study for preventing cancer to develop, rather counteract the advancement in progression of different malignancy which is going to be held in Atlanta, USA on July 18-19, 2018. Annual congress on Preventive oncology 2018 has taken an initiative to join the assorted research and business groups working in this field under one rooftop to explore each and every part of
04-01-2012 | Advertising, Media Consulting, …
DMC Atlanta
DMC Atlanta Proud to Become GACE Sponsor
DMC Atlanta, Inc. 1200 Ashwood Parkway STE 170 Atlanta, GA. 30338 (770) 817- 4646 – Phone (770) 817- 4647 – Fax www.dmcatlanta.com jenna@dmcatlanta.com Atlanta, GA – March 31st, 2012 - DMC Atlanta is proud to announce that they have signed on for 2012-2013 as an official sponsor of the Georgia Association of Colleges and Employers (GACE - www.gace.org). Although DMC has been involved with GACE in the past, this is the first year as an
07-27-2011 | Energy & Environment
MNE
Atlanta Electrical Contractor Lights Up Faces
Atlanta, Ga. – July, 2011 – My Neighborhood Electrician is spoiling customers through electrical work. Their employees are trustworthy and the work is reliable. They are the premier Atlanta electrical contractor, servicing both residential and commercial customers’ needs. Being the premier commercial electric company, My Neighborhood Electrician takes the utmost precautions when choosing employees. Prior to joining the company, each potential employee is checked in order to ensure customer’s security and
07-18-2011 | Sports
http://www.beltline.org
ATLANTA BELTLINE RUNNING SERIES ANNOUNCES SOUTHWEST 5K
Saturday, July 16 Run/Walk Will Include Friendly Competitions Between Atlanta Police and Fire Departments, As Well As Post-Event Food, Activities and Fun ATLANTA (July, 2011) The Atlanta BeltLine Running Series announces its second event, the Atlanta BeltLine Southwest 5K. A Run/Walk along the Atlanta BeltLine Southwest Trail and through the historic West End and Westview neighborhoods, the Southwest 5K race course is a great way to explore local parks, connect with
02-12-2010 | Business, Economy, Finances, B …
Vistage International
Announcing Vistage Information Event (Atlanta)
Vistage International, the world’s leading chief executive organization, and Lauch McKinnon, Group Chair, Vistage International, will be hosting a complimentary, informational event for visionary business leaders at the Ravinia Club, Two Ravinia Drive in Atlanta on Tuesday, February 23. Seating is available for the morning session from 7:30 to 9:30 a.m. (complimentary breakfast served) and the afternoon session from noon to 2:00 p.m. (complimentary lunch served). One must
03-09-2007 | Arts & Culture
Angela Moore
Atlanta Artist Xplosion 2007
CREATIVE FINE ART HOSTS ARTISTS XPLOSION, A FINE ART SHOW IN ATLANTA ON MARCH 16, 2007. COME OUT AND ENJOY A NIGHT OF BEAUTIFUL ART AND LIVE JAZZ! ATLANTA, GA., March 7, 2006 – Creative Fine Art invites the public to come out and enjoy a night of art and live jazz. Creative Fine Arts will host Artists Xplosion, a fine art group exhibition of emerging and established
Comments about openPR
We publish our press releases on openPR.de because we like people who are "open" - just like us.
Frank Obels, CEO, INCONET - Informationssysteme, Communication und Netzwerkberatung GmbH