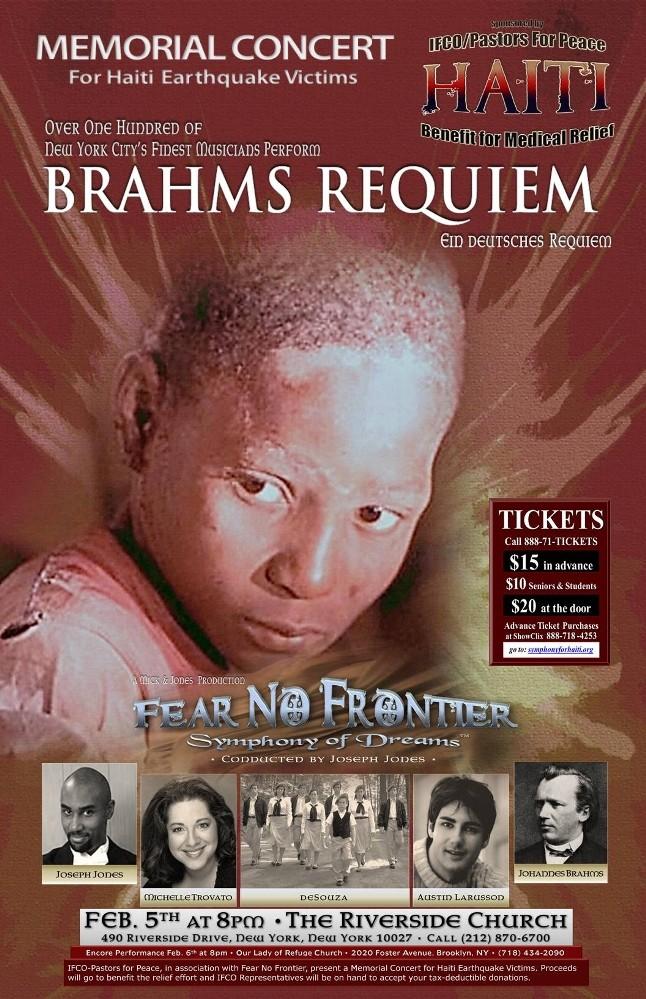 Classical Music World Thunders into Relief EffortNEW YORK, NY, JANUARY 30, 2010: As the team of newly graduated doctors and interns begin their trek through the devastated Haitian countryside, they know only that they expect to find widespread death, broken bones, disease and famine. They also know that their backpacks, now stuffed with bandages, antibiotics and analgesics, will soon enough be empty. Their hope lies in a dark wonderland of incomprehension. Will the reinforcements arrive in time, or at all, with replacement supplies, food and some relief for them? What they don’t know, and are certainly unsure of, is whether or not relief will come at all. Neither do they have any idea that some two thousand miles away, hundreds of people - musicians, singers, actors, fund raisers and their supporters are preparing for a huge Memorial Benefit Concert designed to get money into the hands of those who will be carrying those replacement supplies and bringing more personnel to bolster their mission. Enter IFCO/Pastors for Peace and other groups like them. Enter the Fear No Frontier / Symphony of Dreams.So, how often do you get to see an awesome concert, the likes of which you have probably never seen before, and even get a charitable tax-deduction for the trifling price of the ticket too?For the thousands of Haitians who live in the metropolitan New York area and may have lost loved ones in the earthquake, this may be the first Memorial Concert performed by a large symphony orchestra intended to commemorate the victims of the tragedy. Over 100 of New York City's finest musicians come together to present a "once-in-a-lifetime" performance of the venerable Brahms Requiem at the majestic Riverside Church in Manhattan on Friday Feb.5th at 8:00PM. The inside of church itself is a visually stunning 2,500+ seat venue with a towering interior and imposing balcony seating. There will be an encore performance the following night, Saturday Feb. 6th, also at 8:00PM, at the Our Lady of Refuge Church in Brooklyn. Classical music aficionados, often moved by ensembles performing quotidian fugues and sonatas will be absolutely drooling with delight at Fear No Frontier's Symphony of Dreams, a new Philharmonic Orchestra and Choir conducted by the masterful talents of the soft-spoken and unassuming young maestro, Joseph Jones. Jones, himself a consummate performer, tenor-baritone, timpanist and conductor, has appeared with the MIT Summer Philharmonic, the Moscow Symphony and the Orchestra Sinfonica de Coyo in Argentina. Fear No Frontier's Symphony of Dreams performance of Brahms Requiem also features soprano Michelle Trovato, winner of numerous national and international awards from Albania to Washington (including the Metropolitan Opera National Council) and baritone Austin Larusson, with a Special Guest Appearance by "deSouza" ~ an a capella family singing group from Australia with music sales and fans spanning the globe.Sponsored by IFCO/Pastors for Peace (ifconews.org), Fear No Frontier ~ A Symphony of Dreams is presenting this Memorial Concert Benefit not only to commemorate those lost in the Haiti earthquake tragedy, but to also help get immediate medical support to those still living and desperately struggling to survive in the devastated little country. Ticket prices are low, so the large Haitian community in New York and many others who don't normally get to see a grand performance such as this will be able to experience the commemoration. IFCO/Pastor for Peace Representatives will be on hand to accept the tax-deductible donations. Visit symphonyforhaiti.org for more information.Proceeds will immediately go to provide medicine and other relief supplies for doctors and medical personnel coming into Haiti on the ground through Santo Domingo and hiking through the devastated country to the outer lying villages and camps that are receiving little, if any, of the relief effort. In Haiti, the poorest country in the western hemisphere, it has been projected that over 200,000 people died and over 250,000 have been injured. Almost 1,000,000 people are now homeless.Fear No Frontier's trust-bond is to raise awareness of worldwide suffering and injustice, and to take action to help correct these conditions. The IFCO/Pastors for Peace is a special ministry of the Interreligious Foundation for Community Organization, and was created in 1988 to pioneer the delivery of humanitarian aid to Latin America and the Caribbean.###For more information or interviews on this subject please contact Mick Roberts at 413.388.3684 or Joseph Jones at 347.891.1999Atcasco Media represents Fear NO Frontier / Symphony of Dreams For booking information contact Mick Roberts at 413.388.3684Fear No Frontier / Symphony of Dreams is a neo-classical musical performing artist troupe whose mission is to raise awareness of worldwide suffering and injustice, and to take action and inspire others to take action to help correct these conditions however possible.Fear NO Frontier c/o Atcasco Media 10 Bush Street Westfield, MA 01085Press contact: Mick Roberts

You can edit or delete your press release Symphony of Dreams: Haiti Memorial Benefit Concert here

06-03-2019 | Business, Economy, Finances, B …
Cape Fear Pro Wash, LLC
CAPE FEAR PRO WASH RANKS #1 IN REVIEWS
WILMINGTON, NORTH CAROLINA - JUNE 1, 2019Cape Fear Pro Wash is excited to announce reaching a huge milestone. They have reached over 150 5-star reviews across Google and Facebook and obtained the title of the #1 rated exterior cleaning company in the Wilmington and Hampstead, NC area. This comes as no shock since Cape Fear Pro Wash has been known for their exceptional service and wide range of cleaning
09-19-2018 | Energy & Environment
RenewSys
No Fear, RenewSys’ Dr. PV is Here!
- India’s first & only such initiative, the RenewSys ‘Module Wellness’ Programme tests PV module health - A service provided at Zero Cost to RenewSys Encapsulant and Backsheet customers RenewSys launches a PV Module Wellness programme at the Renewable Energy Expo, Delhi. This unique and exclusive initiative launched by the RenewSys’ Bengaluru division, will allow customers to test their PV modules at the RenewSys’ Reliability Lab at no cost. RenewSys understands that
07-13-2018 | Tourism, Cars, Traffic
Airport Express Car Parking
Sydney International Airport Parking – Fear of Flying?!
Although flying is one of the safest ways to travel, this fact does not help those people who are having fear of flying. Many studies have shown that millions of people are afraid of flying, despite the very low number of accidents compared to other types of transport. As with all other fears, there are few ways in which fear of flying can be overcame. Look at fear as an unpleasant
03-20-2017 | Arts & Culture
Aaron Clark
Contemporary Gospel Ensemble Aaron Clark & Ministry Eradicate Fear With Upcoming …
Aaron Clark understands the power of fear. He has seen its potential to cripple him and is determined to rid it from his life. The singer, songwriter, assistant minister of music and Gospel ensemble group leader wants to help others do the same. Known as a favorite in his hometown of Springfield, Ohio, he will share the message of faith at his upcoming live recording of No Fear, All Faith.
11-21-2016 | Health & Medicine
FWF - Austrian Science Fund
No fear! Neuropeptide may aid targeted anxiety therapy
The targeted control of biochemical processes and neuronal signalling pathways using the messenger substance neuropeptide Y could help in the future treatment of anxiety disorders. This is demonstrated in research findings by the Austrian Science Fund FWF, which were recently published in the scientific journal "Neuropsychopharmacology". Palpitations, sweating and sleep problems – most people have already experienced symptoms of anxiety. As a response to danger, fear is vital for our survival.
11-15-2011 | Business, Economy, Finances, B …
Kindred
Fear of Failure Prevents UK Workers Starting Up
Fear of failure prevents UK workers starting up - London, UK, November 14, 2011 New services http://www.businesslink.gov.uk/newservices launch to help entrepreneurs Mark Prisk launches new Business Link services to support entrepreneurialism and business growth http://www.improve.businesslink.gov.uk/ A quarter of the working population believes there are good opportunies to start up new businesses where they live[i], but a fear of failure could prevent one in three workers from starting up on their own[ii]. New
Comments about openPR
OpenPR ist the nicest and most clearly laid out PR platform I have seen to this day. The press releases are displayed very nicely and clearly and without any unnecessary frills. The updates are fast and the finished release looks appealing and is clearly legible. Even with 16 years of experience one discovers new things from time to time. Congratulations!
Gabriele Ketterl, Director Marketing & PR, Menads